We get factory orders today, a yawn for most now that we got GDP last week and the PMI’s. Last time, new orders were up a hefty 8%, which looks nice on the chart but was less than 9.8% expected and failed to recover all of the previous month’s collapse (13.5%).

We think the competence of governments counts. In Europe, despite the uncertainty over which court has the most power and ridiculous bureaucratic nonsense that surpasses even India’s propensity to tie itself up in red-tape knots, there is an underlying acknowledgement that government owes something to the people. Hence European labor laws and welfare programs.

In contrast, in the US citizens are supposed to be self-sufficient frontiermen who wouldn’t take anything from the government even if it were offered. The myth of the independent American is so strong that some who fancy themselves ultra-conservative/libertarian find nothing hypocritical in accepting Social Security and Medicare, never mind unemployment benefits—and yet those are socialist programs down to their bones.

At the moment the US government is failing to deliver much needed unemployment benefits to some 30 million persons, not to mention a renewed moratorium on evictions/foreclosures and other emergency measures. The loss of income and housing security will lead directly and one-to-one to a loss of retail spending and at the next remove, a drop in capital spending. This is obvious. We can look at existing “activity indices” but what counts is future activities, and that is something no survey or crystal ball can tell us.

As a small aside, consider that the lack of money (and a surplus of time and Stuff) is leading to a new interest in… barter. This is not really a failure of the money economy, but a social movement. It’s going to be interesting because barter escapes formal statistics gathering and taxation. Like the gray economy, which may be as much as 10% of the US economy, barter will not get included in our statistics.

If we expect activity in the US to decline and perhaps sharply, depending on how long the government dithers and how much the new recovery bill falls short, we need to count the ways this affects future information. Top of the list is inflation, which you don’t get if demand falls off the cliff, even in the presence of supply constraints. Second is the chain of activity that arises from the multiplier effect. Longtime readers know this is one of our hobbyhorses—the Fisher equation. Money supply times the velocity of money equals GDP times inflation. It’s simple and it’s useful. The drop in velocity is why the vast increase in money supply when QE was introduced did not result in inflation, as we wrote at the time. Ah, the good old days when Mr. Bernanke ruled and not the Orange Menace. 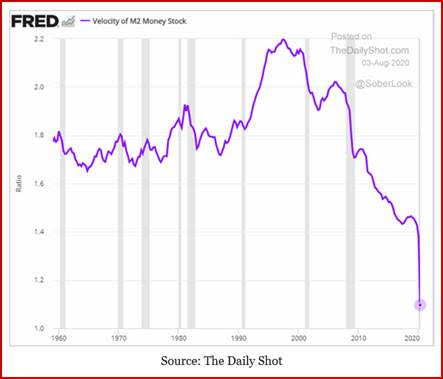 Now we have the Fed and Treasury pumping out money left right and center and to all comers, qualified or not. But if the money gets spent once and is not multiplied by bank lending and additional rounds of activity, you don’t get rising GDP on the right-hand side of the equation. See the chart, copied by the Daily Shot from the St. Louis Fed. (We are not the only one with this hobbyhorse). 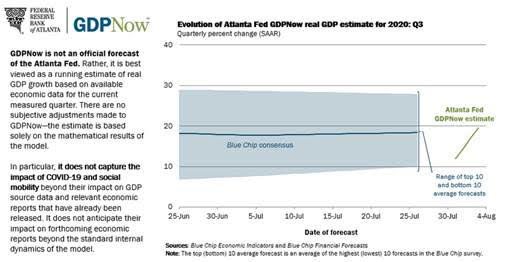 But unless we start getting some money velocity, those happy nowcasts will fail. The US economy needs constant injections of adrenaline and sugar, and it’s not getting it. Bottom line, Europe and some other countries (China) will lead the growth sweepstakes, and the US horse is falling at the third jump. That bodes ill for the dollar, once we get past this pullback.

Tidbits: A semi-bombshell comes in the form of the US Distract Attorney in NY filing a subpoena for 8 years of Trump financial statements and tax filings, as the Supreme Court ruled he can do. The purpose of the investigation is to decide whether to file charges of fraud against the Trump Organization. One basis for this is the testimony of Trump’s lawyer Cohen, who said the two sets of documents will show Trump inflated net worth to banks and insurance companies. Trump’s lawyers appealed on the grounds the subpoena is too wide-reaching and the prosecutor responded that it’s wide because the crimes are numerous and varied, and the investigation reaches far beyond just the bribes to hookers. It’s even possible that if Trump is not cleared, he will be charged—before the election, although we won’t get to see the actual documents unless and until they are presented at trial. What fun.

Tigers-and-stripes Dept: Looking for a distraction from the pandemic, Trump wants the federal court system to seek the death penalty for the Boston marathon bomber. The federal prosecutors did seek the death penalty and did get it, but now a new penalty phase trial will be held after a federal appeals court threw out the death sentence on the grounds the judge had not screened the jurors for bias. Talk about jury tampering by Trump! The appeals court judge who wrote the decision said “But make no mistake: Dzhokhar will spend his remaining days locked up in prison, with the only matter remaining being whether he will die by execution.” Most conservatives and certainly the Trump wing favor the death penalty. Lots of liberals do, too, but only in cases where guilt really is proved, unlike so many death row cases cleared years later with DNA evidence.

Mother Nature: The hurricane has passed full force here near the Virginia coast but the wind is still at about 30 mph and it’s pouring rain by the bucket. The hummingbirds are bravely returning to the feeder again and again. How does a hummingbird that weighs 4 grams (less than 0.15 oz) not only fly, but hover in a 30 mph wind?