Market Summary: Stocks were little changed yesterday. The S&P 500 ETF (IVV) finished higher by 0.05%. Long-term Treasuries and gold were the clear winners in the asset class department as interest rates on the 10-year Treasury note fell 5 basis points. Commodities were hit hard as copper and crude oil both fell over -1% on the day. 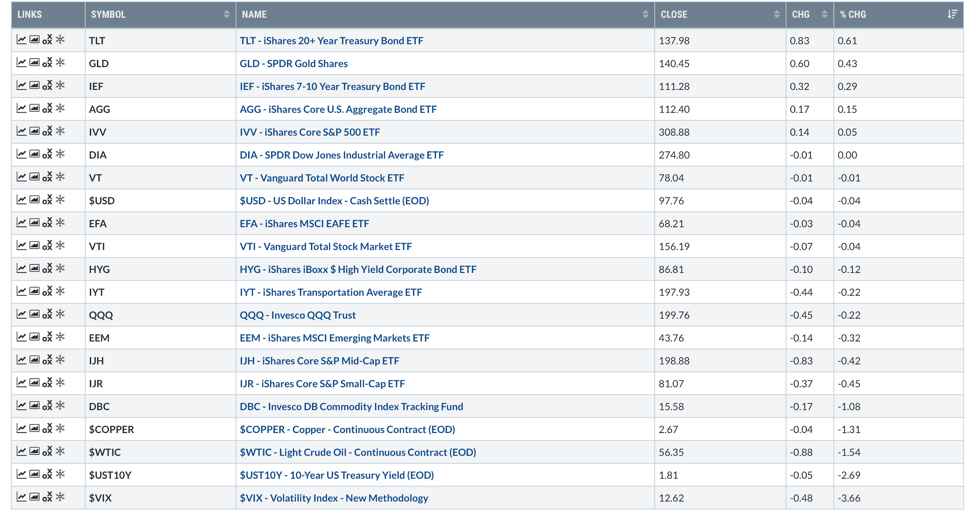 Economic Data: U.S. manufacturing productivity came in at -0.10%. This is up from the lows but still negative. This is yet another sign that although data has improved, it remains suggestive of a slowing economic growth environment. 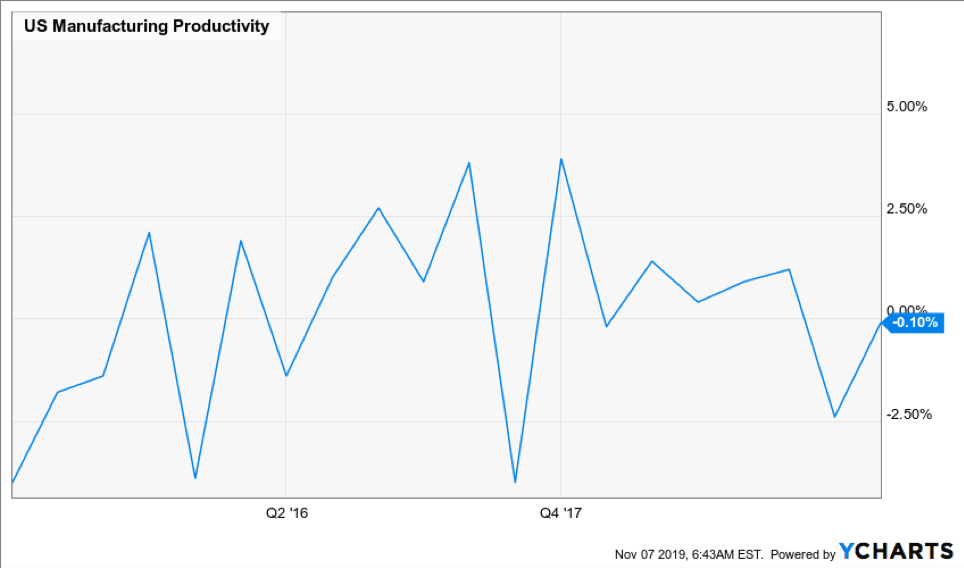 Gold: Gold has continued to consolidate in a positive trend, holding above its rising 200-day moving average and above recent support. Similar to long-term Treasuries, it appears to be forming a triangle pattern. Triangle patterns are historically continuation patterns, but nothing is guaranteed. We will be watching for a breakout to new highs in gold to confirm a continued positive trend. A breakdown would suggest more downside for precious metals.

Copper: Copper remains below its 200-day moving average, although it is holding above support. Copper is not confirming the move higher in global stocks and is indicative of the fact that stimulus and lower interest rates are supportive of asset prices, but not necessarily economic activity. We would expect copper to move higher in an environment where global manufacturing data is also accelerating. That is not the case today. Liquidity drives markets, just not the copper market apparently.

West Texas Crude Oil: Crude oil rallied to the 200-day moving average and failed in its attempt to break above this important moving average. It is currently still in a negative trend. A breakout to the upside could indicate a move higher in global economic data and inflation expectations. A continued downtrend is indicative of deflationary pressures.

Chart of the Day: Record cash on the sideline? Not so fast. When you compare the amount of money in money market funds relative to other assets, the amount in cash is actually pretty low. Are investors all in? 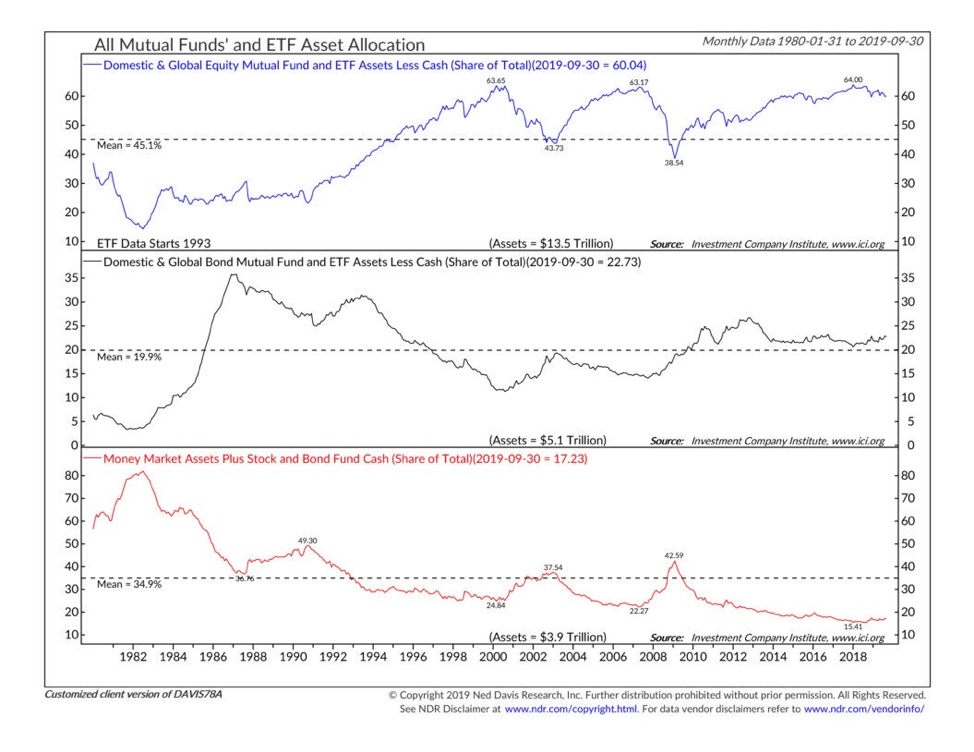 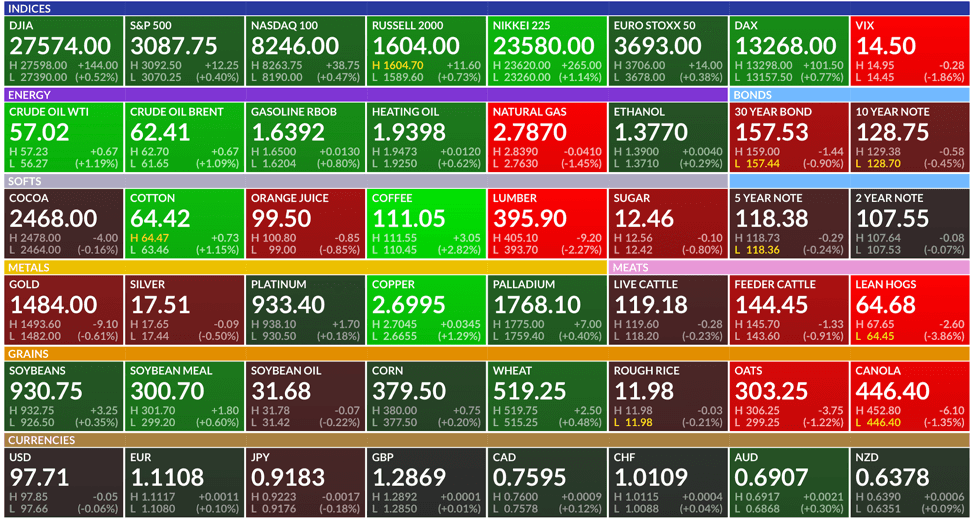 The U.S. and China agreed to roll back tariffs on each other's goods in phases. For an initial deal, both sides should withdraw existing additional taxes in the same proportion simultaneously, which is "an important condition," the Commerce Ministry's Gao Feng said. If it's confirmed by the U.S., it may provide a road-map toward de-escalating the trade war. The removal of tariffs is China's key demand.

U.S. equity futures jumped with 10-year Treasury yields and oil as the trade pendulum swung back to positive. The dollar and gold slid. European and Asian stocks rose and the yuan strengthened. The pound gained with most major currencies before the Bank of England rate decision.

Two ex-Twitter employees were charged by the U.S., along with a Saudi national, for helping Riyadh spy on dissidents by hacking into their accounts. They were allegedly bribed to mine for data about regime critics and thousands of other users. Twitter said it is committed to protecting its users. Read more about how despots use Twitter to hunt opponents of their regimes.

Rudy Giuliani stirred up the impeachment probe. He tweeted that his controversial work with Ukraine—at the center of the House investigation—was done "solely as a defense attorney" for President Trump, undercutting the administration's claims that he was advancing U.S. foreign policy. Giuliani previously denied bypassing official diplomatic channels. Follow the developments with our Impeachment Update.

Alphabet's handling of sexual harassment and misconduct allegations against executives is being investigated by the board. Earlier this year, it formed a committee to consider claims by shareholders in lawsuits "relating to past workplace conduct." They include the behavior of Chief Legal Officer David Drummond, who's accused of having relationships with employees, CNBC reported.