The entire precious metals sector rallied yesterday, but the upswing was particularly visible in case of silver and (especially) mining stocks. Both: silver, and miners moved to new October highs. Silver’s breakout was tiny, but miners rallied relatively significantly and that’s the part of the current long trade that’s particularly profitable. Of course, these profits are near to nothing compared to what’s likely ahead in case of the big short trade that we plan to profit on in the following months, but they add their part to the overall results. Please note that a small long position here also means staying temporarily out of the short position, which brings the likelihood of re-entering them at higher prices.

Let’s take a closer look at what happened. 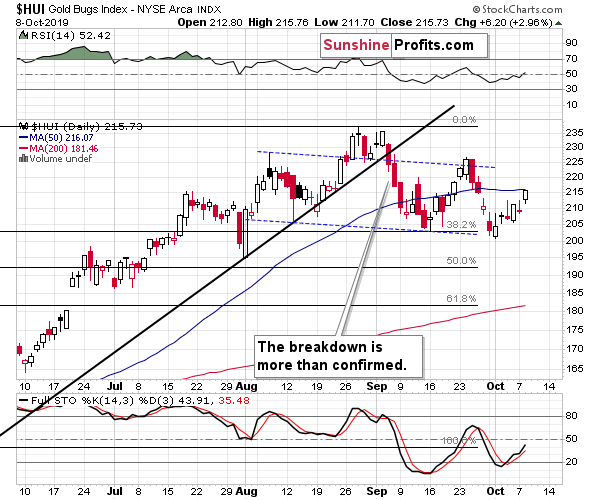 Gold miners rallied almost to their 50-day moving average and well above the previous October highs. Neither the RSI, nor the Stochastic indicators suggest lower prices in the near term. Still, let’s keep in mind how both indicators are supposed to work.

The RSI is likely to tell us when the HUI Index is overbought on the short-term basis, and the Stochastic indicator is likely to confirm the trend’s reversal with its sell signal after it already takes place. In this case, we don’t want to wait for the confirmation because of all the important factors that point to lower precious metals prices in the following weeks. Conversely, we want to cash in the profits from the long positions once the easy part of the rally is over. Is the easy part of the rally over? Almost, but not yet. 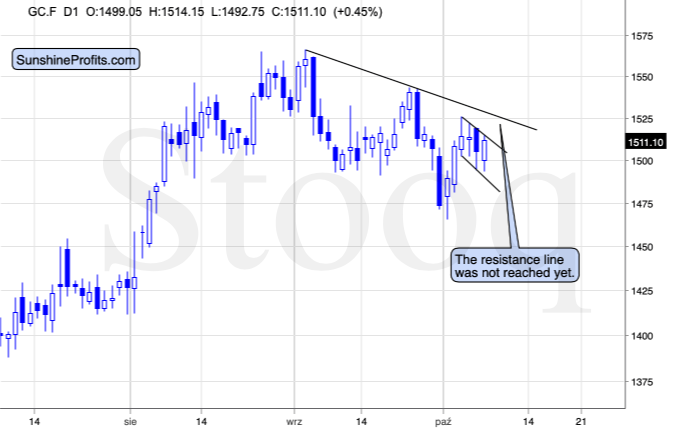 Because the resistance line in gold was not yet reached, and because of the move above $1,500 and the neck level of the previous head-and-shoulders pattern as more visible rally had been likely than what we’ve seen so far.

The recent back and forth trading seems to be a flag pattern. This in turn tells us that the move that follows the consolidation is likely to be relatively similar to the move that preceded the pattern. This suggests a moved to the late-September high. However, let’s keep in mind that the declining resistance line also provides important resistance and gold might not be able to rally that far.

In other words, a move to about $1,540 or so is still possible, but it’s not as likely as the move to the declining resistance line that’s a bit below $1,530. The (hypothetical) part of the rally above $1,530 would no longer be “easy” – it would be risky. And it’s usually better to stay out of the risky trades, while focusing on those that are confirmed by multiple signals instead.

Silver On the Rise 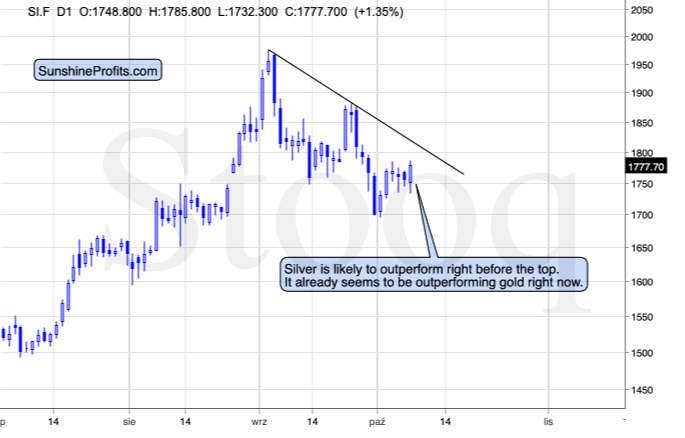 Yesterday’s rally in silver was bigger than the one that we saw in gold, but not yet huge. This suggests that the rally might not be over just yet. The final days of the rally are often characterized by huge outperformance of silver and that’s not what we saw yesterday. This outperformance is what usually makes people eagerly jump into the market, believing that the white metal is taking off. But it’s not a rally bullish signal – it’s an ambush after which silver price starts to decline – often in a dramatic manner. Consequently, it seems that we’re going to see a day or a few days of higher prices before silver drops once again.

Summing up, the big decline in the precious metals sector appears to be finally underway, but based on gold’s invalidation of the breakdown below the head-and-shoulders pattern, a quick rally is more likely to take place in the very near term. Most likely, the rally will be short-lived and it will end this or the next week.

Due to miners’ strength, we are moving the profit-take levels for them higher.

Once gold reaches the predefined gold price target, we think it best (from the risk to reward point of view) to take profits off the table in case of the long positions in gold, silver, and mining stocks, and open the big short position in them that are in tune with the main trend.