Skip to main content
;
The Mexican Peso has been under pressure recently, from a variety of factors. These include a global oversupply of crude oil, a slow growing US economy and the potential of a US Fed rate hike in 2015. Since the United States is Mexico’s top export destination, the machinations of the US economy and Federal Reserve policy decisions have great effect on the Mexican Peso. So much so, in fact, that the Bank of Mexicoi has changed its policy meeting schedule for the remainder of 2015, to be held on the day after Federal Reserve policy meetings. This revised schedule gives the BOM better flexibility to coordinate actions relative to the US Dollar. Further, considering that 70% of Mexican exports are destined for the US, and the lion’s share of those exports is targeted at the US consumer retail market, the Bank of Mexico must react to Fed’s policy decisions.

A 9 month chart of USD/MXN demonstrates a steady weakening of the Peso vs the Dollar. From the low of 13.40375 Peso to the Dollar, the Peso has weakened 22% to 16.42486 to the greenback as of 29 July. What has been the main drive of Peso weakness and does the BOM desire Peso weakness to stimulate the Mexican economy? 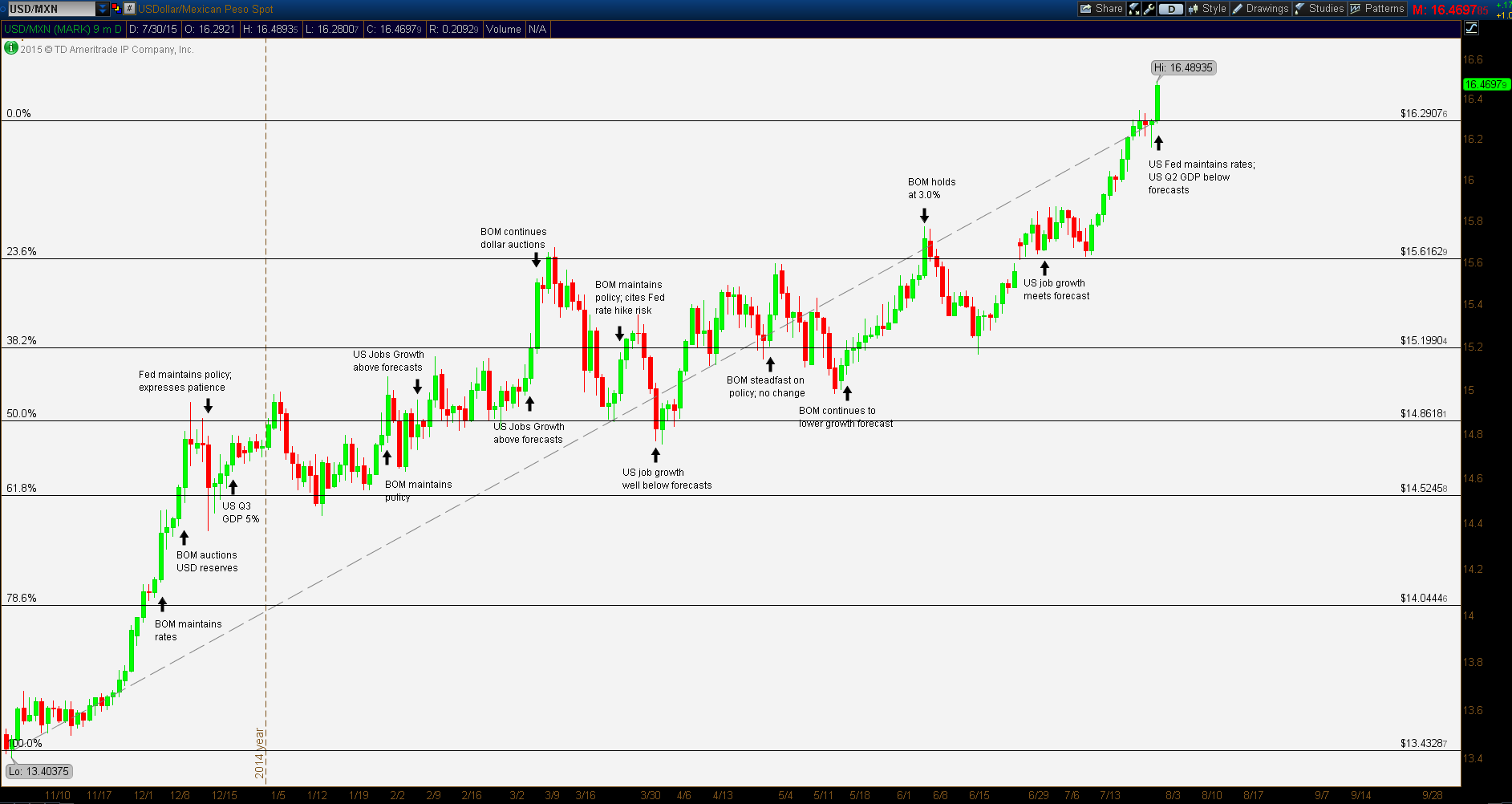 Late in 2014, BOM governor Agustin Carstens was lowering expectations, after already reducing growth expectations to 2.3%, on the economy citing the harsh winter in the US, falling oil prices and low overseas interest rates. In the following week, Mexican GDP came in below forecasts at 2.2% and full year expectations were lowered again.

The slowing Mexican economy and increasing expectations of a US Fed rate hike put Governor Carstens in a difficult position. Indeed, at the 5 December meeting the BOM decided to leave rates unchanged. This makes sense since if the Fed raised rates it would have strengthened the dollar vs the Peso, thus serving the same purpose as a BOM rate cut. The Peso had already weakened to 14.3660 to the Dollar; down 7% since the November low. However, without the Fed rate hike plus the slowing Mexican economy the Peso weakened rapidly anyway. Unable to risk a rate cut with consumer prices near the upper end of the target range, a week later the BOM auctioned $200 million USD to slow the sharply weakening Peso. Being in front of the Fed was a clear disadvantage as the BOM would have to literally guess at the Fed’s upcoming decisions.

At the 17-12-2014 meeting, the US Fed expressed its willingness to be ‘patient’ with its policy decisions. The Peso soon continued on its weakening trend and the BOM expressed concerns about rising domestic prices. If the BOM was forced to raise rates to slow inflation in an already slow economy, the results might be disastrous. Relief seemed to be on the horizon, however, as US Q3 GDPvi increased on accelerated consumer spending indicating a possible rate hike early in 2015.

USD/MXN began 2015 10% above its November low; the Euro had fallen to a nine year low, and the US Dollar was in a sustained rally against most majors. The ECB bond buying program, yet to be initiated, was expected to create some capital inflows to Mexico, supporting the Pesos. The BOM maintained its policyvii at the 29-1-2015 meeting. It seems that with inflation right at the top of the BOM range combined with a slow economy, the BOM’s hands were tied and that it had to rely on the monetary policy of the US and Europe. In response to falling oil prices, the government cut its budget to make up for lost revenues. Further, the BOM reduced growth forecast, again, in mid-February. At this point it seemed that the BOM would have no choice but to cut rates and risk inflation. However, the BOM held steady, this time and actually cited the impact of an expected US Fed rate increase.

USD/MXN closed 26 March at 15.1417; the BOM continued to auction $52 million USD per month to support the Peso. If Governor Carstens didn’t have enough concerns, his hopes of a dollar strengthening were dashed by the US April jobs report, significantly below forecasts and dividing the Fed’s policy maker’s opinion on the direction of the US economy. At the 29 April meeting, the Fed maintained rates. As the old saying goes, ‘hope springs eternal’ and the BOM followed up and steadfastly held the benchmark rate at 3% at the 30 April meeting. The market clearly expressed disagreement and the Peso continued to weaken USD/MXN reaching 15.4570 by early May.

In mid-May, the Bank of Mexico continued to lower its 2015 growth forecasts, down to 2.0% from 2.5%, and continued to auction USD reserves; at the June meeting, the overnight deposit rate was maintained at 3.0%xii. At around the same time, the IMF and World Bank had publically recommended that the US Fed delay its planned rate increase until Europe stabilized.

At this point it’s worth noting that the Bank of Mexico succeeded in keeping the Peso with its inflation target range. On the other hand, it might have read the Fed wrong in that a gradual tightening would not have created a wide enough differential between benchmark rates to cause enough capital outflows thus weaken the Peso. It should also be noted that, according to released Fed minutes indicated that US Fed Chair Yellen is walking a tightrope, keeping markets on the back foot and simultaneously managing a board with a strongly divided opinion.

If anything critical is to be said of the BOM’s round-about policy actions relative to the Fed, it appears to be a lack of communication between the central banks of the two NAFTA members.

As it stands now, after the 30 July meeting, the BOM still maintains a 3% overnight rate, the Fed maintains a 0.0% to 0.25% Fed Funds target rate, US economic data is still mixed and there’s concern over the slowing demand in the Asia Pacific region. The markets seemed to have been ahead of the BOM over the past 9 months. Since it is less likely that the Fed will increase rates in September it would be difficult, if not impossible, for the Mexican Peso to gain against the Dollar.
Feed news