Outlook: Existing home sales say something about consumer sentiment and we interpret the Redfin chart as wildly positive. As for the Fed, it was more hawkish than expected, with members split equally on raising rates next year and six seeing one hike and three seeing two. Remember that at the June meeting, nobody expected rate hikes next year, and many analysts spent all summer making the case that this was wrong. Well, the Fed has now responded to that group, including us, with the caveat that economic developments have to support it going forward. It’s a little surprising the dollar is not higher. 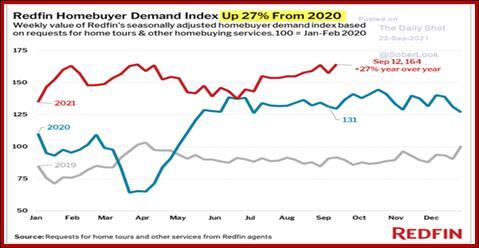 As for Evergrande, we do not have good reporting. The WSJ says the government told local governments to gear up their accountants. The FT muses about the consequences. But nobody is reporting from the company itself or investors. We assume the payment didn’t get made but we do not know. It’s surprising because in a capitalist economy, we’d know by now. Markets in China have closed without the Western press getting the information. This is definitely not good enough and is one of the quirks, if that’s the right word, of the Chinese version of capitalism that dirties its image. Information and nearly instant information has been the norm in the West for some 30 years. Withholding information is a serious breach of investors’ “reasonable expectations.”

As for the fallout, heroic short-seller Chanos joined the Lehman moment club, telling the FT “Evergrande’s crisis could be ‘far worse’ for investors in China than a ‘Lehman-type situation’ because it points to the end of the property-driven growth model in the world’s second-largest economy.” It doesn’t get any blunter than that.

Remember it took a full two weeks after the actual Lehman bankruptcy for the dirt to hit the S&P fan. Peter Tchir in Forbes has a piece about how Lehman was not a “moment” but a series of bad decisions over a long period of time preceding the crisis, including mortgage lending to wildly unqualified people, that created an unstable environment. A single company going under could not have had the big effects attributed to Lehman when the real problems were deep and wide. The same thing is likely true in China and that’s why Evergrande is only the tip of the iceberg. A vast amount of GDP, maybe as much as a quarter, is tied up in zombie apartments and ghost towns, plus the financial institutions and their heaven-only-knows accounting.

Last evening the FT offered a big story on Evergrande. Here are some nuggets: “Evergrande, for all of the high drama of its meltdown, is merely the symptom of a much bigger problem. China’s vast real estate sector, which contributes 29 percent of the country’s gross domestic product, is so overbuilt that it threatens to relinquish its longstanding role as a prime driver of Chinese economic growth and, instead, become a drag on it.

“There is enough empty property in China to house over 90m people, says Logan Wright, a Hong Kong-based director at Rhodium Group, a consultancy. To put that into perspective: there are five G7 countries — France, Germany, Italy, the UK, and Canada — that could each fit their entire population into those empty Chinese apartments with room to spare.”

Analysts say “the property sector is becoming a threat to financial, economic and social stability — it has already sparked protests in several cities. ‘It is very difficult to provide a compelling narrative that China’s potential growth will exceed 4 percent in the next decade,’” says one.

Whole world will feel it. Here’s a way of looking at it: China contributed 28% of global growth in 2013-2018. If that falls and by a lot, everyone else gets lesser growth, too.

The Evergrande crisis makes the Fed policy shift look like small potatoes. We continue to expect a fat fallout from Evergrande, with stocks markets dipping and safe-haven currencies benefitting. Until we get more news, we are in limbo.