“Volatility” is defined as the dispersion of returns of a security or the degree of variation of a trading price series over time. A market that is down 5% every day is, technically speaking, not volatile. One that’s down 5% and then up 5% is volatile. This is a volatile market. The S&P 500 closed up 6.0% but is now indicated in Asia at -3.7%. By comparison, for all of 2019 the largest one-day loss was -2.48% and the largest one-day gain was 3.43%, with the average daily change being ±0.55%. 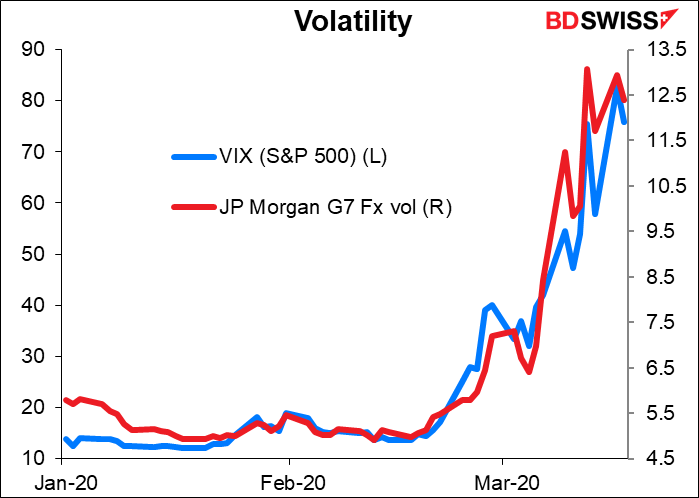 The big factor was the Trump regime’s massive turnaround in its view on dealing with the crisis. From “no big deal,” the administration is now discussing a fiscal stimulus plan that could amount to as much as $1.2tn, including a “helicopter drop” of money:  sending a check for $1,000 or more per person to Americans soon and more later if necessary. A group of Senate Democrats proposed legislation to send as much as $4,500 per person. Proposals also include various measures targeted at businesses too. The Fed said it would begin buying commercial paper, which will help to keep businesses afloat. The idea that the US is finally waking up to the seriousness of the issue has improved sentiment and pushed USD higher, although money can’t conjure up testing kits immediately, much less a vaccine.

European governments also seem to be reaching satori (the Zen Buddhist term for enlightenment) when it comes to the virus. German Chancellor Merkel even hinted that she’d be willing to consider what was once unthinkable: issuing joint debt for the Eurozone as a whole (rather than the current system of each country issuing and being responsible for its own debt). This has been utterly unthinkable for Germany up to now because it feared (rightly so, I’d say) that it would get stuck with the bill for spending in other countries. Yet Merkel said she was happy for German finance minister Scholz to explore the proposal, although she added that there are “no conclusions” yet. Joint debt would make it easier for fiscally constrained countries like Italy and Greece to deal with the problem.

Jean Monnet, sometimes called “the father of Europe,” once said, “Europe will be forged in crises, and will be the sum of the solutions adopted for those crises.” This looks like one of those times, if the problem finally brings fiscal integration to match the monetary unification of the Eurozone.

The British government too seems to have had a change of heart and realized that its plan to aim for “herd immunity” among Britons was really a plan to cull senior citizens. PM Johnson yesterday said, “We must act like any wartime government and do whatever it takes to support our economy.” More and more governments are using the “wartime” analogy, which implies ballooning debt and more control over the movement of populations.

If the world slips into a global recession (which seems likely) and everyone cuts rates to zero, what will cause currencies to fluctuate? I’d say it will be the perceived effectiveness of measures taken to deal with the crisis. Countries that addressed the issue early and appear likely to overcome the problem first will see their currencies recover first. In that respect, I remain bullish on EUR/USD, because regardless of the sudden US change of heart I think Europe is ahead of the US and for various cultural and structural reasons (national health care systems, for one) is likely to stay ahead.

It was striking though that despite the rare up day in US stocks and all the signs of a massive change of view in governments around the world, the commodity currencies all fell further and JPY gained. The FX market did not reflect the “risk-on” sentiment in the stock market.

Oil prices continued to fall, with WTI plunging an astonishing 11.6% yesterday despite the American Petroleum Institute (API) reporting a surprise drawdown of inventories in the latest week (the market is expecting a build of around 3.7mn – see below about today’s US Dept of Energy inventory figures). The price of oil has fallen in half (-51% to be precise) in less than a month, from its recent high of $54.50 on 20 February to $26.53 this morning. The main reason for the further decline was news that Saudi Arabia plans to boost oil exports by around 250k barrels a day (b/d) from April to May despite the plunge in prices. The report showed that Saudi Arabia is really serious about this fight for market share with Russia and the US shale producers.

The news about oil finally hit CAD, which was the worst-performing currency.

Gold was up and silver was down, down, down, bringing the gold/silver ratio back up to 121.5 this morning. The high this morning was 123.17, which was just below the all-time historical high of 123.78.

There used to be an FOMC meeting on the schedule for today, followed by a Bank of Japan meeting overnight, but both of those were moved up and took place on Sunday. So the main thing left on the schedule is tomorrow morning’s Swiss National Bank (SNB) meeting. I deal with that in today’s comment because it will probably be over before tomorrow’s comment gets out. It’s the last thing in this section as I’m writing everything in chronological order.

As for the indicators, rarely have I felt like what I do for a living had so little point. I’m going to write all about these indicators, and then two things are going to happen:  1) when they come out the actual number will be absolutely nothing like what the market consensus predicted, and 2) the market will ignore them anyway because everything just comes down to the virus and what officials are planning to do to fight it.

So I’m going to try to keep it short, knowing that whatever I do is liable to get blasted out of the water anyway.

Nothing on the schedule during the European morning Wednesday.

We start with US housing starts & building permits, which are forecast to be exactly the same this month (I make them a little different so you can see both dots on the graph.) This would represent a big fall for both of them, but I don’t think anyone would complain – last month’s figures were the second-highest of the current business cycle for starts and the highest for permits. Builders apparently took advantage of the unseasonably warm weather and low interest rates to do some serious construction. I think we’ve seen the peak for these series for the time being though; the National Association of Home Builders (NAHB) index for March was down 2 points from February and off 4 points from its December high, indicating that many things are starting to slow. [...] Continue Reading on BDSwiss blog