Brexit has been a major factor driving Sterling’s performance against the US Dollar over the last quarter and will be a major feature in the months to come. The value of GBPUSD in average interbank rates has ranged from a low of 1.251 to a high of 1.334. The low came at the start of the year on 3rd January, as investors turned to the US Dollar and other ‘safe havens’ after poor economic data in China and Europe. The high was on 13th March, following Theresa May’s second Meaningful Vote defeat in the House of Commons. As we will explain, major issues are set to dominate GBPUSD fortunes over the next quarter.

Big, global trade focused issues have largely led the fortunes of the US Dollar over the last three months, including interest rates policy and the economy, US-China trade wars and the Mueller Report – and are set to do so again over the next quarter. Firstly, there was a surprise change in attitude by the Federal Reserve. After raising interest rates four times in 2018 and signalling more rises to come in 2019, it stated in late March that the Benchmark rate was likely to stay at the current range of 2.25%-2.5%. The Federal Reserve also said it would stop shrinking its bond portfolio in September, which should also help keep rates low. It says the labour market has remained strong, but growth of economic activity has slowed from its solid rate in the fourth quarter. Job gains are solid and the unemployment rate remains low. But household spending and business fixed investment are slowing.

Inflation has declined in the last year, due to lower energy prices. Inflation for items other than food and energy remains near 2%. The Federal Reserve says, “In light of global economic and financial developments and muted inflation pressures, the Committee will be patient as it determines what future adjustments to the target range for the federal funds rate may be appropriate to support these outcomes.”

Some analysts – and President Donald Trump – believe that if the US economy slows further, the next move could be an interest rate cut. In February, US retail sales fell 0.2% to add to soft data on manufacturing, housing starts and more. Building material sales fell 4.4% and food and beverage sales were down 1.2% - the biggest fall in a decade. Bad February weather played a part in the figures, but White House chief economic adviser, Larry Kudlow, has called for the Federal Reserve to cut interest rates by 0.5%. Finally, the Mueller Report was released, although at time of writing it has not been published. Arguments are continuing over whether part or all of the report into alleged Russia collusion in the 2016 Presidential election should be made public. After months of fevered speculation, Special Counsel Robert Mueller's final report recommended no new indictments.

US-China trade war settlement may be near

It is now a year since the US-China Trade War started and at last there are signs that a settlement may be near. Talks have resumed in Beijing and Washington with suggestions that progress has been made on technological transfer issues. US President Donald Trump says, “The trade deal is going very well. It is a very comprehensive, very detailed enlisting of problems that we’ve had with China over the years.” He adds, “And it’s going to have to be a great deal. If it’s not a great deal, we can’t do it.” Economic adviser Larry Kudlow says the talks are not time-dependent. “If it takes a few more weeks, or if it takes months, so be it. We have to get a great deal.”

China’s state news agency Xinhua says the two sides discussed “relevant agreement documents” and made progress. United States companies say China pressures them into handing over technological details in return for being allowed to do business in the country. China says any transactions are legitimate. Previously, the United States and China agreed to put any new action on hold for 90 days, until 1st March 2019, so they could talk further. In the event, they missed the deadline, but agreed to continue talking. President Trump had previously been planning to increase tariffs on $200 billion of Chinese goods from 10% to 25%. So far, the US has imposed trade duties on $250 billion of Chinese goods in retaliation for “unfair trade practices”. China added import duties on US products worth $110 billion.

Theresa May is now back in talks with Brussels to trey to extend Brexit. While Mrs May has said she would prefer a shorter extension to proceedings, the EU is talking about a longer wait. The latest in the Brexit saga comes after UK MPs rejected all Brexit options under consideration – making a no deal-Brexit “nearly inevitable”. This was the second batch of Indicative Votes set before the House of Commons on Monday 1st April. All four Indicative Vote options, designed to find which courses of action were most acceptable to MPs, were defeated in the House of Commons. The same happened the week before.

The Pound immediately dropped on the outcome, falling against the US Dollar from 1.311 to 1.304 in interbank rates. A week earlier, on 29th March, the day that Britain was supposed to be leaving the European Union, MPs ruled out Prime Minister Theresa May’s Brexit withdrawal agreement for the third time.

The emergency EU summit is taking place at the time of writing. If no extension is agreed with the European Commission, a ‘no-deal’ scenario under World Trade Organization (WTO) rules is the default option on 12th April. If there is more time, perhaps there is a hope of a suitable deal being reached? The chaos and confusion continues.

What next for GBPUSD?

Whatever happens with Brexit, the US and UK economy and the US-China trade wars are likely to affect the rate of this currency pair in the next three months.

Trend line support which has held since early December comes in around 1.3000/30 on the daily chart. A break below here would suggest that the uptrend is over and we could head back towards 1.2800. If 1.3000 holds that would be positive and establish the current levels as new chart support and buyers could target the 2019 high of 1.3380.

For now anything close to 1.3000 would be my initial target. Trend line support comes in around those levels and 1.3000 will add psychological support.  Currently the market is flat and lacking direction however it is primed for a break out of the current range. Near term resistance is just above 1.3100 and short term sellers should leave protection above there in case we see a run up towards 1.33 in the event of a break out. 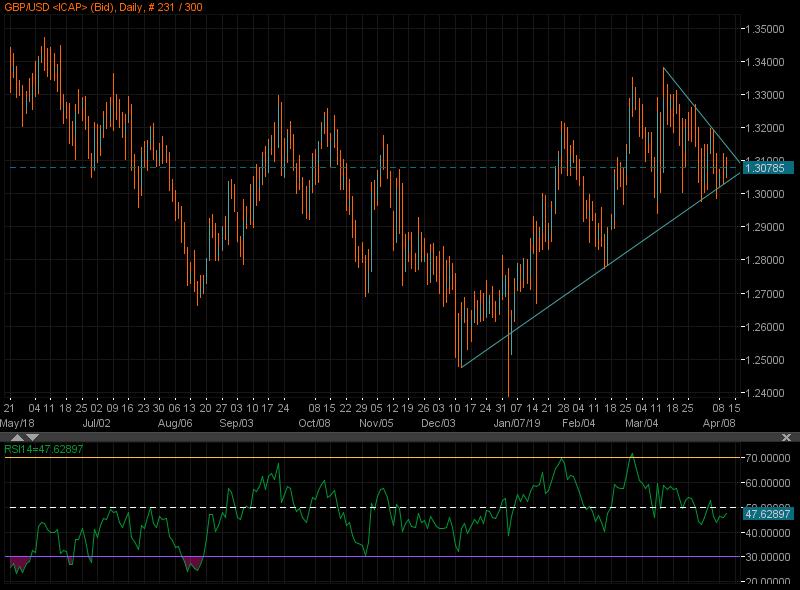