One more day of upside rejection in S&P 500, in what is now quite a long stretch of prices going mostly sideways. As unsteady as VIX seems at the moment, it doesn‘t flash danger of spiking in this data-light week, and neither does the put/call ratio. As I wrote yesterday about the selling pressure, these tight range days accompanied by 30-ish point corrections is as good as it gets when the Fed still has its foot on the accelerate pedal.

Yes, you can ignore the Kaplan trial baloon (have you checked when he gets to vote on the FOMC?) that spiked the dollar on Friday but didn‘t put all that a solid floor before long- dated Treasuries as seen in their intraday reversal.

Highlighting the key Treasury, inflation and reflation thoughts of yesterday, as these are still here to power stocks higher:

(…) the 10-year yield has been quite well behaved lately, closing at 1.65% only on Friday. The April calm seems to be over, and I‘m looking for the instrument to trade at 1.80% at least at the onset of summer. Then, let‘s see how the September price increases telegraphed by Procter & Gamble influence the offtake – will the price leader be followed by its competitors? That‘s one of the key pieces of the inflation stickiness puzzle – and I think others will follow, and P&G sales and profitability won‘t suffer. The company is on par with Coca Cola when it comes to dividends really.

Once there, we would progress further in the reflation cycle when inflation is no longer benign and anchored. We‘re though still quite a way from when the Fed tries to sell rising rates as proof of strengthening economic recovery – once the bond market would get to doubt this story though, it would be game over for its recent tame behavior.

Gold market enjoyed its fireworks, aided mightily by the silver squeeze run. The inflation theme is getting rightfully increasing attention, and commodities are on the run across the board. Just check yesterday‘s oil analysis or the bullish copper calls of mine. I could just as easily say that copper is the new gold – it has been certainly acting as one over the past many months, yet the yellow metal‘s time in the limelight is about here now. And don‘t forget about silver bring you the best of two worlds – the monetary and industrial applications ones.

When it comes to USD/JPY support for the unfolding precious metals upswing, we indeed got the reversal of Friday‘s USD upside:

(…) The taper story being revealed for a trial baloon that it is, would quickly reverse Friday‘s sharp USDX gains, where particularly the USDJPY segment is worth watching. 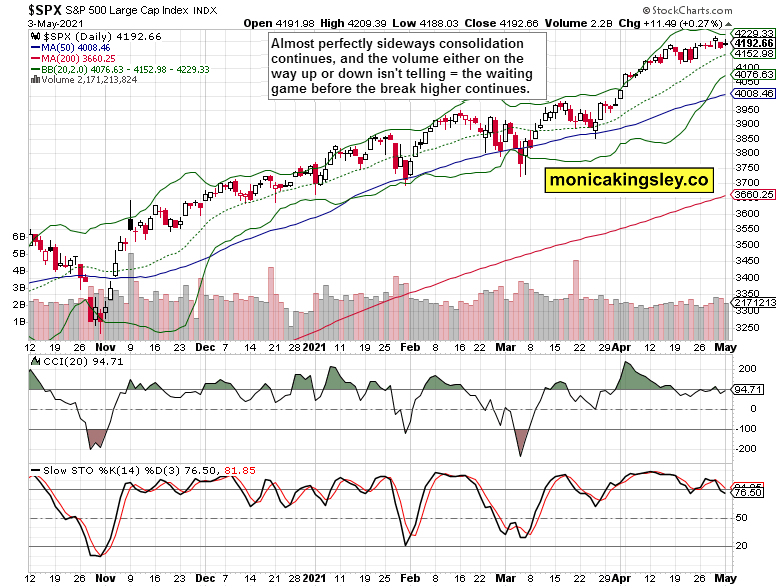 The declining volume tells a story of not enough conviction to go higher or lower – the market remains vulnerable to brief spikes either way such as those seen and covered in both today‘s intraday Stock Trading Signals.

As inconclusive intraday the corporate credit markets may seem, the pressure to go up is there, regardless of the high yield corporate bonds reversal. Long-dated Treasuries aren‘t standing in the way but it must be noted that these have given up their intraday upswing completely, and opened with no bullish gap.

Technology lost the advantage of higher open, and wasn‘t helped by the poor daily $NYFANG performance. At the same time, value stocks continued higher but gave away a portion of intraday gains. The markets are on edge, and a bigger move this or more likely next week, shouldn‘t come as a surprise.

Volume returned into the gold market, and so did miners‘ outperformance. While these didn‘t close anywhere near their mid-Apr highs unlike gold, they had extremely undeperformed on Friday – what happens over the next few sessions would provide clue as to whether strength genuinely returned yesterday.

The copper to 10-year Treasury yield is edging higher again, and the miners to gold ratio strongly rebounded, proving my yesterday‘s point that the real parallels are the 2018 and 2019 gyrations, not the uniquely deflationary corona crash.

The S&P 500 remains vulnerable to short-term spikes in both directions, but the medium- term picture remains positive – the strong gains since late Mar are being worked off here before another upswing.

Gold and miners proved themselves yesterday, and scored strong gains in a universally supportive array of signals across commodities, Treasuries, and also the USD/JPY daily move. Well worth not retiring the benefit of the doubt given to the precious metals bulls – more gains are in sight.