In Spain, like in most Western countries, the 2008 crisis caused an unprecedented drop in industrial employment, the pain of which continues to be felt. In fact, there are almost 500,000 fewer manufacturing jobs than in 2008. Some of this decline, however, reflects an increasingly important shift from industrial firms to service offerings, which is not a bad thing. With the Covid-19 crisis and the EUR 69.5 billion Recovery and Resilience Plan (RRP), which will be rolled out over the next five years, strengthening industry in Spain has once again become an important area of focus for the authorities. A quarter of the RRP will therefore be dedicated to this objective. Spain currently enjoys comparative advantages in growth sectors such as the automotive sector and renewable energies, especially. Obstacles (low level of investment, shortage of skilled labour) remain significant, however, and will take time to resolve. In the long term, strengthening and modernising Spanish industry are two key levers to achieve the long-term goals set out in the España 2050 plan, which, among other things, foresees a significant increase in labour productivity and R&D by 2030, and still more by 2050.

What is the current situation?

The successive crises of 2008 and 2011 have left their mark on industry.

Industry’s share (excluding construction) of total value added fell below the 15% threshold in 2019 (14.7%). At this level, Spain finds itself in the last third in Europe, around three points below the European average (see Chart 1). Despite a slight recovery in recent years, almost 480,000 industrial jobs – one in seven in the sector – have disappeared since the subprime mortgage crisis began in 2008. Over the last 12 years, of all European countries, Spain is second only to Greece in terms of the biggest contraction in industrial employment (see Chart 2). 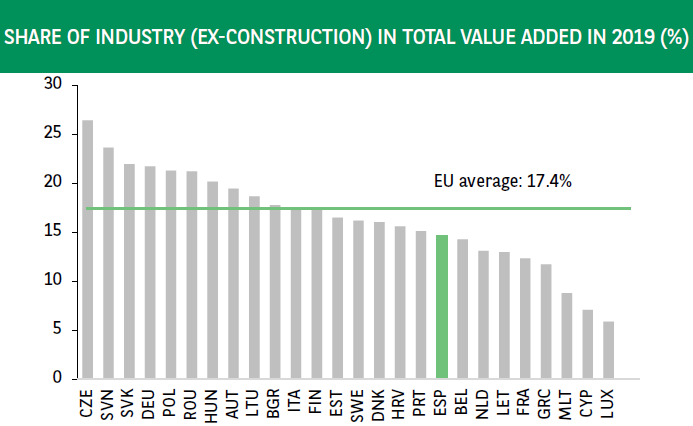 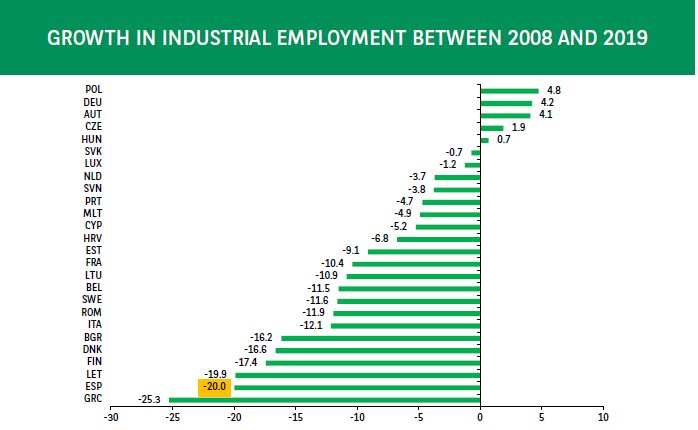 The two successive crises – of subprime mortgages followed by eurozone sovereign debt – left deep marks in the domestic industry. It suffered mainly due to the plunge in domestic demand (private consumption and investment), which was heavily impacted by the crisis itself, but also by the austerity policies that followed under Mariano Rajoy’s government. Between 2007 and 2013, industrial production fell by almost 30% (see Chart 3), which represents both the sharpest post-war decline for the country and one of the largest contractions in developed countries. Industrial production in Spain remains more than 20% below its historic level reached in summer 2007. Manufacturing employment fell by a similar extent in the period 2007-2013 (-29.2% or -877,436 jobs). This crisis was therefore damaging both in terms of its size and its duration, as Spain experienced four years of economic recession over the five years between 2009 and 2013. 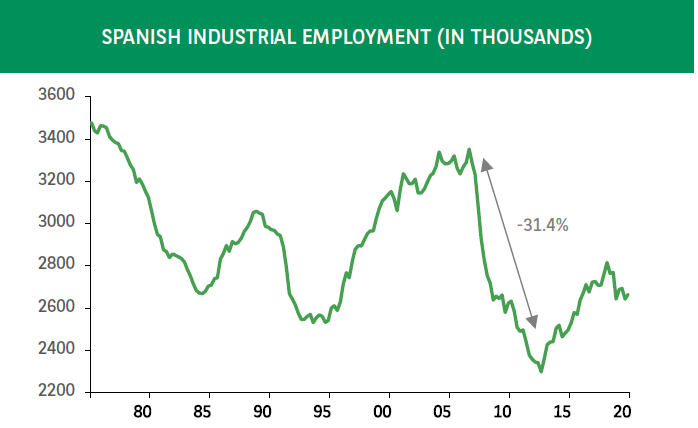 However, the manufacturing sector’s share of value added remained relatively stable for almost 10 years, before recovering in 2020 with the coronavirus crisis, which caused a much greater drop in service activity (see Chart 4). Nevertheless, the share of industrial employment has steadily declined and reached a new historic low in 2021. Since then, new jobs have been created in services, but they have not been able to offset the destruction of jobs in industry: at the end of 2019, total employment in the country remained more than 3% below the 2008 level. 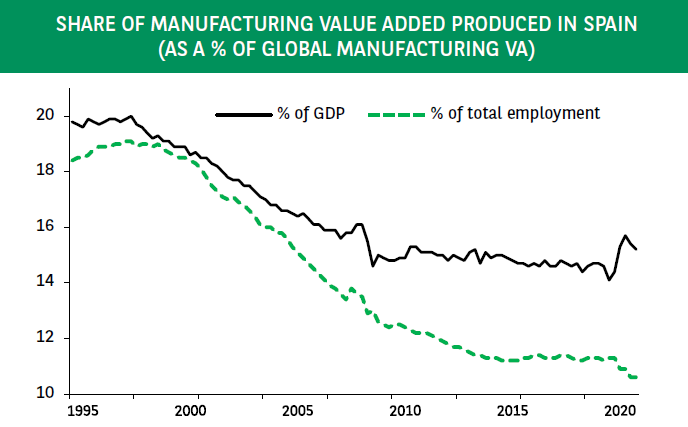 The downturn has affected all regions of the country. Catalonia, the largest industrial region, has seen manufacturing employment shrink by almost 150,000 jobs since 2008 (see Table 1). Significant declines have also occurred in Madrid, Valencia and the Basque Country. Some regions have managed to maintain a relatively stable industrial base, with more contained job losses: this is the case for Navarra and Rioja, where almost a quarter of jobs still remain in industry, mainly in the automotive and agribusiness sectors.