Very little happened in the precious metals market both yesterday and in today’s pre-market trading – at least so far. We will take this opportunity to discuss something that we haven’t done in a while – silver stocks. To be clear, we’re not going to discuss the silver mining stock selection, as that’s something our proprietary algorithms do on a daily basis. And yes, during the recent long trade, the gain on the individual gold and silver miners was bigger than the one from the GDX ETF.

Instead, we’re going to take a look at this sector’s performance and compare it to one very similar case from the past. Yes, just one, which may not looks like an appropriate base for drawing conclusions, but the level of similarity makes it definitely relevant to the current situation. So, without further ado, let’s take a closer look at the SIL ETF – the proxy for silver miners.

Silver Miners in the Spotlight 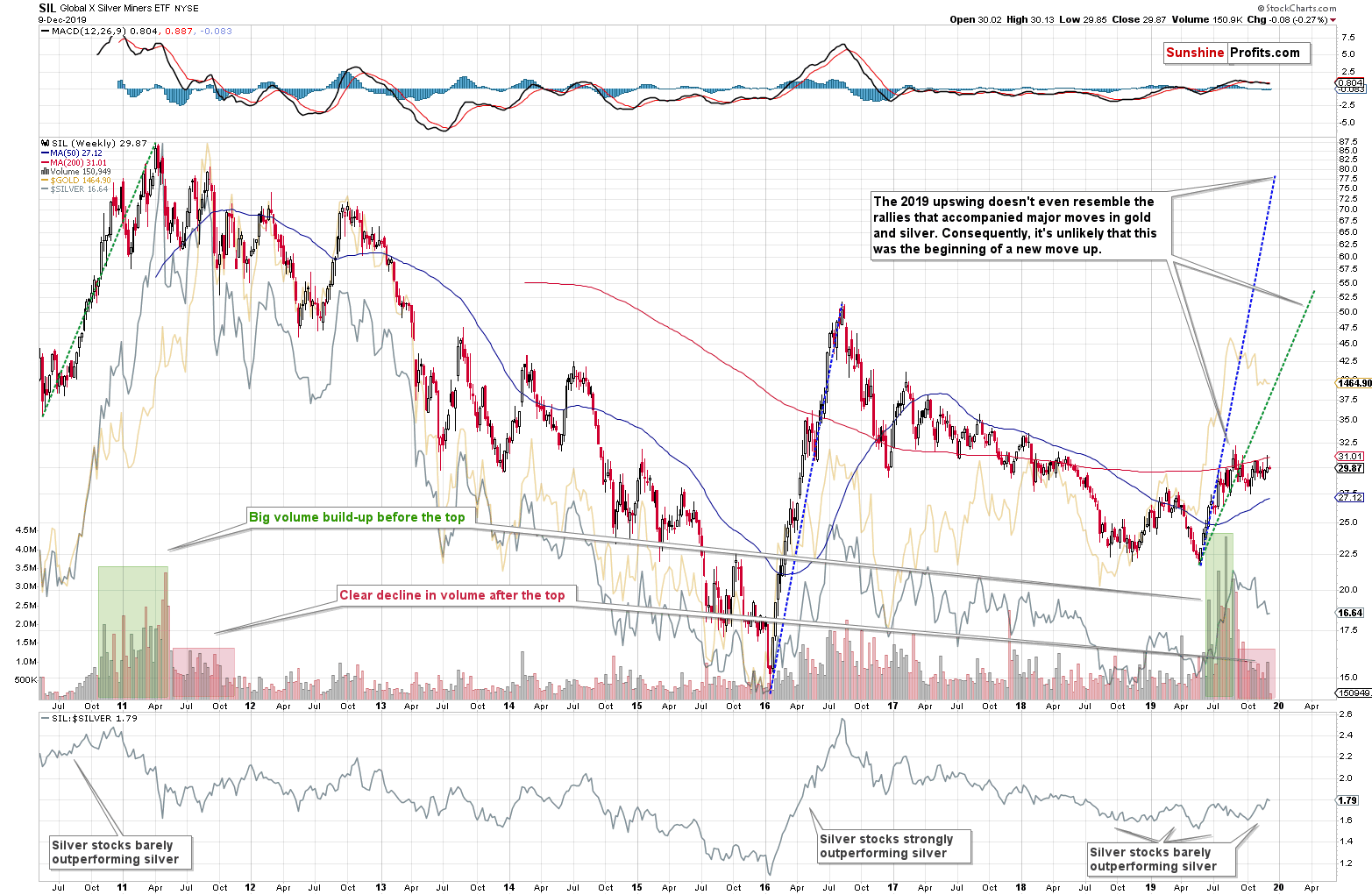 Ever since the SIL ETF started trading (in 2010), we saw three significant rallies in gold and silver. The first rally took place right at the beginning of this chart, leading to the 2011 tops. The second rally started in early 2016 and it was significant in case of both metals. The third notable rally started in the second half of 2018 and it ended in August 2019. It was much bigger in the case of gold than it was in silver and mining stocks, but it’s clear that overall it was something major.

The first takeaway from the above chart is based on the sizes of these three moves. The most recent upswing in the silver stocks was tiny. Even though gold and silver moved higher in a visible manner, silver miners are barely up. To be clear, the rally is visible, but it’s orders of magnitude smaller than what we saw in 2016. We copied the sizes of the previous rallies to the current situation (blue and green dashed lines). It’s clear how tiny the recent upswing was compared to them.

The mining stocks are the part of the precious metals market that tends to show strength at the beginning of a major move up. We saw exactly the opposite. Silver miners were weak compared to what the underlying metal did. Consequently, the odds are that what we saw last and this year was not the start of a long-term bull market in the precious metals market. We will most likely get there eventually, but we are not there just yet.

The thing that we just discovered is that we see not only the similarity in terms of prices, but also in terms of volume movement. The recent move higher was not very similar to the previous upswings in terms of price, but the way volume increased and then declined is very similar to what happened during previous big rallies in gold and silver. In particular, it’s reminiscent of what we saw in 2010 and 2011. Because of both the shape of volume, and of the way silver stocks outperformed silver (barely). The latter is what differentiates the recent upswing and what we saw in 2016 – back then, silver miners strongly outperformed silver.

The final parts of the rallies were accompanied by huge volume levels, but once the top was in, the volume levels notably decreased. That’s what happened in mid-2011 and that’s what happened recently. We marked it with red rectangles. Within the 2011 red rectangle, we saw a few separate volume spikes, and something similar accompanied the recent action too. Back in 2011, the volume spiked during the topping process. It marked the final top in gold, the second top in silver, and also the second top in the silver miners.

Higher gold prices were never seen since that time.

Higher silver prices were never seen since that time.

Neither higher silver stock prices were ever seen since that time.

The silver stock volume spiked last week in a way that was very similar to what we saw in mid-2011. Moreover, last week’s session was a clear shooting star reversal candlestick. These candlesticks are powerful bearish signals if they are accompanied by big volume. And that’s exactly what we saw. When we exited our long positions and entered short ones close to last week’s high, the outlook was already bearish, but seeing this kind of powerful confirmation of the reversal in silver stocks makes this change even more justified.

All in all, the recent performance of silver stocks serves as a perfect confirmation of what we previously wrote about gold, silver, and gold miners. Namely, the short-, and medium-term outlook for the precious metals sector remains bearish.

Our profitable long precious metals position has been closed last week, and we’ve entered another trade immediately. This time, on the short side of the market, and it’s going profitable again. The full version of this analysis features all the details and targets of the already-profitable short, digging into the factors supporting this move and the bearish outlook. Join us and profit along!

Gold: Downside appears more compelling in the NFP week ahead

Gold (XAU/USD) shed about 4.5% in the past week, delivering a weekly closing below the August month low of $1863. The yellow metal booked the first weekly loss in three, with the risks skewed to the downside in the US Non-Farm Payrolls (NFP) week ahead.