The risk recovery is taking a pause for breath this morning as the bull run on equities begins to show signs of easing. It comes as Treasury yields have pulled a shade lower, the US dollar has found a degree of support across major currencies, and equity futures are tailing off. In recent days there have been some mixed reports over how US and China relations could be developing. After a claim by Reuters that China could pull back on its US imports was officially denied, there are still suggestions that this may be the case. The official denial a couple of days ago had previously fanned the flames of the risk rally. Could this now begin to douse those flames with cold water? The consolidation comes ahead of what could be another momentous European Central Bank monetary policy decision. No change on rates is expected, but the ECB is likely to add to its Pandemic Emergency Purchase Programme (PEPP). PEPP purchases have been running at around €5bn of assets per day. It means that the  €750bn fund size will be exhausted by around August/September. The expectation is that the ECB has seen the PEPP as a successful operation and in order to get ahead of its exhaustion, will increase the program by around €500bn today, enabling the purchases can run into Q2 next year. This would be ongoing supportive for the euro as it reduces the risk premia for the single currency of the Eurozone. In the near term there has been a consensus build up for this move and could mean some “buy on rumour, sell on fact” profit taking. However we would still see near term euro weakness as a chance to buy. 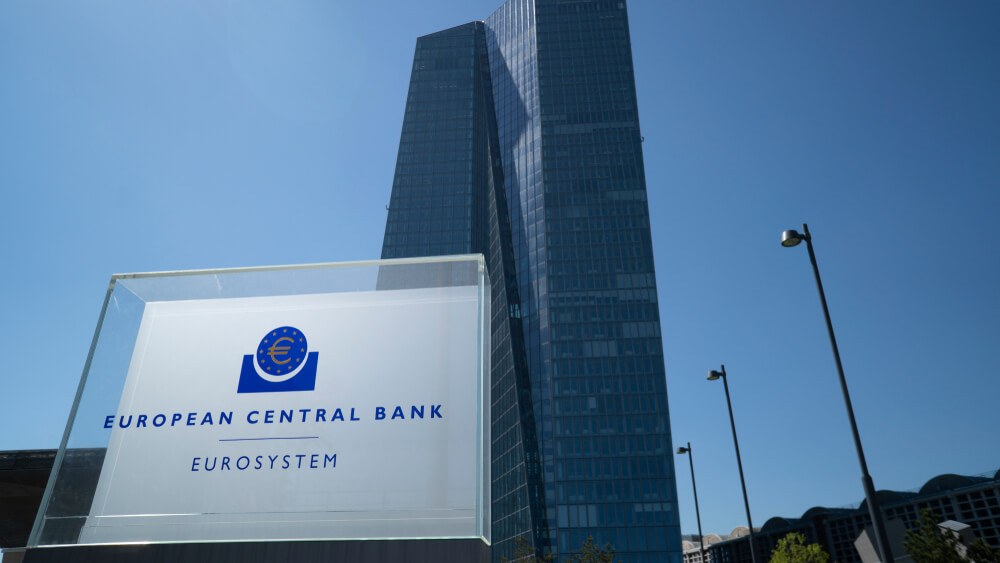 Wall Street closed another strong and positive session with decisive gains, as the S&P 500 was +1.4% at 3122. However, US futures are a shade lower today with the E-mini S&Ps at -0.3% and some of the momentum of the rally is being lost near term. This is reflected in Asian markets mixed to only slightly positive (Nikkei +0.4%, Shanghai Composite flat). European markets are similar to the lead from the US, with FTSE futures -0.4% and DAX futures -0.3%. In forex, there is a dollar rebound underway, where USD is outperforming across the major pairs. The main underperformers are GBP (on elevated fears of a no deal outcome from EU trade negotiations) and AUD. In commodities, we see gold has built a degree of support after yesterday’s sell-off, whilst silver is yet to amidst the near term risk reversal. Oil is also around -1% to -2% lower in early moves.

The economic calendar is dominated by the ECB monetary policy today. However, UK trader may also keep an interested eye on the UK Construction PMI at 0930BST. Consensus expects a bounce back to 29.2 in May from an incredible 8.2 in April, although this is still deep in contraction territory. The ECB monetary policy decision will be at 1245BST where there is no expectation of any changes to rates (main refinancing rate of 0.0% and the deposit rate of -0.50%). However, the main announcement is expected to be an extension to the Pandemic Emergency Purchase Programme (PEPP) by around €500bn. The ECB Press Conference with Christine Lagarde at 1330BST will also be worth watching. The US Weekly Jobless Claims are at 1330BST and are expected to show the continued reduction in claims, to 1.800m (from 2.123m last week). The US Trade Balance is at 1330BST and is expected to show an increase in the deficit to -$49.0bn in April (from -$44.4bn in March).

This is an important moment for the silver rally. The latest breakout above resistance at $17.62 has spent the past two sessions correcting back and is currently trading around a key confluence of support. The question is whether this is a pullback into breakout support, or the start of a deeper move (the hybrid safe haven status has acted as a drag as risk appetite has soared). The move has unwound back to the support of a four week uptrend (c. $17.50 today), and the breakout support (at $17.62). If support can begin to build, it would be a good opportunity to buy for the likely continued recovery. Despite an initial tick lower, momentum indicators remain positively configured on a medium term basis. The RSI has unwound to 60, MACD lines are still strong and Stochastics above 80. However, this could change if silver continues to slide and we could begin to see some corrective signals. For now, we expect this slip lower will be short-lived and that the market will begin to build support once more before continuing higher. Even if the uptrend is breached, the bulls will certainly be looking to hold a corrective move above the 76.4% Fibonacci retracement of the big sell-off from $18.94/$11.62 (at $17.20). Holding the uptrend on a closing basis will be an encouraging sign now. Hourly RSI and MACD lines have unwound and are beginning to look more stable this morning. Initial resistance is $17.75/$18.00 needs to be overcome to re-engage the bull move. A move back above resistance is now the $18.36 resistance would see the recovery back in full swing for a full retracement to $18.94 (which is still preferred) in due course. The bulls would though lose control on a breach of $16.65 key higher low. 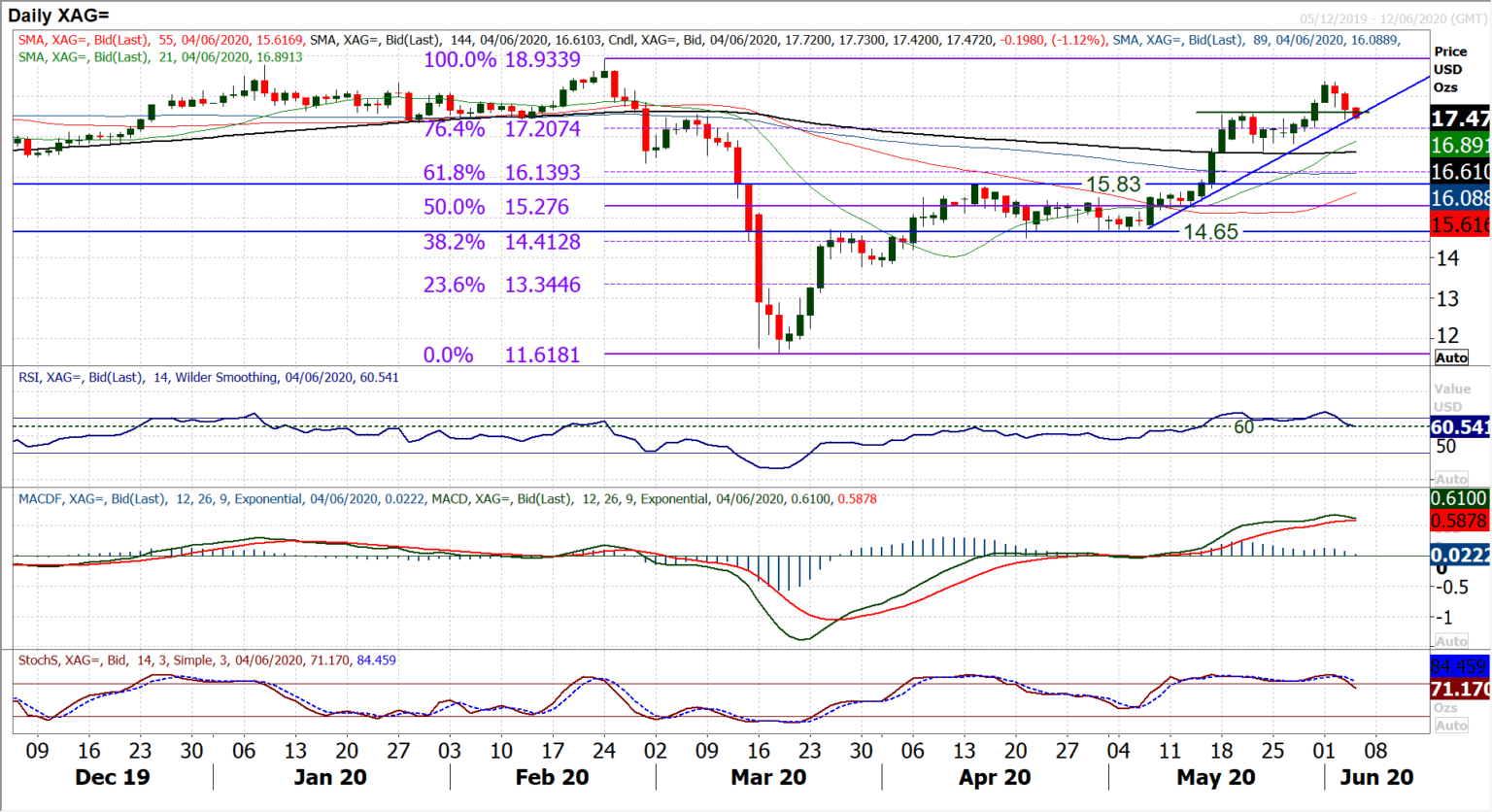 The bull move higher has just shown some signs of near term stalling in the past 24 hour or so. A close higher last night came with a doji candlestick on the daily chart (denoting uncertainty with the current trend higher). The early slip back this morning will add to concern for a near term bout of profit taking. The hourly chart shows $38.65 as near term support this morning and a breach effectively completes a mini top pattern that would imply an unwind towards $36.75. Mild negative divergences on hourly momentum signals also imply a loss of impetus. Consolidations in recent weeks on Brent Crude have tended to set in as the bulls just pause for breath. The six week uptrend comes in around $36.40 today and the key breakout support is also $36.40/$37.00. With daily RSI just stuttering around 70 an unwind would also help to renew upside potential for the continued recovery. Above yesterday’s high of around $40.50 means the market is on course to continue towards filling the gap at $45.20. 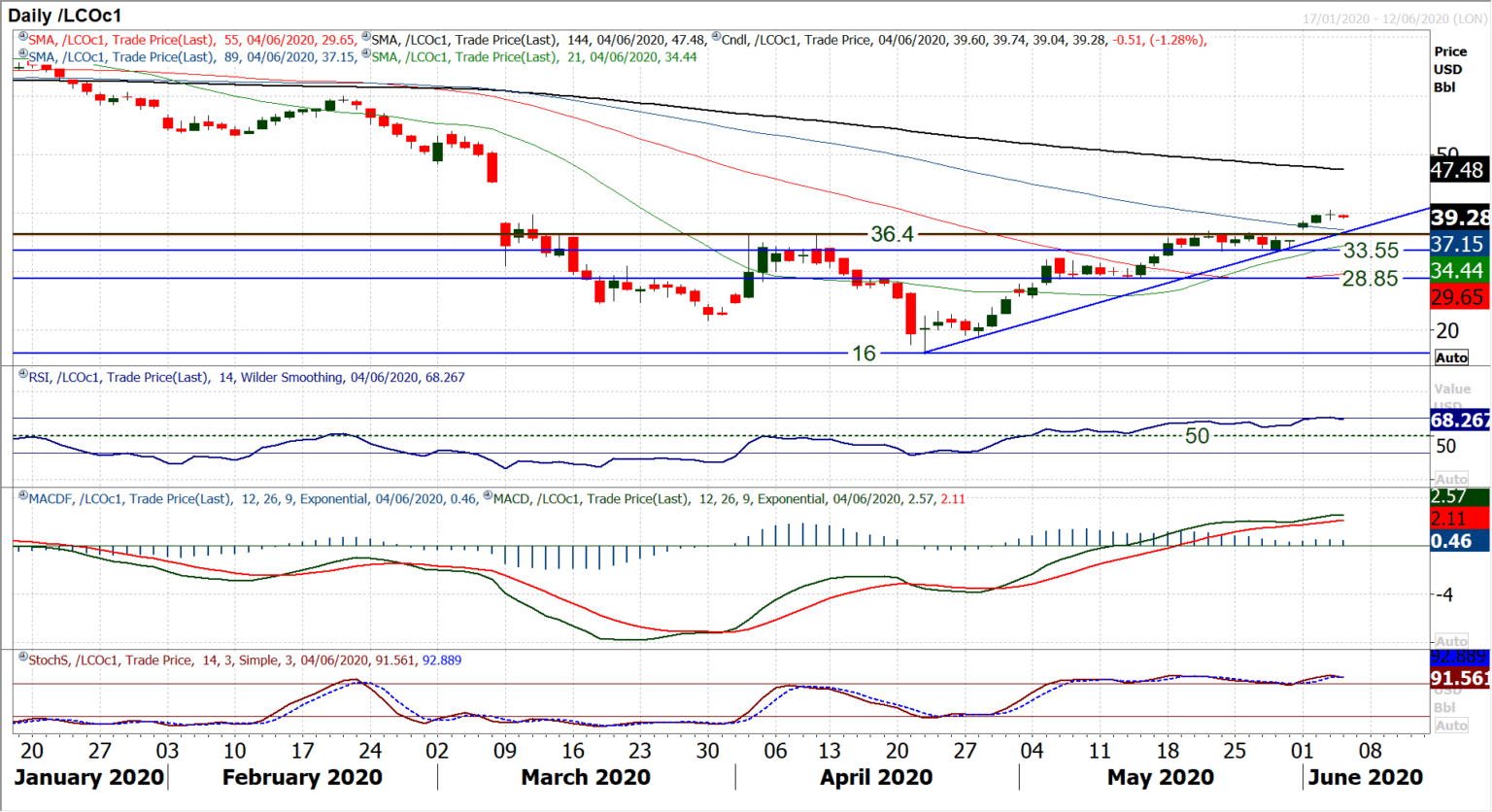 The equities recovery continued to soar yesterday as another gap higher and strong positive candlestick showed the intent to reclaim losses from the COVID-19 driven sell-off. The move in the past couple of weeks has formed a strong uptrend now which comes in at 25,680 and flanks the rally. An upside target of 26,750 can be derived from the previous breakout above 24,765 and the market is well on its way towards achieving it. The next real resistance is not until 27,100. Momentum indicators are very strong with RSI into the high 60s now, whilst MACD and Stochastics also rise in a strength of configuration not seen for months. We look to buy into weakness and with the US futures edging back lower this morning, there may be another opportunity to present itself. The breakout above 25,760 is a basis of initial support now, and then 25,030. 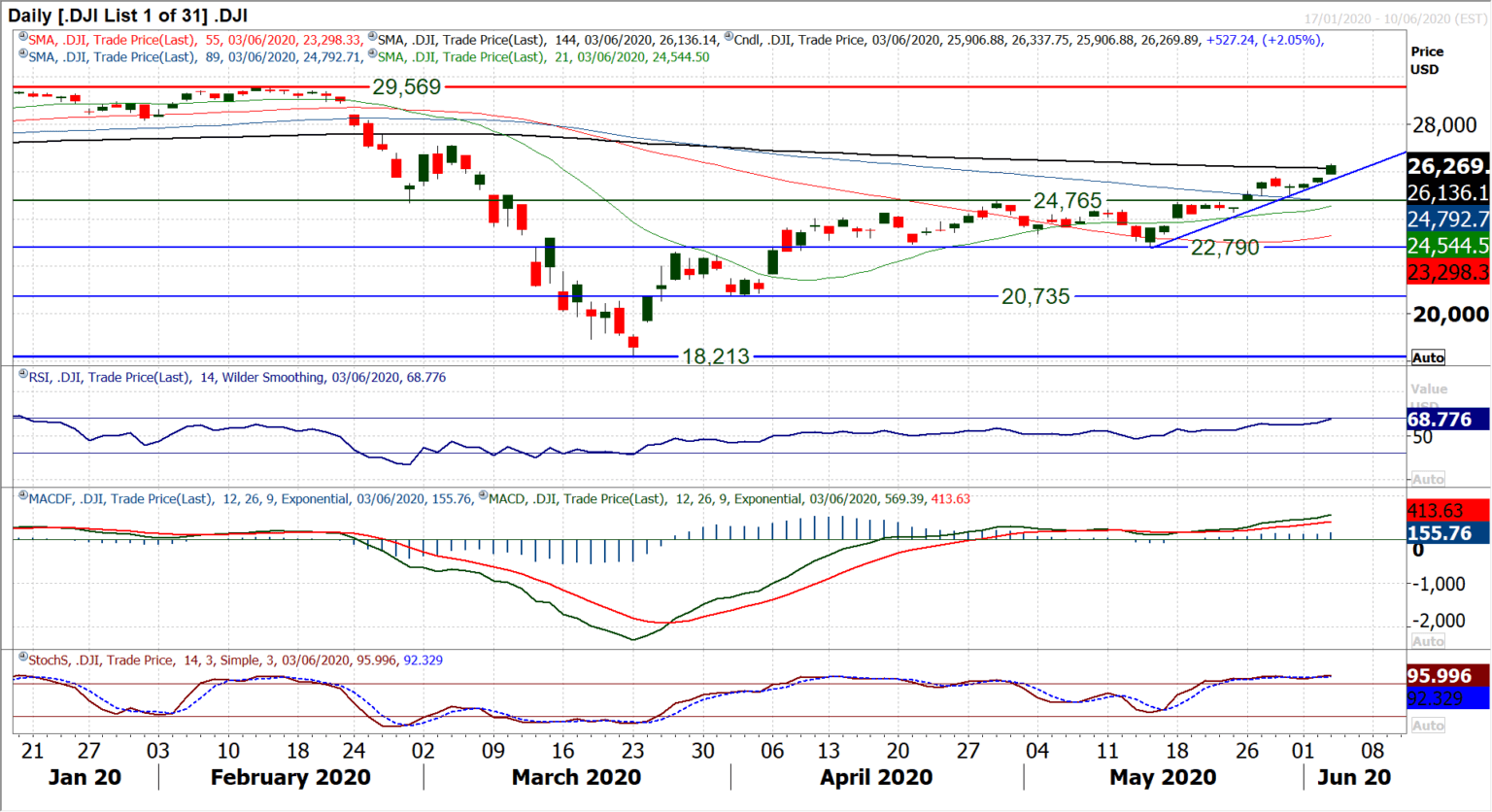