The RBA’s meeting is in focus ahead of Asia Session. No change is anticipated  to the 0.25% rate setting. The Bank has expressed its commitment to ease credit conditions, seeking to support the economy as it recovers from the lockdown.

In July’s minutes the bank said that negative rates are “extraordinarily unlikely” and that there is no case for intervention in the foreign exchange market, given its limited effectiveness when the exchange rate is broadly aligned with its fundamental determinants. At the same time RBA members “reaffirmed the importance of the longstanding principle of separating monetary policy from the financing of government”. Separately RBA’s Lowe also repeated in a speech that the AUD is broadly in line with fundamentals, which mirrored the sentiment of the minutes. Lowe also said he welcomes the government’s plan to extend income support – albeit at reduced and tiered rates.

Therefore, further stimulative measures remain possible, such as a rate cut to 0.10% or perhaps the adoption of QE to reduce long term rates. The Q2 CPI report showed a -1.9% contraction in the quarterly comparable measure while CPI fell -0.3% y/y in Q2 versus the 2.2% gain in Q1. While this is likely temporary given the rebound in energy prices, the outright contraction in CPI is sure to warrant a mention in the policy announcement this week.

Meanwhile a key theme of tomorrow’s statement is also the response of the RBA to the latest Covid-19 developments after the tightened restrictions in Victoria state as the state faces a second wave with heightened lockdown risks also in New South Wales and Queensland (which are seeing a rise in new infected cases). The 2nd pandemic wave in Australia poised markets to consider an even slower future recovery for Australia’s economy.  Hence the RBA’s statement will remain in the spotlight despite the fact that a modification of the current policy is unlikely.

The RBA publishes its Statement on Monetary Policy this Friday. The June trade balance (Tuesday), June retail sales (Tuesday) and June housing investment (Wednesday) reports are also due this week. 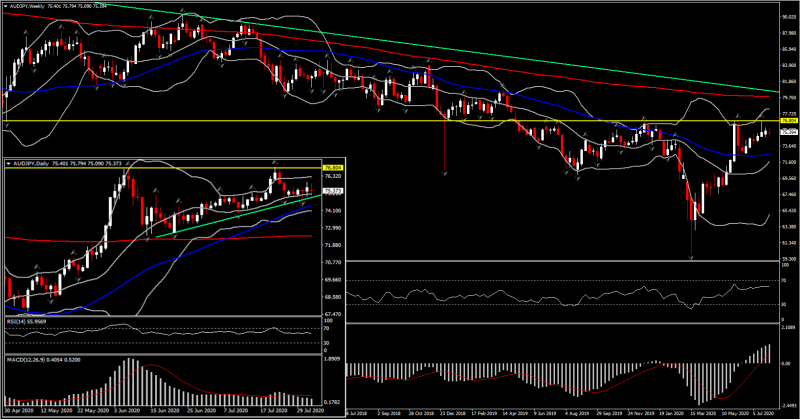 The Australian Dollar has been the outperformer du jour in the past 4 months as the currency received an upward boost concomitantly with stock markets and high-beta commodity currencies driven mainly by the risk-on conditions and USD underperformance.

Hence for this week’s meeting, it will be focal to see whether the bank will touch again on the consistency of the Australian Dollar with commodity prices and interest differentials. Such comments from officials could further intensify the brightness of the green light shining in the faces of Aussie dollar bulls.