US rates have snapped lower. It had been brewing. Over a half a trillion was returned to the Fed at 0% yesterday, as excess liquidity seeks a home for the night. The bond market sees this as a run on rates, and not a driver of a macro boom. To be seen. Meanwhile, the ECB has removed a key risk to summer carry trades, once boring trades that suddenly have some dynamism.

US rates test the downside as over USD 0.5trn cash gets pushed back to the Federal Reserve

Our latest view on why US rates are testing lower is contained here, where we mischievously argue that the bond market is wearing goggles that block out all inflation concern. Those goggles have worked very effectively post the 5% US inflation print. It’s just a number is seems. At 5% its exceptionally deviant from the US 10yr, as it gapped below 1.5% yesterday.

If you are sitting in Tokyo or Frankfurt you don’t care as that’s not your inflation rate. You only care if inflation causes market rates to spike. If not, happy days. These players are contented buyers of US interest rate product, especially as synthetically creating dollars is not what it was pre the pandemic when a wider rate differential could generate cheap dollars on a forward basis.

If you are sitting in the US, fixed income is a big negative real return play, at least in term of running yield. But if you are a corporate and you see rates doing “nothing”, the temptation is there to receive it, cut funding costs and walk away with big positive carry, in the knowledge that the Fed is promising no movement on the funds rate for the foreseeable future.

US rates are high when looked at from London or Frankfurt

Excess liquidity is an additional contributory factor. Almost $530bn was thrown back to the Fed yesterday at 0% on the reverse repo window. Much of that excess that does not go back to the Fed shows up on the buy side in fixed income. Even front end longs can crowd out up the curve.

So yes, the CPI reading is just a number. Some point it should register that it is more than that. Fixed income should be running scared of it. But for now it is clear that the dominant mood is to price consequences of an overflow of liquidity as an excess demand factor for interest rate product, rather than as something that could prime the economy for a boom and an inflation problem.

Boring carry trades are turning into dynamic money makers in this environment.

And therein lies a concern that perhaps, just perhaps, the bond has uncovered something that the coincident macro numbers are missing; that it could all fade away... We're not fully invested in this view just yet, but we're watching it. The excess in liquidity and a frenetic demand for US rates is a more likely immediate driver. Either way, boring carry trades (borrowing cheaply to buy higher-yielding longer tenor rates) are turning into dynamic money makers in this environment.

Remember also that lending cash to the Fed at zero to borrow bonds is effectively a carry trade through the back door, and it is one that can become self-perpetuating. The better it works, the more players that come in to do something similar, and on it goes.

ECB staying on the front foot

President Christine Lagarde can probably congratulate herself on a successful meeting yesterday. The central bank managed to walk the tightrope between giving voice to economic optimism, and keeping exceptionally generous monetary policy measures in place. That financial markets shrugged off the improving economic outlook is testament to the faith put in the ECB’s promise to prevent a tightening of financing conditions.

We agree, up to a point. This meeting, more than the previous ones, shows to what lengths the ECB is willing to go to ensure the recovery proceeds smoothly. This is a boom for financial markets. Not only does the later withdrawal of accommodative measures keep borrowing costs low for the economy, but it also dampens financial market volatility and boosts investors’ risk appetite. The debate will no doubt resurface in the run-up to the September meeting but, in the meantime, markets can look forward to a quiet summer.

The ECB also managed to signal that purchases will in all likelihood diminish in the summer months to account for lower market liquidity. It goes without saying, but we had concerns such details would muddy the picture. Subsequent leaks to Bloomberg show that summer liquidity conditions were subject to debate but Lagarde did a good job at flagging the possibility. They didn’t. Under the current €1.85tn envelope, the ECB also has the ability to continue purchases at roughly the current pace until the announced end in March 2022. It remains to be seen whether it judges it necessary to taper purchases earlier than that, but we suspect hawks will not easily be placated.

Green light for carry trades, but core rates can rise

The promise of another quarter of ECB purchases will no doubt boost investors’ appetite for carry trades. As those typically perform best in calm markets, the volatility-dampening impact of yesterday’s decision is the most momentous. This doesn’t mean it will prevent rate rises altogether, however. After all, economic and financial optimism should decrease demand for safe haven assets such as high rates government bonds.

A stronger focus on carry trades should also be detrimental to the segments of the fixed income market offering less of it. On core EUR curves, the 30Y sector is at a disadvantage here and we should see further steepening of EUR 10s30s as a result. The same logic holds true for cross-country spreads. We expect bonds offering the greatest yield to be in greater demand. This dynamics seems to be well accepted already judging from the nearly 20bp tightening in Italy-Germany spreads since their peak in May. 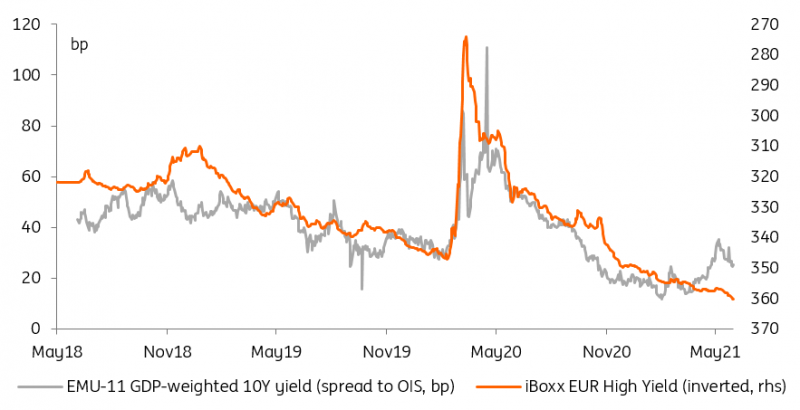 The last unanswered question is about the degree of ECB tightening priced in the belly of the yield curve. The ECB noticeably raised its inflation and growth forecasts yesterday, making a stronger case for the eventual end of QE programmes and for rates hikes. While growth and headline inflation for 2023 were left untouched, the ECB upgraded its profile for core inflation, a key metric in its forward guidance. We’re not sure this will prove enough to validate hike expectations, as the ECB has shown today a strong preference for erring on the side of caution.

Read the original analysis: Rates spark: The boom in rates questions the macro one

EUR/USD defies bulls and trades around the 1.2000 figure after Fed Chair Powell explained the bank's upbeat projections. The Fed's dot-plot points to two rate hikes in 2023, contrary to none in the March decision.

XAU/USD next critical support only at $1,822 after the Fed

Rate hikes are coming – perhaps only in 2023, but that is ahead of the Federal Reserve's previous projections of hiking borrowing costs only in 2024.

BTC jumped 33% before reversing near the explicit resistance from $41,581-$44,023. ETH nears the lower trend line of a multi-week symmetrical triangle continuation pattern. 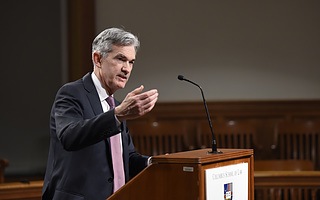 As widely expected, the FOMC made no substantive policy changes at today's meeting. The Committee maintained its target range for the fed funds rate between 0.00% and 0.25%, and it kept its monthly pace of asset purchases unchanged.