Metal price developments have been a mixed bag over the past months, driven by a weakening final demand outlook, but supported by various supply side issues. The demand boost from China’s pandemic-era stimulus is now over, and the focus on deleveraging and the ongoing construction sector worries add to the weakening outlook. This is already visible in iron ore prices, which have plummeted from early summer highs. China consumes 70% of iron ore globally, and over 60% of the steel produced from the said iron is consumed in the construction sector.

Rising energy prices have an impact on metal prices, however, as the price of coal used in metal production has risen in line with broader gas and electricity prices (Chart 1). Coal is still the primary energy source in China, with 57% share of the total energy production (Chart 2). Higher electricity prices and recent power rationing directly affect Electric Arc Furnace production (EAF), which utilizes scrap material and electricity for steel production and accounts for around 15% of Chinese steel production. Despite this, traditional blast furnace production from coal and iron ore has also seen costs increasing, as prices of metallurgical coal have risen in line with thermal coal. 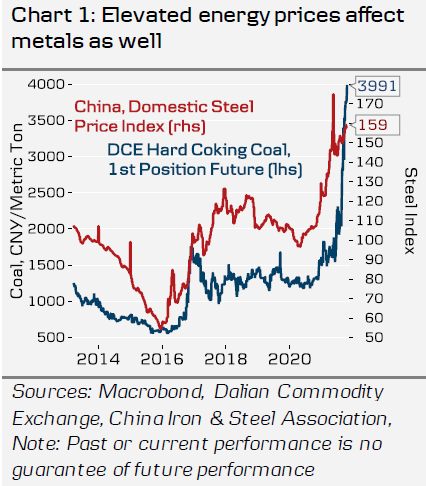 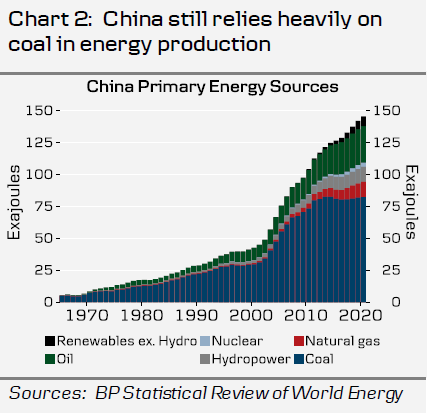 High coal price levels help to explain the divergence between iron ore and steel prices over the past months, and the effect can be seen across other refined metals as well, such as copper and aluminium. China’s trade spat with Australia continues to make the situation even more challenging, as China has not imported any Australian coal since last December despite the price surge. Australia has been able to divert majority of the Chinese exports to other trading partners, namely India, South Korea and Japan, (Chart 3) and as such, no quick supply boost is available for China even if the dispute would suddenly be resolved. Australia accounts for around 50% of the world’s metallurgical coal exports. 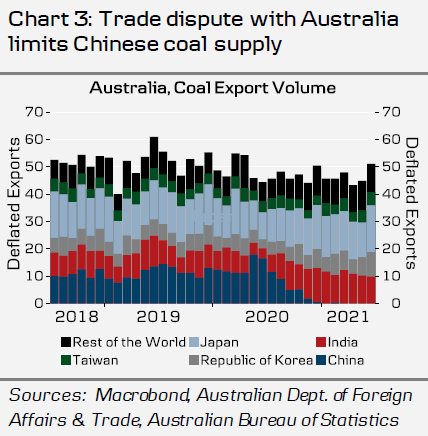 Another factor supporting prices of Chinese manufactured metals have been the environmental restrictions, which have limited the highly polluting metal production. As a result, we have seen steel production declining since March 2021 despite the recovering demand globally (Chart 4). 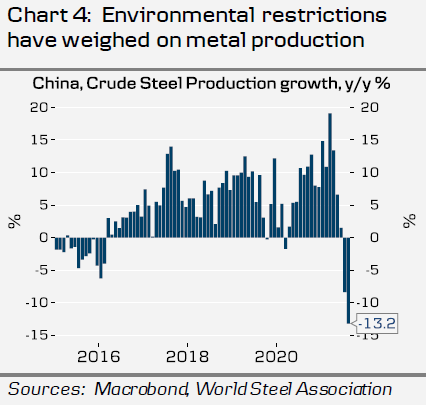 China to remain under pressure in the short term

Looking ahead we see clear downside risks for Chinese construction. The developer crisis has severely squeezed financing channels for the big majority of developers and focus will be on deleveraging and securing liquidity and less on starting new projects that require more debt. Home sales have also declined adding to develop er’s liquidity challenges and reducing the need for new construction. We do not expect a severe financial crisis as the government is likely to step in before that happens. For now, they have been quite passive with no sign of bailing out the ailing developer sector. But, we expect authorities to step in soon to underpin home sales and increase lending from big state banks in order to avoid a financial stress from spinning out of control. Infrastructure spending will likely also see a small lift as this is the main tool, the government can use to avoid a big drop in overall demand. But generally, we look for Chinese growth to be very weak in Q3 and Q4 before gradually turning higher during 2022, see also China Macro Monitor – Growth revised lower as property crisis to linger into 2022, 5 October 2021. The bottom line is that Chinese demand for metals should be subdued in the coming quarters before improving slightly during 2022.

Aside from China, the rapid rise in US goods demand was also a driving factor behind the commodity price surge last spring. While the reopening of the services sector has limited the growth in goods demand, it remains clearly elevated, with private goods consumption some 8.3% above the counterfactual trend in August. A new major spike in goods demand is unlikely as the fiscal support to US households ends and the spending normalizes amid fading pandemic restrictions and fears. Despite this, the elevated goods demand continues to contribute to the global supply challenges, and higher freight rates consequently support higher metal prices.