The dollar rout this week is the worst single week in nine months and returns the dollar to where it was last summer. It's no help that bets on the June rate hike are falling back, too, for reasons that are unclear. Good data yesterday, especially the Philly Fed, had only a marginal effect, raising the reading to 73.8% this morning from the 60's yesterday.

Yesterday's retracement, presumably on the special counsel plus good data, was still only about 25%. Retracements hardly ever last only one day. We usually get a bigger correction that last 3-5 days, especially after a gigantic move as we saw in the euro/dollar and dollar/yen.

Here's the problem: Trump. The tiger doesn't change his stripes and we can reasonably expect more turmoil and erratic course corrections going forward. The persistence of the rout shows traders are fed up. Doubt is high and rising that the promised tax cuts and fiscal stimulus are still on the table. In fact, the WSJ has a front-page story today that now Trump seeks to balance the budget over 10 years. This was always the campaign promise but a change in focus from earlier promises first to balloon the deficit and let growth pay down the debt in two years. The growth rates that would make that possible were always a ridiculous supposition, but never mind—it's the change of focus that counts.
Delay in reflation trade initiatives was already a given, and now the narrative is being jumbled up with added noise.

Now it remains to be seen whether the Fed and its steady hand can overcome these doubts. We also get some data that may help. Today we get a revision of the Atlanta Fed GDPNow model. It was 4.1% for Q2 last time (Tuesday). See the chart. The Blue Chip consensus and Atlanta Fed model might be converging. 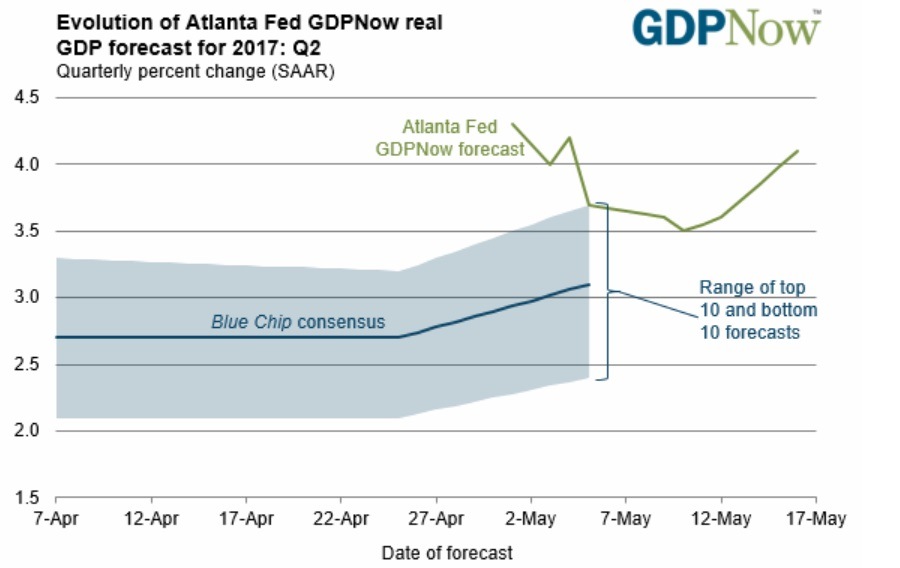 Trump called the investigation into his campaign's relationship with Russia a witch hunt, and you know what? He's right. Only just about everybody thinks there is an actual witch, probably Manafort and Flynn. It doesn't matter if Trump is, technically, not guilty of any wrong-doing. He chose to hire and associate with these guys, not exactly the top business leadership skill that some voters thought they were getting. Trump's lack of management skills is glaring.

Yesterday Bloomberg chief editor Micklethwait wrote "The Comey fracas is the latest in a long list of apparent transgressions for which a normal CEO might lose his job... This CEO-in-chief has failed to get things done; he has failed to build a strong team, especially in domestic policy; he hasn't dealt with conflicts of interest; and his communications is in shambles."

That sums it up nicely and reminds us that every single major press outlet shows a marked anti-Trump bias. It's not just the New York Times and Washington Post, whose investigative journalists are prodding the Establishment to Do Something about Trump. It's also the FT, the Wall Street Journal, The Economist, The Guardian, Reuters, Bloomberg, USA Today and just about every news outlet on the planet, including MSNBC and CNN. You have to search far and wide to find favorable reporting on Trump. Even Fox "News" has a hard time finding good things to say.

As we wrote yesterday, the probability of impeachment is very low. But the word is being used repeatedly now, even by Congressmen.

Here's the problem—a narcissist on the defensive is even more erratic and impulsive. He may seek new distractions. Next up in a trip to Saudi Arabia, Israel and the Vatican. Be afraid. Foreign Affairs Council chief Haass says the 8-day trip will test whether Trump is "up to the job." No, it won't. We already know he's not.

It would be nice to think that Trump is only a temporary shock and what financial professionals need to do is pay attention to the arc of economics and the hard data. Jobs and employment rates, inflation trends, manufacturing output, PPI's, and so on. For example, the price of oil is more important to the real economy than anything Trump can say or do. Well, no. To dismiss political risk is to forget the "madness of crowds."

And about that oil price. We often complain that the oil trading gang is the most irrational of all sectors. They can't always help it, poor things, given divergence between two metrics supposedly measuring the same thing (API and EIA supplies) but almost always wildly apart. They have to cope with other lousy data on supply and demand. Shale production surprised with robustness and a zippy pace of efficiency improvement.

Bloomberg reports "OPEC may get its members to agree to continue to tamp down oil production, but it will be a Pyrrhic victory. The biggest threat to the 13-member group's dominance has been U.S. shale." From Nov 2016, when the Saudis gave up the silly market share strategy, shale has already gained an irreversible advantage. Some producers can break even at $34. Overall, US shale producers have an output increase "equal to about half of the OPEC cuts and twice that of Russia's cuts," according to a Commerzbank report. Big bank forecasts vary but center around a US shale output of about 1 million barrels per day in 2018. OPEC's only hope is that the US continues its policy of letting stockpiles fall back.

But let's consult history. Having oil is a curse, the "Dutch disease." It tends to screw up management of the domestic economy, not to mention political life. Big producers like Venezuela and Nigeria, and probably Azerbaijan and some others, are failed states. It's all too likely that we will see disruption on the global supply side. It might even be possible that US shale can't make it up, and the US will again depend on the Saudis.

Enter the presidential trip to Riyadh. What if Trump gets a deal that guarantees some base of US purchases that is also some base of supply? It's not out of the question that such a deal could shift the narrative to a pro-Trump attitude. Maybe. But when in doubt, sell dollars.

Note to Readers: RTS has launched a Trade Copier service. We place our trades from the Afternoon Traders' Advisory in the retail spot market and your MT4 account mirrors the trades taken in the RTS account. You don't have to lift a finger. You get to pick how much leverage and exactly which currencies you want to include. If you are interested, please contact Paul Harris at [email protected] or visit http://www.rtsforex.com/trade-copier/.

Note to Readers 2: We will not publish any reports during the week of May 22-26. We will be travelling. Note that the following Monday, May 29, is Memorial Day and markets are closed, so no reports that day, either.