Manufacturing PMI expanded at its slowest rate since December 2012. At a mere 50.2, it is close to contraction and, whilst we could hope this is just a blip, its 12-month average points markedly lower to suggest their business cycle has most likely peaked. 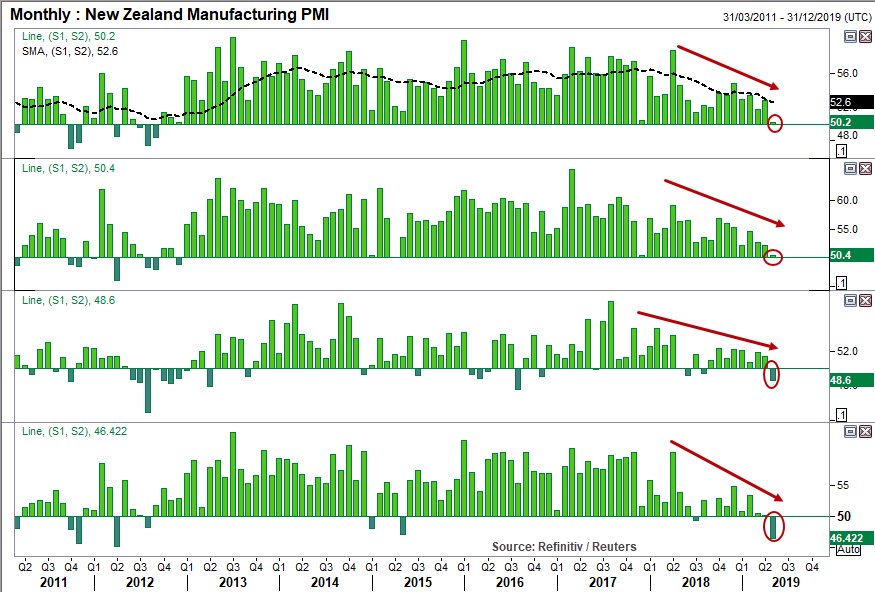 There are also some worrying signs of weakness within the sub-indices:

However, these are leading indicators and will take time to filter through to the economy (and eventually weigh on growth). Yet as markets are forward looking, they’re acting now and pushing NZD markedly lower. Furthermore, any weakness in NZ tends to have an impact their neighbours and key trade partner Australia (and visa versa), which has seen their US-10 year crash to a new historical low of just 1.37%.

There’s a slight risk-off vibe on FX markets surroundingMiddle East tensions (even if stocks are shrugging them off, for now) which is weighing on NZD/JPY and AUD/JPY. That NZ saw such shocking PMI today makes NZD the weakest major by an easy margin.

NZD/CAD Could Be Gearing Up For A 300 Pip-Slide
AU Unemployment Miss Drives The Aussie Lower | AUD/USD, AUD/JPY