"The US never got the virus under control before reopening" – said Dr. Anthony Fauci, and the results of this attempt to return to normal are impressive but probably as good as it gets.

The US economy gained 4.8 million jobs in June, better than three million expected, and on top of 90,000 added in revisions to previous months. The Unemployment Rate fell to 11.1%. That came on top of an increase in the participation rate from 60.8% to 61.5%.

So far, everything looks upbeat. However, accounting for misclassification issues, the jobless rate would have been 12.1%. The U-6 "real unemployment rate" dropped to 18%, still an elevated level.

The chart also provides a reminder that April saw a loss of around 20 million jobs, so the recent gains – around 7.3 million – compensate for only a third of positions lost.

Perhaps a better reflection of the US job market is the chart showing continuing jobless claims. The NFP overshadowed the most recent figures:

It gets worse when remembering that the NFP surveys were taken – on June 12, before the disease lifted its head again.

The US hit a record number of infections on Wednesday, around 50,000, while fatalities in Texas hit a six-week high. COVID-19 is spreading, especially in California, Arizona, Texas, and Florida – but also New York and New Jersey halted reopening plans.

These are only the latest developments – but the consumer did not wait for orders to stay at home. Data from SafeGraph showed a decline in foot traffic in cities suffering a spike in cases in the third week of June – just after the Non-Farm Payrolls surveys were taken. Another firm, Commerce Signals, showed a decline in credit and debit card spending from the end of May in most states. A third form, Homebase, estimates that as many as 20% of small businesses will permanently close.

Overall, high-frequency data suggests the economic situation has already begun deteriorating during June. The Non-Farm Payrolls report si far from being outdated – it shows a high watermark for the economy after the first wave. That peak is far off the pre-pandemic levels and is where the downturn begins.

A "reverse square root" – a sharp fall, a sharp rise to a lower level, and then flat at best: 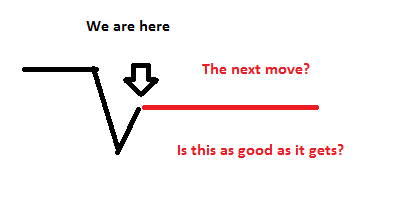 June's Non-Farm Payrolls figures provide a view of "as good as it gets," like that film starring Jack Nicholson. Will stock markets react adversely? After staging a rally worth around 20% – the best since 1998 – there is a case for a downside correction. Are we now where we were in late February? Is it the complacency before the fall?

Not necessarily. It is always essential to note the factors pushing up stocks – roughly $3 trillion of newly created money by the Federal Reserve and a lack of high-yielding alternatives. Americans now enjoy a long Independence Day weekend, allowing investors to digest everything. In the meantime, COVID-19 cases will likely continue rising. Will stocks suffer a day of reckoning on Monday? We will know soon enough.