Gold is facing continuing selling pressure as speculation mounts that the US Federal Reserve will hike the discount rate during a scheduled meeting late Monday. Any move by the Fed to raise the discount rate could be seen as highly bearish for the metal and signal the central bank’s direction in December.

Gold remained under pressure over the past week as the speculation over future US monetary policy continues. Initially Gold was down early in the week but a lacklustre US Unemployment Claims result buoyed the metal somewhat. The US Labour market result was on target with the forecast of 271k, however, the market was expecting a stronger result. Subsequently, Gold rose to around $1082.17 an ounce before finishing the week down at $1077.74.

Looking ahead, Gold is likely to have a volatile week as an extraordinary meeting of the US Federal Reserve has been announced to discuss monetary policy with a focus on rates. The meeting is largely to discuss the direction of the discount rate premium ahead of the December FOMC meeting. The discount rate is typically the premium above the Federal Funds Rate that is applied to commercial loans from the Fed to banking institutions. The reality is that it would be a highly hawkish signal, leading into December’s FOMC meeting, if the Fed was to raise the discount rate this month.

Subsequently, any move by the venerable central bank to lift the discount rate is likely to be perilous for Gold. The market will be watching the outcome of the meeting closely and some sharp volatility upon the release of any announcement is likely. 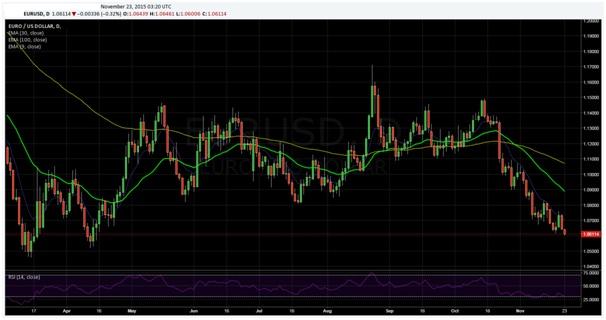 From a technical perspective, Gold has fallen strongly and remains well below the 100-Day moving average. The 12 and 30 EMA’s have also retained their bearishness, however, the RSI oscillator currently rests within over-sold territory. Given the recently discovered support level, our bias remains neutral ahead of the Federal Reserve meeting. Support is currently in place for the pair at $1072.40, and $1065.41. Resistance exists on the upside at $1098.06, $1156.83, and $1191.38.

Forex and CFDs are leveraged financial instruments. Trading on such leveraged products carries a high level of risk and may not be suitable for all investors. Please ensure that you read and fully understand the Risk Disclosure Policy before entering any transaction with Blackwell Global Investments Limited.