The crude oil price slump over the past year has been a painful experience for many producers but OPEC’s strategy might finally be paying off as the cartel appears to be on the cusp of cutting off any further growth in the US shale industry.

The Baker-Hughes rig count has been an excellent predictor of activity within the US shale oil industry and the key metric has been sliding for some time. The reality is that the current shale oil boom was largely predicated upon oil prices above the key $50.00 a barrel level. Subsequently, oil prices below that key level have incentivised well shuttering and rig stand-downs.

Although OPEC’s strategy of maintaining supply has seen some stark economic consequences, it would appear that it is impacting the US shale industry’s output. US crude oil production has been steadily declining and supply has now reached a level not seen since late 2014. In fact, the International Energy Agency has forecast that demand for OPEC crude will grow in 2015. This would potentially give OPEC exactly what they were seeking….protection of their market share. 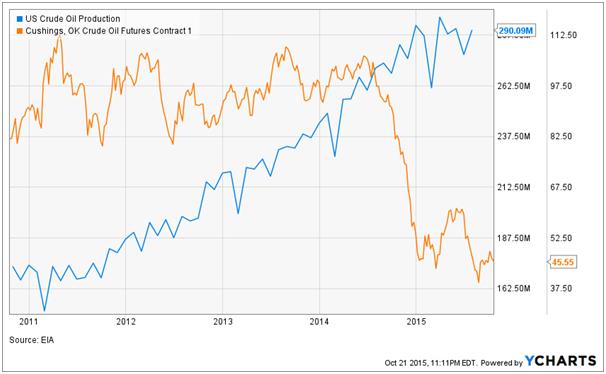 However, the price that has been paid by the OPEC member states has been heavy, given the rapidly growing budgets deficits throughout the Middle East. Several states are faced with severe economic imbalances that will need to be rapidly resolved in the coming months. Subsequently, the time is now ripe for OPEC to reduce production to restore balance and a sustainable equilibrium price within global markets.

Still, the question remains, to what extent have US producers been damaged by OPEC’s over-supply strategy. Given that it has taken over 12 months for supply to decline to pre-2015 level’s the invariable answer is…not much. Despite the tremendous global oil glut and sharply depressed crude prices, US producers have still managed to increase their efficiency and productive capacity throughout the year.

Effectively, OPEC has managed to reset supply in the markets to pre-shale oil boom levels, but the productive capacity still remains and is likely to restart as soon as WTI prices climb. Subsequently, until the global macro-economy strengthens, any price rally will likely be seen off by an increase in the rig count.

It is clear that OPEC needs to view the shale oil sector as a production operation that isn’t going away any time soon. Unless the member states are prepared for protracted economic warfare (which they are not) all they have effectively done is delay any potential loss of market share. Subsequently, depressed oil prices are here to stay unless either side blinks or they embark upon introducing an equilibrium price that is competitive for all participants.

Ultimately, OPEC might think they have dropped the hammer on US shale oil producers, but all they have done is extend the pain that is to come.