One look at the Gold (USD) daily chart tells us that the metal has had a tough time sustaining above 100-DMA since early March. The latest failure at 100-DMA (at USD 1150) happened last week, following which fresh offers pushed the metal lower to USD 1112.70 levels. 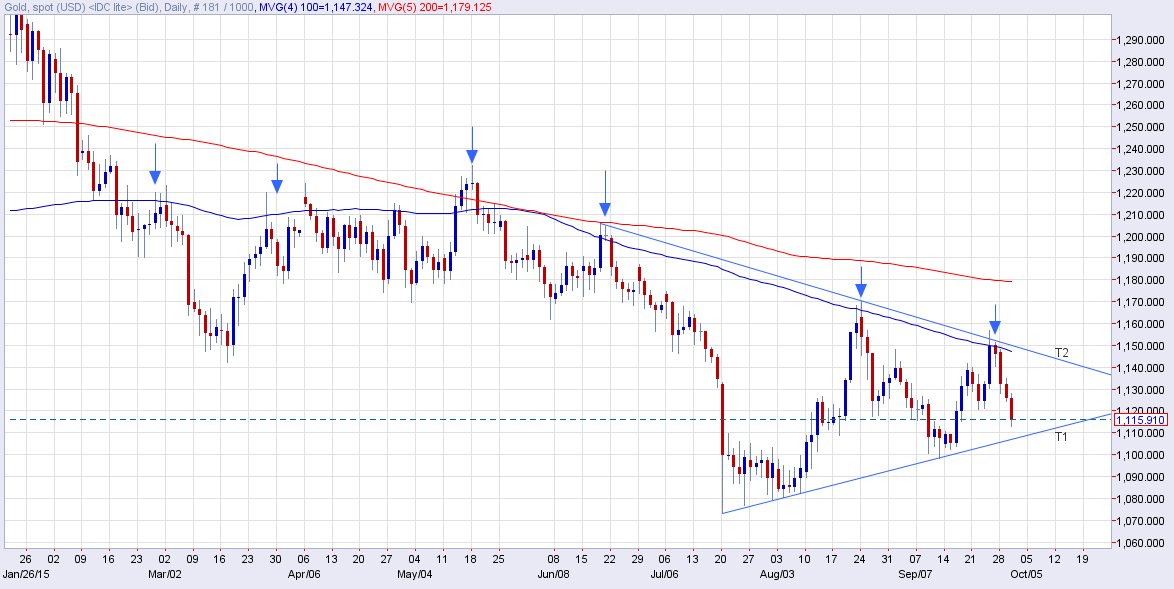 It can also be observed that the metal is moving in a symmetrical triangle formation on the daily chart, with prices fast approaching the lower end of the channel today. It is worth noting that two of the traditional safe haven assets â€“ Gold and JPY â€“ are moving in the symmetrical triangle against the US dollar ahead of the Us non-farm payrolls report.

Gold could take out 100-DMA in case â€“ The Fridayâ€™s Non-farm payrolls report disappoints market expectations. The US economy is expected to have added 202K jobs in September compared to 173K jobs in August. Along with the payrolls number, markets would also focus on the average hourly earnings report.

There may a number of different scenarios possible. However, from the trading perspective, the metalâ€™s daily closing following NFP report would be more important.

Moreover, a break above 100-DMA this time could be followed by a sharp rally as opposed to a fake breakout or fakeout seen since March. In this case, the metal faces an immediate resistance at 200-DMA currently located at USD 1180/Oz levels.

Metal could see downside breakout incase â€“ The NFP is strong enough to push up the 2015 rate hike bets. At present, a 25 basis point move is seen happening only in March 2016 (as per CME Fed watch). The October rate hike probability is 11%, while the December probability is about 40%. In case the NFP is strong enough to push up December rate hike bets, the metal could drop below the symmetrical triangle resistance and head towards the July low of USD 1073/Oz levels. A daily close below the symmetrical triangle support post strong NFP could open doors for a re-test of USD 1073/Oz

Still, the overall outlook stays positive as the metal is likely to witness a double bottom formation as detailed here