There was good news on the data front, as well as stellar earnings news from Walmart to add to the bullish tone in equities.

Bank of Japan governor Kuroda said the ultra-low rates may be maintained for a further period of well over a year. However, Kuroda warned against the idea of propping up the economy through unlimited money printing saying that “when a central bank monetises debt unlimitedly, it will most certainly trigger hyper-inflation and cause huge demand to the economy”.

There were comments in China state media saying China may have no interest in continuing trade talks with the US for now.

The Yuan fell past the psychologically important 6.9 per dollar level, something that previously had been speculated to eventually lead to the selling of Chinese Treasury holdings to prop up the currency.

The WTI future is trading at $62.98 per barrel. Geopolitical tensions in the Mideast continue to provide support, with the latest rally coming as Saudi Arabia blamed Iran and its proxies for attacks on Saudi oil infrastructure this week. 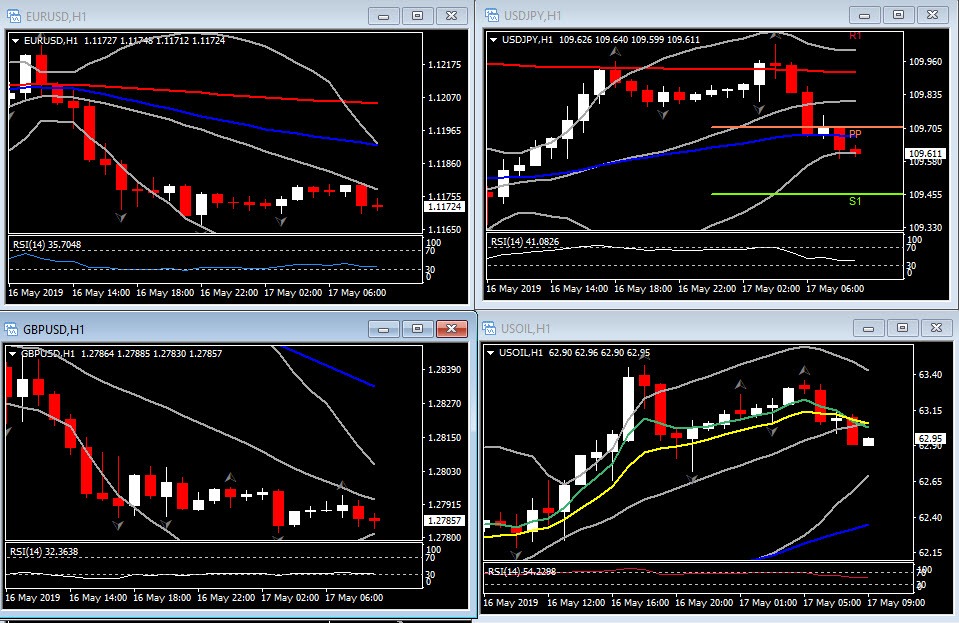 EURUSD fell to 8-session lows of 1.1172 at mid-morning, slipping from opening highs near 1.1210. The early round of Dollar friendly US data saw the pairing start its decent, with selling pick up some pace on the break under the 20-day MA of 1.1197. The May 7 low of 1.1167 Support was reached , however the asset manage to hold above it so far today. A break there could open the door for a test of the May 3 low of 1.1135.

Consumer Price Index (EUR, GMT 09:00) – The Euro Area CPI for April is expected to slow down slightly, at 0.7% from 1% last month. However, the overall picture remains largely unchanged, with headline inflation remaining modest, but underlying inflation starting to firm. No reason then for the ECB to add additional stimulus measures to an already very accommodative policy stance, and “low for longer” remains the message not just from the ECB.

Michigan Consumer Sentiment Index (USD, GMT 14:00) – The preliminary May Michigan sentiment reading is forecast at 97.7, up from the final April sentiment at 97.2.