Government debt in the Eurozone has been a concern for financial markets at various points over the past decade amid a significant buildup in leverage during and immediately after the Great Recession. In more recent years, however, governments have generally been de-levering relative to the size of the economy. Since the end of 2014, the Eurozone-wide government debt-to-GDP ratio has fallen about six percentage points, and last year the consolidated budget deficit was about 0.5% of Eurozone GDP. Government debt levels remain particularly high in some countries, however, especially Greece and Italy, which is the third largest economy in Europe.

In the near term, extremely low interest rates across Europe should keep financing costs in check, helping governments finance their debt without too much trouble. But, if interest rates were to rise substantially, or if one country were to break sharply with European Union budget rules in a way that induced a showdown with Brussels, the result could be an economic downturn that is driven by concerns over excessive government debt. Such a hypothetical downturn could be particularly painful if it were led by a major Eurozone economy, such as Italy, due to the financial sector's exposure to sovereign debt, a topic to which we will turn in the next installment of our series. 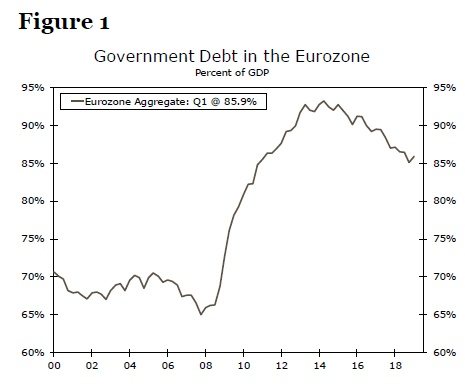 In more recent years, however, governments have generally been de-levering relative to the size of the economy. Since the end of 2014, the Eurozone-wide debt-to-GDP ratio has fallen about six percentage points. This contrasts with the United States, where the debt-to-GDP ratio for the government has continued to rise.2 Moreover, the consolidated budget deficit in the Eurozone was only 0.5% of GDP in 2018 (Figure 2, next page) compared to 4.2% of GDP in the United States. Why then do some analysts and financial market participants continue to fret about sovereign debt in the euro area? 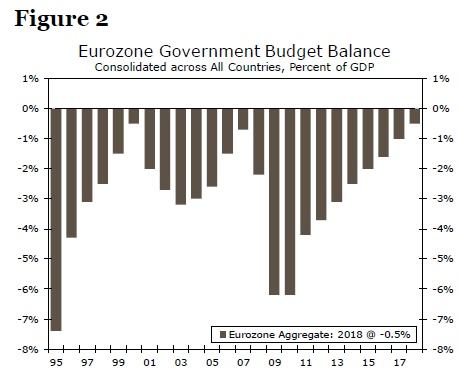