Precious metals have a fundamental problem the world over.

For thousands of years, humans have sought the ores and minerals needed to extract materials that have been useful to them. These range from sand, through oil, to gold, aluminum, iron, and various other metals.

Now man has reached the point where finding natural resources has become much more complicated – all the low-hanging fruit has been picked.

Nowhere has this been more obvious than in the field of precious metals.

The scarcer the metal, the more the cost of recovering it goes up. By definition, the extraction of gold from a goldmine in the middle of a jungle or desert will be more expensive than a mine situated in a more manageable environment.

Cost is crucial in mining because there are four phases to any operation - only one of which will make a profit for the company:

The exploration phase can take years and involve extensive research and development.

This starts with finding gold deposits – this is where specialized geologists will use strata maps to predict where large-scale deposits might be hidden. There are well-known rock formations that lend themselves to a high probability of a gold find.

The mining company then start test drilling in the areas that they geologists have recommended. Geophysics, geochemistry and remote sensing with sonar, laser, and seismic analysis help identify exact locations.

Rock and samples discovered are examined by mining engineers and geologists to estimate the quality of gold and the extent of the deposits. This is crucial because it determines whether mining will be viable or not.

At this point, the mining engineers will work on the logistics of the mine. The key factors are the type of mine proposed, any dangers or obstructions likely to be encountered, the impact of the mine on the local surroundings, and the feasibility of transporting the metals after extraction.

The ultimate key to all of these considerations is the gold price. This determines the viability of the mine given the actual costs of mining materials, specialized equipment, reagents and chemicals, the infrastructure, and the skilled labor necessary on-site, together with accommodation costs and facilities.

The higher the gold price, the more a mine can recover the expenses associated with sifting through larger quantities of lower grade ore. These processes can make or break a mining venture.

The more “free” gold lying around – “placer” gold, as it is known - the less it has to be separated from the crushed ore. This is the most expensive and time-consuming part of the mining operation, so reducing costs improves the profit curve.

Where local government and federal resources come in is during the next stage. This is when a proposed mine can make a local economy thrive. Infrastructure like roads, rail hubs and processing units, housing blocks, storage areas for equipment, and other facilities need to be built.

Done right, mining projects can provide jobs, taxes and boost local and national economies. The downside is that these things take time and money before the ground has even been struck.

Assuming the mine goes ahead, the engineers then steer the processing techniques according to the ore they find. They analyze the metallurgy of the finds then adapt the methods of extraction to local conditions and restrictions.

This processed ore ships to a refinery where any impurities are removed by melting away the gold, adding chloride, and “floating off” any unwanted substances like other metals or compounds in the mix.

This molten gold is then electrolyzed to remove the last contaminants in an electrolytic cell - this results in 99.99% pure gold - and it is then poured into bars.

This whole process continues until the mine is “exhausted,” - which means it has no gold-bearing ore left to process.

At this point, the mine is decommissioned and, where once it would have merely lain abandoned and forgotten, these days - environmental concerns top the agenda - and the land returned to as near its previous natural state as possible.

This is an expensive but vital step in the evolution of mining. It is one of the most significant considerations by governments and local authorities when granting mining companies licenses.

Mining, by nature, is hugely capital intensive and carries high financial and technical risks. These factors prevent mining companies from committing to projects without help from governments. Developing countries mostly have limited funds and budgets, along with underdeveloped banking, treasury, and regulatory services. 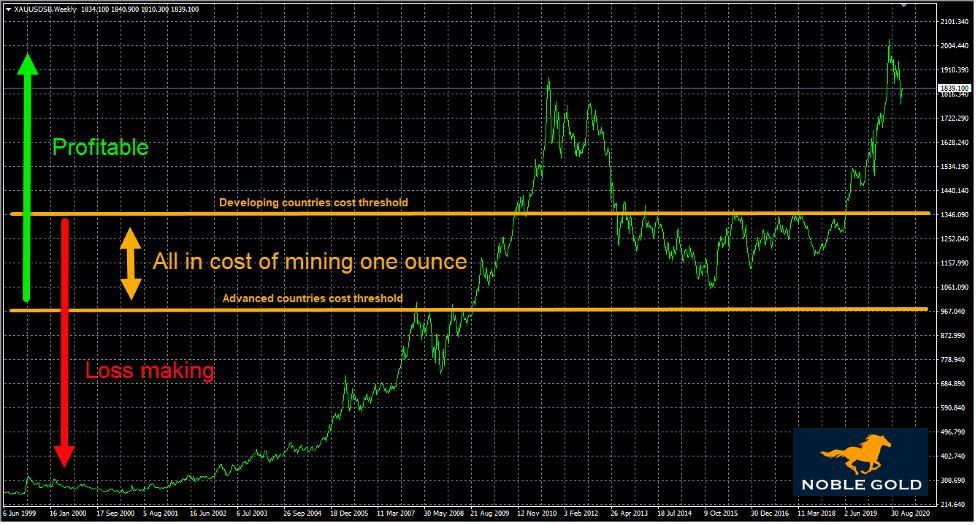 This chart we put together shows the cost/viability of mining operations since 1999.

The horizontal gold lines show the all-in cost of mining one ounce of gold. This is just for illustration purposes so these cost figures should not be taken as being exact - it is not a hard and fast rule - costs can vary significantly from country-to-country, and from company-to-company.

In general though, the all-in cost of mining in developed countries is more than that in advanced economies; but it is not always the case. This is mostly because of the existing infrastructure being in place to transport equipment and the refined product, as well as having water supplies and grid electricity on tap in the developed world.

Depending on the location of the proposed mine, companies can see at a glance whether the venture is profitable once the costs have been worked out and compared with the projected gold price.

A high or increasing gold price is essential to the long-term viability of any proposed mining operation.

This is why government support for mining sites and projects is essential for jobs and revenue.

A report by the World Gold Council estimated that over 70% of gold mining companies’ total expenditure stayed in the host country.

The same report noted that globally, the mining industry contributed over $171.3 billion to the world economy.

To put this in perspective, here are the market caps of the world’s largest gold producers:

In the US, the Office of Surface Mining, Reclamation, and Enforcement, of the US Department of the Interior deals with all aspects of proposed new mining operations.

This is a recent chart showing examples of the all-in costs of these mining operations in the US.

Mining companies in states like Nevada, with massive mining concerns, have good working relations with the government agencies to promote mining and its associated industries.

in a post-COVID world, industries like mining must be supported and encouraged by national and local governments as a means of producing long-term prosperity from a product that has ensured the economic well-being of humankind for thousands of years.

Let’s make sure this continues.