Evidence of Soros' Theory of Reflexivity remaining prevalent in financial markets re-emerged this week as the euro made its biggest single day advance since the Fed's announcement of QE in  2009. Simply put, the euro soared 4% due to misplaced and unfulfilled market expectations that the ECB would increase the size of its monthly asset purchases. The crowding out of euro-short algos was pivotal in the magnitude of the resulting short squeeze. But questioning the intensity of euro shorts deserves more time and attention than criticizing or doubting a central banker's decision. 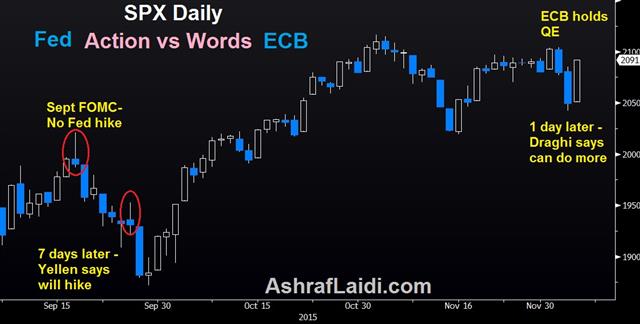 Question your Expectations, not the Central Bank Decision

Many who were “angry” at the Fed's decision to not raise rates in September –on the grounds that they got it wrong (on the grounds that they were mislead by prior Fed comments) –are the same who were critical of yesterday's ECB decision to under-deliver. I will not go into detail about how the ECB gave no reason to expect QE expansion or a bigger rate cut than 20 bps. That was the work of one or two major bank economist's forecasts, who were later followed by the rest of the pack—with a few adjustments.

My colleague Adam Button and I made it clear in several Intraday Market Thoughts and tweets that QE expansion would be difficult (or impossible) to attain at the December meeting, making way for only a rate cut and/or QE extension. Markets went too far with embracing the notion of “policy divergence”, assuming QE expansion was inevitable. Once corrected by the ECB, the result was massive. At the end of day, anyone who landed on planet euro and saw the spike in the single currency and 4% tumble in the DAX, would have expected the ECB had tapered the size of QE, or ended it completely. Not at all. It was all expectations' fault. As George Soros postulated in his version of Reflexivity Theory into economics, markets are principally driven by expectations. Once the basis of those expectations is altered (ECB's policy actions), the market corrects.

Today's Draghi Speech is no different from Yesterday's

Some say expectations were fed by the central bankers themselves. Not at all (again). Today's Draghi speech in NY appears to be the main catalyst behind the 2% rally in US indices. The main reason to the rally is attributed to Draghi's statement indicating the ECB stood ready to deploy “further tools if necessary”. It may not matter that Draghi made a similar statement at yesterday's conference i.e. more measures would/could be implemented if the need arose. One day seems to be too late for traders who lost money, but not too late to make it some of it back today.

A similar situation occurred on September 24, when Fed chair Yellen made a hawkish speech seven days after giving highly dovish press conference on the day of the Fed decision to not raise rates. Markets bottomed three sessions later.

Undoubtedly, Draghi's power of words continues to hold sway. But since pulling the QE trigger in March, the timing of the words becomes as important as the words themselves. This is no longer September 2012, when “we'll do what it takes” sufficed.