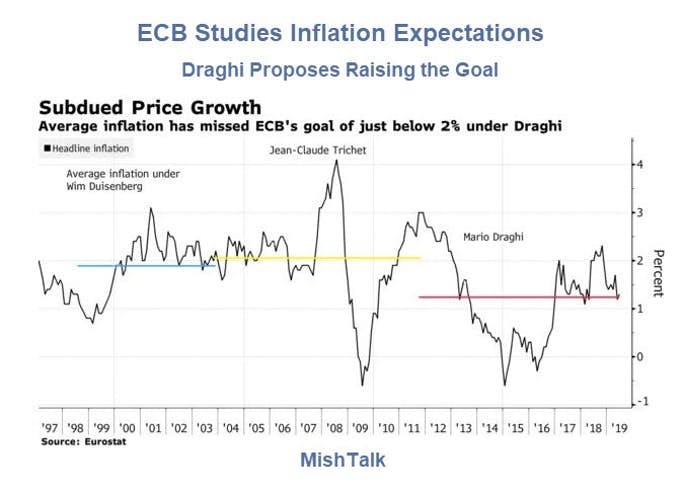 ECB president Mario Draghi questions the ECB's mantra of keeping inflation 'below, but close to 2%'. Draghi now favors ‘symmetry’ around the target.

European Central Bank staff have begun studying a potential revamp of their inflation goal, according to officials familiar with the matter, in a move that could embolden policy makers to pursue monetary stimulus for longer.

The staff are informally analyzing the institution’s policy approach, including the question of whether the current target of consumer-price growth “below, but close to, 2%” is still appropriate for the post-crisis era.

President Mario Draghi favors a “symmetrical” approach, meaning flexibility to be either above or below a specific 2% goal, the officials said, asking not to be identified as the work so far is confidential and preliminary. That would allow the ECB to keep inflation elevated for a while after a period of weakness to ensure price growth is entrenched.

Governing Council members were given a presentation by Massimo Rostagno, the ECB’s director general for monetary policy, on the effectiveness of the current target, according to one of the officials. Rostagno showed that a straightforward 2% objective would make it easier to raise inflation and price expectations, and reduce the need to push interest rates deeper below zero in the future.

Changing the goal itself would probably require a formal review, the officials said. An ECB spokesman declined to comment.

Absurd Discussion on Many levels

It's not just the ECB chasing its tail, many Fed governors also support higher inflation targets without understanding why or how damaging those target are.

The Fed has Reblown the Housing Bubble: Last Chance for a Good Price Was 7 Years Ago 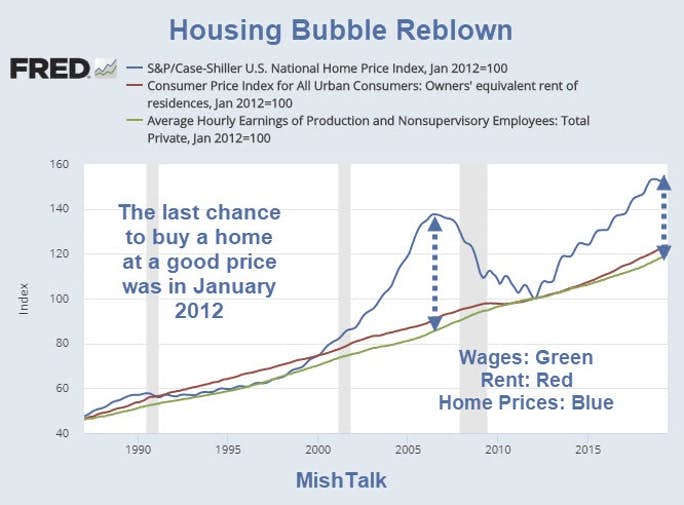 Economists ignore asset bubbles in their estimation of inflation. Those bubbles are very easy to spot but in the drive for 2% the bubbles don't count. Only rent does. Inflation is well over 2% if the Fed would only count actual home prices.

Central bankers are hell bent on reaching 2% without ever explaining why and without understanding how to measure it. With poor demographics, increasing productivity, and global wage arbitrage, a 2% goal is especially counterproductive.

If you can't put the basketball in the hoop, raising the hoop logically cannot help. Yet, Rostagno claims to have shown that a straightforward 2% objective would make it easier to raise inflation and price expectations. The idea is laughable. Why not 4%, 8%, or 88%? Unless there are actual policy changes targets are useless.

The Fed and ECB keep fighting the deflation boogeyman.

Yet, the BIS did a historical study and found routine price deflation was not any problem at all.

For a discussion of the BIS study, please see Historical Perspective on CPI Deflations: How Damaging are They?

The Fed and ECB are huge believers in "inflation expectations" and other economic nonsense such as the Phillips Curve. 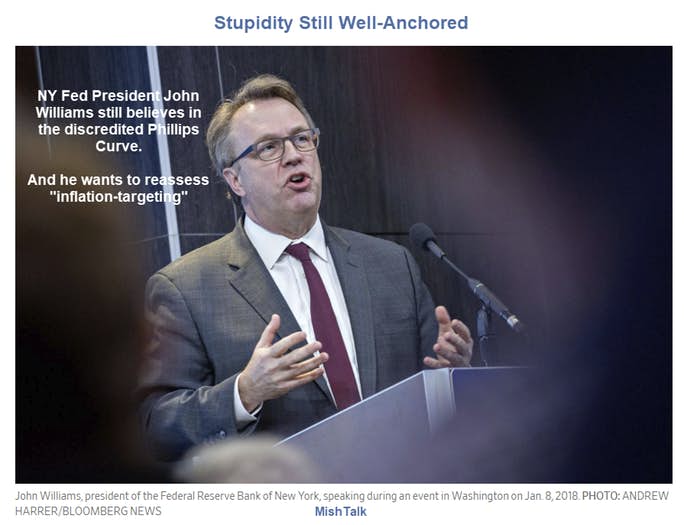 Hello Jerome Powell, We Have Questions

In his March 8 speech on Normalization and the Road Ahead, Fed Chair Jerome Powell spoke of diversity, zero-bound interest rate problem, and the Fed's path to normalization.

In his speech, Powell stated "Makeup strategies are probably the most prominent idea and deserve serious attention," while simultaneously admitting an "uncertain distance between models and reality".

The "makeup" strategy implies having a higher rate of inflation to make up for past underperformance vs a 2.0% target.

In an open letter to the Fed Chair, I penned Hello Jerome Powell, We Have Questions

Why does it matter?

Scrutiny of elastic vs inelastic items in the CPI shows it doesn't. 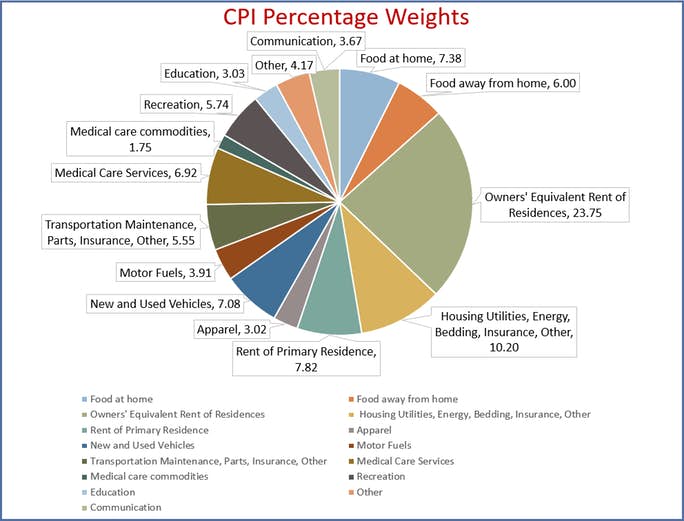 Under "inflation expectations" theory, if consumers are convinced prices will go up, they will rush out to buy things causing an allegedly beneficial price spiral.

Q. If someone needs a refrigerator, toaster, stove or a toilet because it broke, will they wait two months if they think prices will decline? Q. Better deals on TVs and computers are always around the corner. Does that stop TV and computer purchases?

At the top of the list of widely-believed but false central bank economic theories is the notion that falling retail prices are bad for the economy.

Central banks acting on those group-think beliefs attempt to modify inflation exceptions while not factoring in asset price appreciation.

Invariably, the result is bubbles.

Why does the Fed ignore asset valuation models that do work over the long haul in favor of economic models that admittedly have an "uncertain distance between models and reality"?

Today, the ECB marches further down the same illogical path.

Once again, I ask: Hello Jerome Powell, We Have Questions.

Can we please have a rational discussion?