Due to the complexity of understanding its physical demand and supply aspects, let alone obtaining credible data on the metal, most speculative market participants are continuing to use the dollar as a gauge for the direction of gold’s short-term price outlook. On that front, the greenback managed to regain some lost ground this morning most notably against the British pound after a dovish Bank of England’s policy statement and on the back of a sharp drop in US jobless claims. As a result, gold turned lower. However, the metal recovered its poise during the second half of the European session and was trading flat at the time of this writing. There was a corresponding fall in the value of the dollar as commodity currencies, the euro and even the pound found some support.

Many speculators are starting to believe that the Fed will probably hold off raising rates until the start of next year after the recent deterioration in US data (e.g. September’s jobs report). If these opinions translate into actual dollar weakness – and perhaps combined with the possibility of another round of selling for stocks, now that the Chinese markets have reopened and the US third quarter reporting season is about to get underway – this could put upward pressure on gold, particularly as it also appears to have broken a long-term bearish trend line that goes back to the beginning of this year. Short-term speculators may therefore be looking to buy the dips in gold rather than sell into the rallies until this strategy fails to work.

Today’s focus will be on the minutes of the Fed’s September meeting, due out at 19:00 BST (14:00 ET). This particular meeting was the first where raising interest rates was a serious possibility, though as it turned out of course the Fed decided it was not the right time to do so. Since then, many Fed officials have spoken with some suggesting that raising rates had been discussed and it was a close call. Others have said the contrary. The minutes should reveal which was the case. But will it matter much? Traders will likely take the minutes with a pinch of salt, especially if they convey a hawkish message, since that jobs report must have raised a few concerns among rate setters. However if the Fed was already slightly more dovish than expected at its September meeting, they will likely have turned even more dovish now. So the dollar’s likely negative reaction may be amplified if we see some eye catching dovish remarks from the minutes. This should in theory be good news for gold, though stocks may also benefit and this potential risk-on trade could hold the metal back a little bit.

As mentioned, gold looks like it has finally broken a long-term bearish trend line. The bulls will have liked the fact it came back for a re-test of this broken trend line and this time found support on the upper side of it at $1135/6 (i.e. today’s low). The metal is starting to catch a few people’s eyes and it may start shining more brightly if it also takes out the key resistance zone around $1150-55 where it had previously struggled. A decisive break above here could see the metal go for the 200-day moving average at $1177/8 at the very least and possibly even the Fibonacci convergence levels around $1189/92 and then $1214/20 (these areas circled on the chart). However if this proves to be another false break out then expect to see a fast move in the opposite direction as the bulls rush for exits. 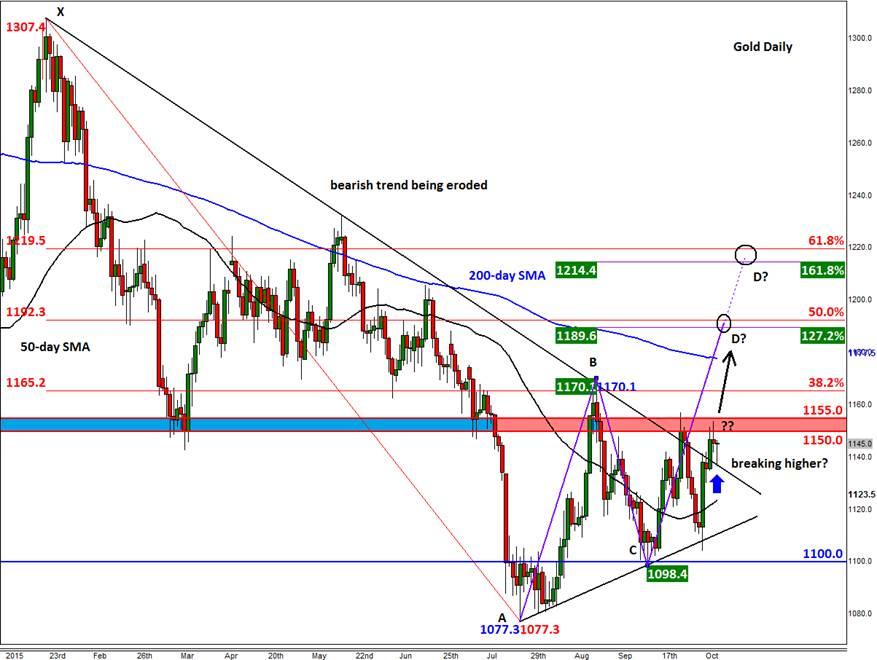