It has been a bad day for the UK retail sector. First it was Tesco which confirmed that its first half profit had been overstated and said chairman Sir Richard Broadbent would step down. The news weighed heavily on the stock, while some of the other UK retailers lost ground in Tesco’s slipstream. Then we had the latest retail sales data for the month of September, which disappointed expectations as the mild weather hit sales of winter clothes. The 0.3% month-over-month dropped was worse than a fall of 0.1% expected, although this was offset to a degree by a revision in the August reading to +0.3 from +0.2 per cent previously. On top of the retail sector pessimism, sentiment took another knock on news that mortgage approvals rose by a below-forecast 39,300 applications in September. To make matters worse, the CBI industrial trends survey fell for a second straight month in October, printing -6. This was the biggest drop since July 2013, easily missing expectations of -3.

As a result, the FTSE was unable to join the European market rally that was triggered by some positive PMI numbers from the Eurozone, although as the session wore on their rally faded too as investors read the details of the PMI surveys and realised they were not as good as the headline numbers would have you believe. The pound, too, has been out of favour as short-covering in the EUR/GBP cross caused the GBP/USD to momentarily drop below the psychological 1.60 handle. Although it has since bounced back a little, further losses could be on the way, especially if the preliminary third quarter UK GDP reading also disappoints expectations (+0.7%) tomorrow. The downbeat UK data pushes the first Bank of England rate hike further out, which is obviously not good for the pound.

On top of the macro concerns, the technicals are looking bleak for the Cable. As can be seen on the daily chart in figure 1, the GBP/USD has been stuck in a strong downward trend ever since it topped at just below 1.72 in July. The 50 and 200 daily averages are both pointing lower after forming a bearish “Death Crossover.” The momentum indicator RSI, has been unable to climb above the key 60 level and is struggling to hold above 40, despite forming a bullish triple divergence recently. If support at 1.6000 is decisively broken now then we could see a move down to last week’s low of 1.5875 soon. Below that level, the next bearish targets are at 1.5850, 1.5800 and 1.5720 – the latter being the 61.8% Fibonacci retracement level of the rally from July 2013 low. 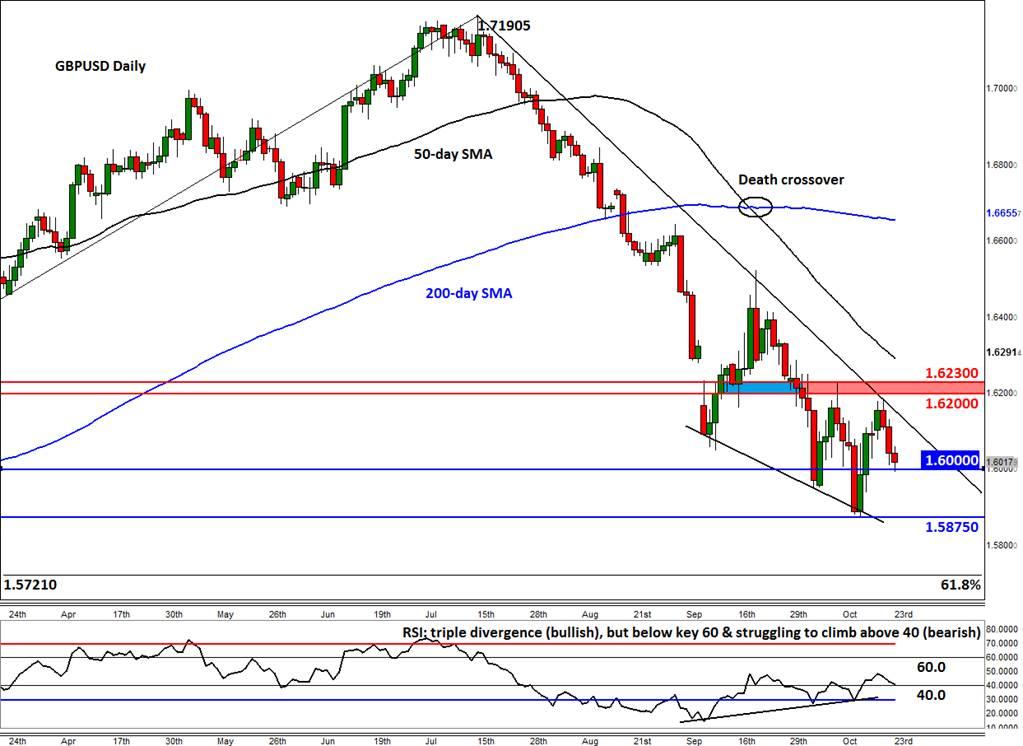 A close look at the 1-hour chart in figure 2 reveals that the Cable has been stuck in a short-term bearish channel over the past few days. As mentioned, price has bounced off the 1.5990/1.6000 area following the data releases. As well as psychological support, this is where we have the 61.8% Fibonacci retracement level of the upswing from last week’s low. So, it is a key support area. Thus if this level is broken then that could give rise to follow-up technical selling. On this time frame, the next level of support is at 1.5940, which, as well as the support trend of the bearish channel, ties in with the 78.6% Fibonacci level. Meanwhile a potential break above the upper trend of the channel would end the near-term bearish outlook, particularly if price also takes out resistance at 1.6060. In that case, a move towards the key 1.6200/30 area could get underway (see the daily chart). 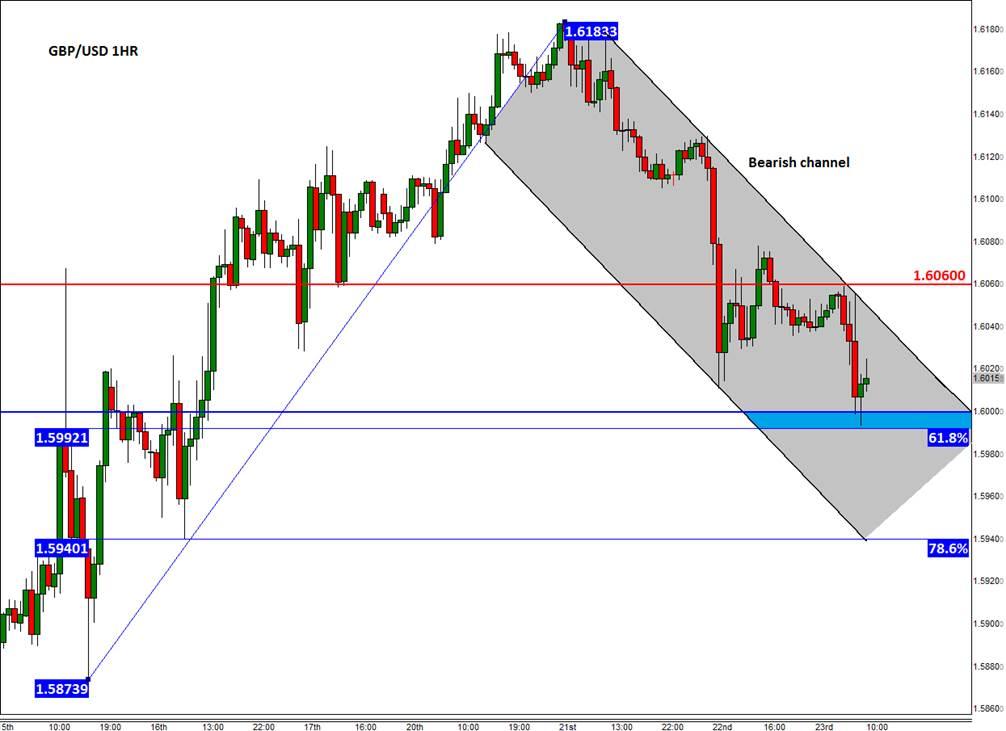