The September Non-Farm Payroll report will be released tomorrow at 8:30 ET (13:30 GMT), with expectations centered on a headline print of around 216k new jobs. My NFP proprietary model suggests that the NFP report will print roughly in line with expectations, with leading indicators suggesting a September headline NFP reading of 221k.
The model has been historically reliable, showing a correlation coefficient of .90 with the unrevised NFP headline figure dating back to 2001 (1.0 would show a perfect 100% correlation). As always, readers should note that past results are not necessarily indicative of future results.

Labor market indicators generally improved this month: The ADP national employment report ticked up to 213k from 204k last month, while initial jobless claims continued their steady decline to 281k new claims in the survey week, one of the lowest readings for an NFP survey week in the past 15 years! However, we did see Manufacturing PMI employment drop 3.5 points to 54.6, and the generally reliable Services PMI survey will not be released until after tomorrow’s headline NFP report.

Last month, the historic streak of six consecutive months of 200k+ job growth ended abruptly with a disappointing 141k reading. Looking at the preponderance of labor market data, it appears likely that last month’s report was a one-off outlier rather than the beginning of a new, slower trend in job growth. Recent Federal Reserve comments support this view, as the central bank prefers to look at trends in economic data, rather than single data points. That said, the US dollar remains vulnerable to a correction after its massive run higher, so another disappointing reading could provide the catalyst for a big reversal in the greenback.

See three possible scenarios for this month’s NFP report, along with the likely market reaction below:

Historically, USD/JPY has one of the most reliable reactions to payrolls data, so traders with a strong bias on the outcome of the report may want to consider trading that pair.

Though this type of model can provide an objective, data-driven forecast for the NFP report, readers should note that the U.S. labor market is notoriously difficult to foretell and that all forecasts should be taken with a grain of salt. As always, tomorrow’s report may come in far above or below my model’s projection, so it’s absolutely essential to use stop losses and proper risk management in case we see an unexpected move. Finally, readers should note that stop loss orders will not necessarily limit losses in fast-moving markets.

2. Another View: Getting Back to Good

This month my Non-Farm Payroll model is forecasting a healthy 247k increase in jobs in September 2014, which would put the US employment situation back on the track it derailed from last month.  Unfortunately, there are a couple of typically reliable reports unavailable to us before the NFP release which could have had an outsized impact on my prediction.

Both of the service sector ISM reports won’t be released until after NFP is announced tomorrow, and considering the fact that nearly 80% of the US workforce is services-providing, the absence of those reports is a pretty big deal.  For instance, if both of the employment subcomponents for the service ISMs decreased, my model would have kicked out a 213k; if both were positive, the result would have been 281k.  That’s quite the divergence, but in the grand scheme of things, anywhere within that range would likely be viewed as a positive sign for the US economy and a green light for the Federal Reserve to continue along the path to an interest rate hike in Q1 2015.

Using my forecast model had previously required me to take last month’s result and either add to or subtract from it based on ten employment reports released before NFP; however, all of the weather-related craziness in the first quarter of 2014 created a challenge to that doctrine in that previous results were anticipated to be revised substantially higher. While that anticipation turned out to be inherently incorrect, my forecast was actually fairly accurate utilizing the average calculation.  Therefore, I will continue to repeat the method of using a three-month average which takes into consideration the possibility of a revision.  So instead of using 142k as my base (last month’s result), it will now be 207k (an average of 267k June, 212k July, and 142k August).

Here is the breakdown of the leading employment reports: 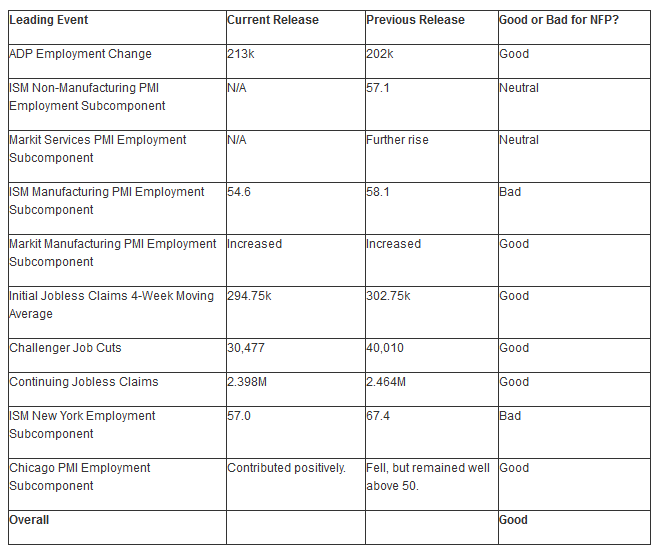 As you can see from the table above, the majority of the employment indicators gave a positive score, with only the regional ISM New York and nationwide ISM Manufacturing giving declining signals.  Taking all these results together, I came up with my NFP estimation of 247k new jobs created in September 2014.  This is better than the consensus estimate of around 215k, and could prompt the USD to continue its impressive strength as we see volatility increase in the post summer months.

In addition to the NFP headline and previous month’s revisions, the market may concentrate on Average Hourly Earnings secondarily, and the Unemployment Rate tangentially.   Hourly Earnings have become more significant as Fed Chair Janet Yellen has mentioned that she would like to see the salaries of employed increase in addition to the counted numbers.  The initial reaction is likely to be as a result of the headline though with the other factors increasing in significance as US stocks open for trade.  Therefore, if my forecasting model presumes correctly, I would expect to see an initial surge in a currency pair like the USD/JPY, which typically has the most logical reaction to NFP releases and could retake the 110 handle.

3. View How Our NFP Forecasts Compare 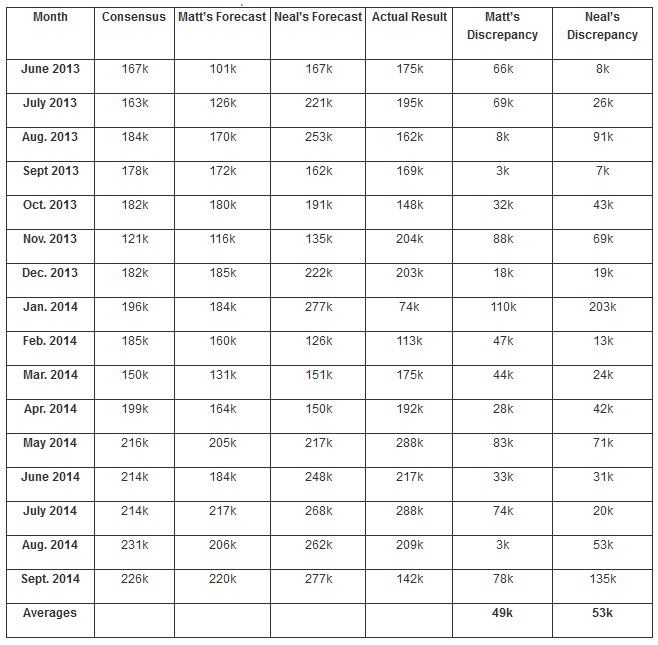