Greece is back. The troubled peripheral nation, who not that long ago was on the verge of being thrown out of the currency bloc and is still many billions in debt to the IMF and its European masters, sorry, I mean peers, is making a triumphant return to the bond markets after a 4-year tumultuous hiatus. Athens is selling EUR 3bn of 5-year debt with a yield of 4.95%. To put this in some context, Russia has to pay 9.8% to borrow for the same maturity. The rush for Greek debt is interesting since it seems to defy all fundamental logic:

The political back drop is also weak, which makes the attraction of this bond sale equally puzzling:

So why can Greece sell debt so easily

Who is buying this debt?

Overall, this debt sale is a triumph in financial terms, however below the fancy sub -5% yield lies a simmering bed of risk. Greece is still the weakest link in the currency bloc and if the sovereign crisis flares up once more then Athens could struggle to stay in the euro-area. Next month’s European elections are also a risk that has not been spoken about in much detail. While gains for SYRZIA are not likely to disrupt the European parliament, they could have an impact on national politics. SYRZIA’s popularity is ahead of the ruling centre-right party and if the party becomes emboldened by victory at next month’s European elections then we could see them agitate for snap elections at home, which could rattle market confidence once again.

Also, some investors may be buying Greek debt in the hope that the ECB embarks on QE or other loosening policies, if the bank fails to do this then we could see volatility return to peripheral markets.

EURUSD has been rallying into the Greek debt auction and since reaching a low of 1.3694 on Friday, it has made an impressive recovery. A daily close above 1.3857, the 61.8% retracement of the March – April decline, is a bullish development, however the 1.3900-1.4000 level has been sticky for EURUSD in the past and it may be too big a hurdle to the short term as the recovery looks a little over-extended.

EURUSD is also a beneficiary of dollar weakness, which tumbled on the back of the dovish Fed minutes last night. Overall, whether or not we get above 1.40 remains unclear as we haven’t been able to do so in recent weeks and it could ignite some rhetoric from the ECB who have been prone to talking down the EUR of late. Some key levels to watch include: 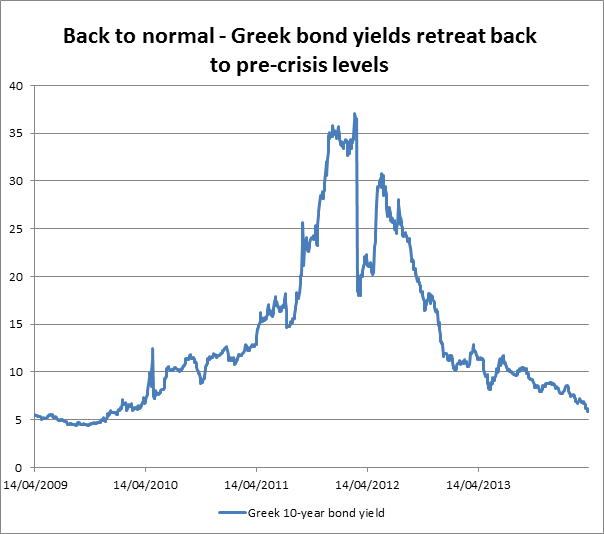