In the past year, the price US consumers pay for natural gas has more than doubled. About 38 percent of electricity in the US comes from natural gas according to the Energy Information Administration EIA.

And about half of the homes in the United States use natural gas for space heating and water heating. 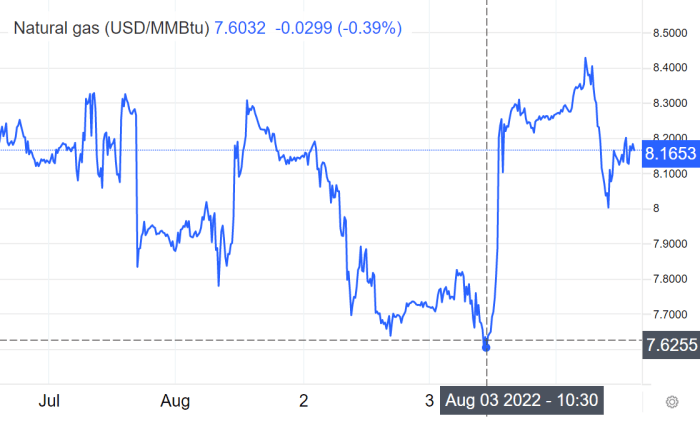 US natural gas prices surged after a key export terminal in Texas reached an agreement with regulators to restart as soon as October after an explosion.

Freeport LNG, which was shut down in June after a blast, has entered into an agreement with the Pipeline and Hazardous Materials Safety Administration to resume operations in early October at almost full capacity, the operator said in a emailed statement Wednesday. That would boost demand for natural gas by nearly 2 billion cubic feet a day, equivalent to roughly 2% of domestic output.

The restart of Freeport LNG is poised to increase the strain on US inventories of the heating and power-generation fuel ahead of winter. Concern about tightly supply has triggered stomach-churning volatility and led prices to more than double this year. Gas held in salt caverns and depleted aquifers is about 12% below levels typically seen for this time of the year, and booming domestic demand this summer has limited suppliers’ ability to add gas to storage. 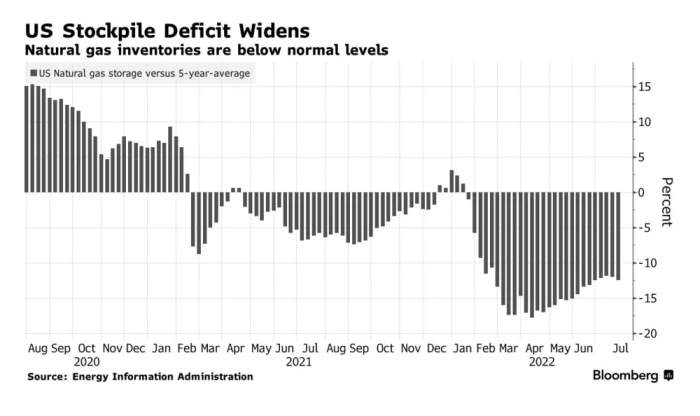 Heading into Winter, the stockpile of US natural gas is about twelve percent below normal. 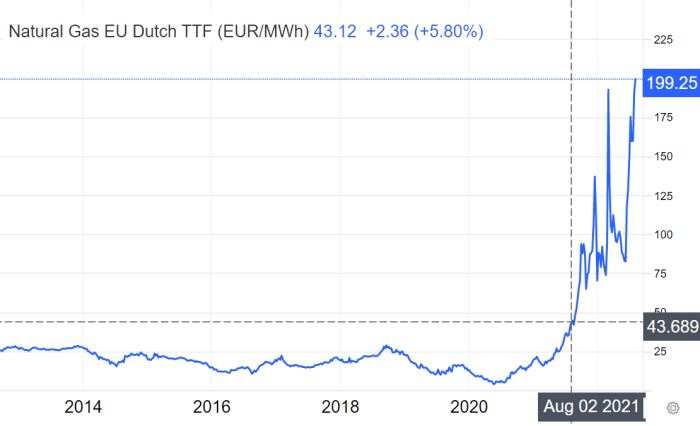 Thanks to sanctions and the now-abandoned Nord Stream II pipeline from Russia to the Europe, the EU is struggling to get gas. 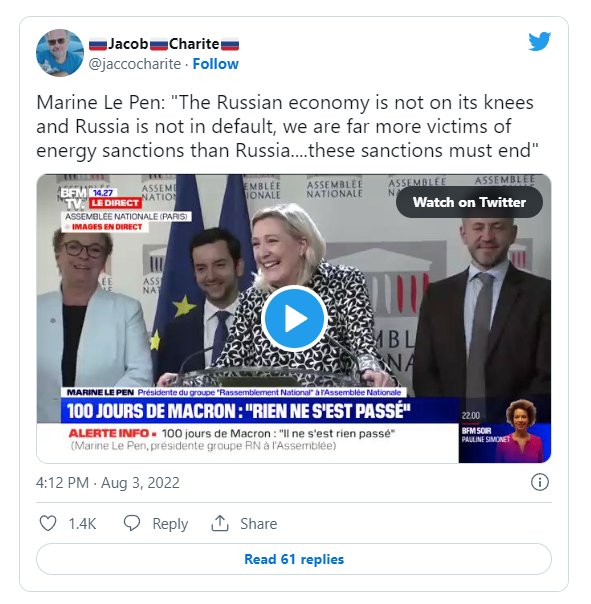 "I want these sanctions to end," Le Pen said at a parliamentary press conference on Tuesday. "Otherwise Europe is going to face a blackout, notably on the question of Russian gas imports. "The sanctions are simply useless. All they do is make Europeans suffer. And that, incidentally, includes French people.

"You'd need a huge dose of bad faith not to realize that, contrary to the inflated claims of our government, the Russian economy is not on its knees. They are not on the brink of bankruptcy.

"We are suffering far more from these sanctions than the Russians are," said the MP for the northern Pas-de-Calais constituency. They can find other buyers for their oil and gas, they can get around the embargoes, she added. "This has been a series of failures by the European Union."

Le Pen is correct on all counts. Putin is delivering only 20-40% of normal gas supply to Europe but at a price that is 4.5 times higher. 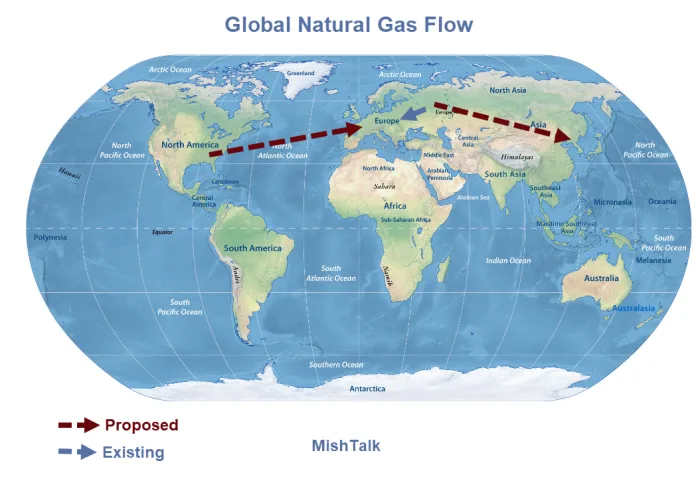 Instead of getting natural gas from hundreds of miles away over existing pipelines we compress natural gas in the US then ship it 4,700 miles away Europe.

De-globalization to punish Russia and China is seriously impacting global supply chains and increasing costs for everyone,

The one point Le Pen misses is that the EU would still vulnerable because Russia can no longer be considered a reliable partner. Once Russia has pipelines to China, it will not need the EU.

That is years away however. Meanwhile, supply chain disruptions and de-globalization are driving prices up everywhere.

For further discussion, please see De-Globalization: New Supply Chains Are Inefficient and Will Drive Up Inflation

We have economic illiterates running the country and running the Fed. The average Joe is getting killed.

Dear President Biden, the above charts speak for themselves. If you want to lower inflation, stop the sanctions.

Gold struggles around $1,800, with key focus on Fed Minutes

Gold Price is struggling to find demand at the start of the week near the $1,800 mark, as bulls give into the bearish pressures amid a cautious risk sentiment. XAU/USD yielded a weekly close above key 50 DMA, Fed Minutes in focus.