GBPUSD survived Monday’s freefall to the uncharted territory with minor damage, minimizing its losses from a record low of 1.0324 to 1.0683.

The pair is currently aiming for a climb above Friday’s closing price of 1.0845 as the RSI and the stochastics seem to have bottomed in the oversold area, signaling a potential upside reversal. Yet, with the indicators still well dipped in the bearish territory and the price itself far below the broken bearish channel, downside risks may keep lingering in the background in the short term.

An extension above the nearby resistance of 1.0845 – 1.0930 could provide direct access to the key 1.1200 zone, a break of which is needed to clear the way towards the 20-day simple moving average (SMA) at 1.1377 and the pandemic low of 1.1408. The 1.1545 barrier has been capping bullish actions since early this month and may again come into play ahead of the previous high of 1.1737 if the recovery continues.

On the downside, the 1.0674 zone is acting as support for the second consecutive day. If that floor collapses, the 1.0500 psychological mark may attempt to cancel any downfalls towards the 1.0324 record low. Should the bears re-activate the long-term downtrend, traders will immediately bring the case of parity under examination.

In brief, although GBPUSD is trying to heal its wounds from a record low, the pair is not out of the woods yet. Traders will wait for a continuation of the rebound above the 1.0845-1.0930 region before they increase their buying orders. 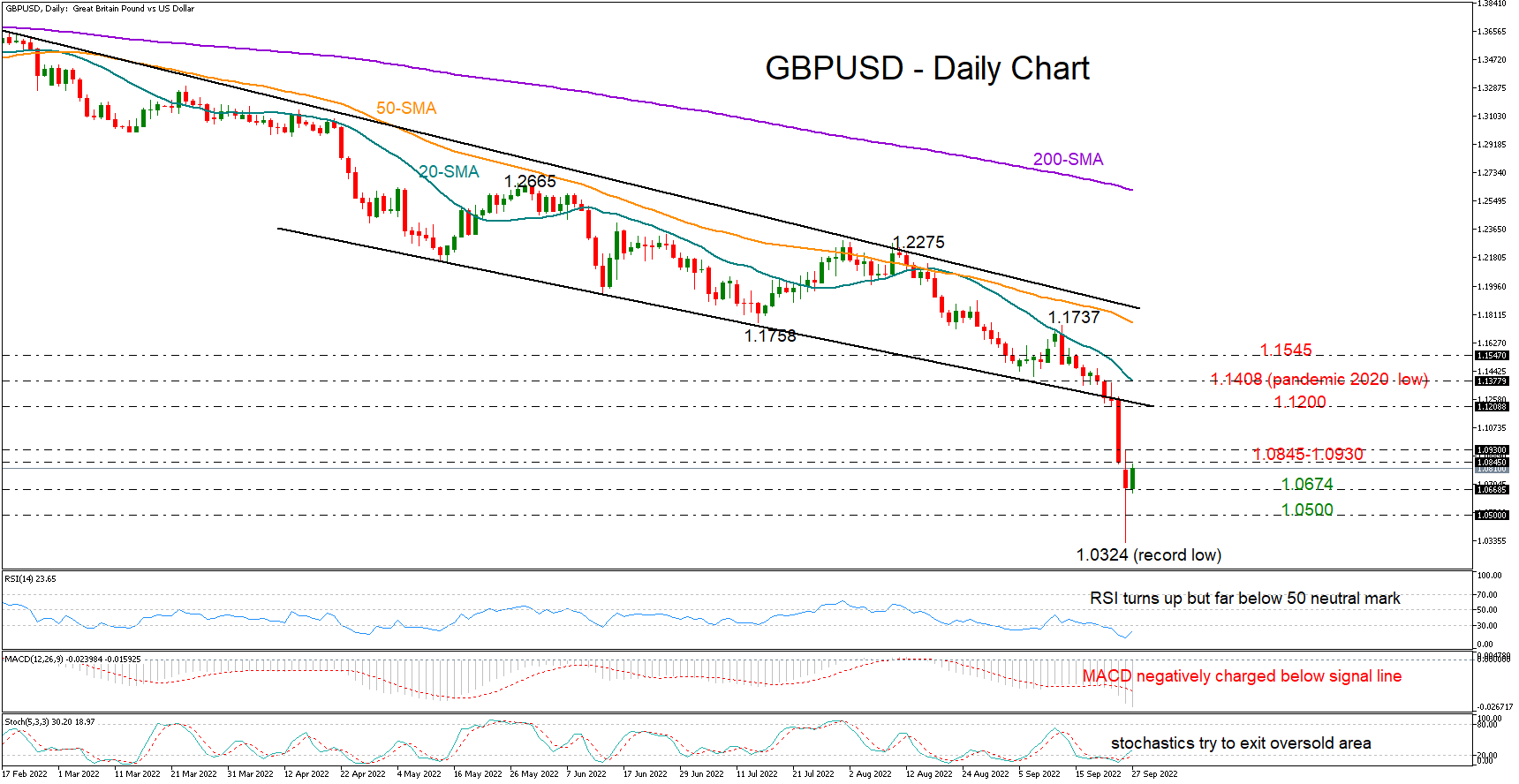 EURJPY has been experiencing a sharp drop after its latest advance came to a halt at the eight-year high of 145.62. However, in the last couple of sessions, the pair has managed to stop its bleeding as the 50-day simple moving average (SMA) has been acting as a strong floor.

The short-term oscillators currently suggest that near-term risks are tilted to the downside. Specifically, the RSI is flatlining below its 50-neutral mark, while the MACD histogram is retreating below its red signal line but remains in the positive zone.

If the price profoundly crosses below its 50-day SMA, the recent support zone of 138.70, which overlaps with the upper boundary of the Ichimoku cloud, might act as the first line of defence. Should that floor collapse, the pair could descend towards the recent low of 137.30. Any further drop could then cease at 135.50 before the July low of 133.40 comes under examination.

To the upside, bullish moves could encounter immediate resistance at the 140.25 barrier. A break above the latter could turn the spotlight to 142.30, which has acted both as resistance and support in the last two months. Failing to halt there, the bulls may aim at the June peaks of 144.27 before the eight-year high of 145.62 appears on the radar.

Overall, despite its recent retreat, EURJPY is retaining its positive short-term picture. Nevertheless, a clear close beneath the 50-day SMA could ignite further selling interest, increasing sellers' hopes for a sustained downfall. 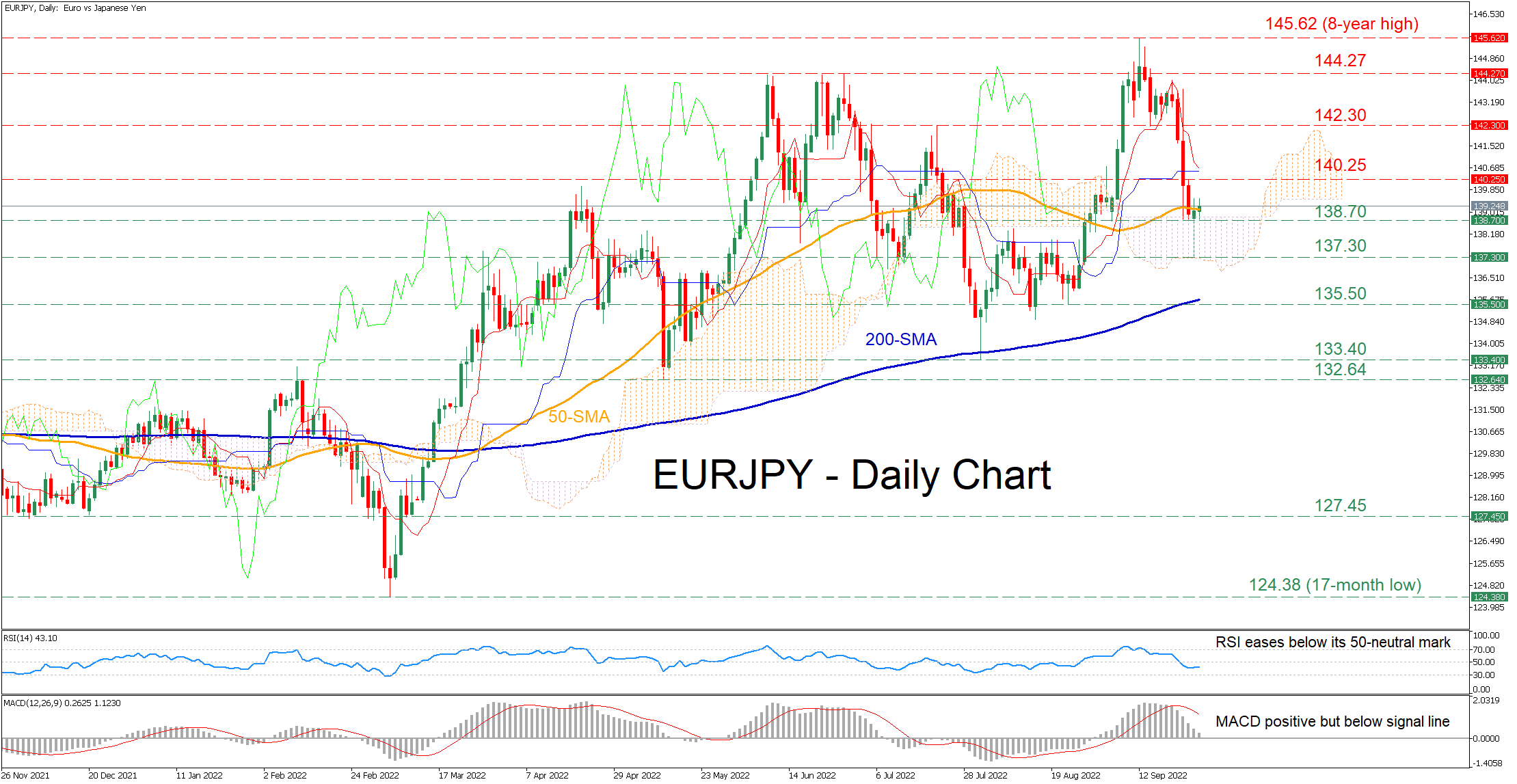