The GBP/USD pair extended its sharp retracement slide from two-week tops and witnessed some heavy selling for the second consecutive session on Wednesday. The downward momentum was sponsored by a combination of factors and dragged the pair to a one-week low level of 1.3724. The UK's medical regulator on Wednesday issued a temporary ban on the AstraZeneca vaccine for the below 30 age group. This could effectively delay the government's plan to reopen the economy, which, in turn, was seen as a key factor weighing on the British pound.

Adding to this, some cross-driven weakness stemming from a strong follow-through rally in the EUR/GBP pair and technical selling below the 1.3800 mark aggravated the intraday bearish pressure. On the economic data front, the UK Services PMI was revised down to 56.3 for March from the 56.8 estimated previous and did little to impress bullish traders or lend any support to the major.

On the other hand, the US dollar found some support from rebounding US Treasury bond yields and staged a modest bounce from over two-week lows. This was seen as another factor that contributed to the pair's overnight decline. The FOMC March meeting minutes released on Wednesday confirmed that the Fed will keep interest rates low until the US economy makes a more secure recovery. Investors, however, seem convinced that a stronger economic recovery would force the Fed to raise interest rates sooner than anticipated and pushed the US bond yields higher.

That said, the underlying bullish tone in the financial markets capped the upside for the safe-haven USD and assisted the pair to regain positive traction during the Asian session on Thursday. The upside, however, seems limited amid the upbeat outlook for the US economy. This, along with a fresh leg up in the US bond yields, should continue to underpin the greenback and keep a lid on any meaningful gains for the major. Hence, subsequent move up might still be seen as a selling opportunity and runs the risk of fizzling out rather quickly.

Market participants now look forward to the release of UK Construction PMI for some impetus. The US economic docket features the release of Initial Weekly Jobless Claims. This, along with the US bond yields and the broader market risk sentiment, might influence the USD price dynamics and produce some trading opportunities around the major. The key focus, however, will remain on Fed Chair Jerome Powell's scheduled speech later during the US session.

From a technical perspective, the emergence of some heavy selling at higher levels favours might have shifted the near-term bias back in favour of bearish traders. That said, it will still be prudent to wait for sustained weakness below the 1.3700 mark before positioning for any further depreciating move. The pair might then turn vulnerable to accelerate the slide back towards multi-week lows, around the 1.3670 region. The mentioned area coincides with 100-day SMA, which if broken decisively should pave the way for an extension of the downward trajectory.

On the flip side, a two-week-old ascending trend-line support breakpoint, around the 1.3785-90 region, now seems to act as an immediate resistance ahead of 100-hour SMA near the 1.3830 region. Some follow-through buying beyond mid-1.3800s could provide an additional boost to the major, though is likely to remain capped near the 1.3900 round-figure mark. 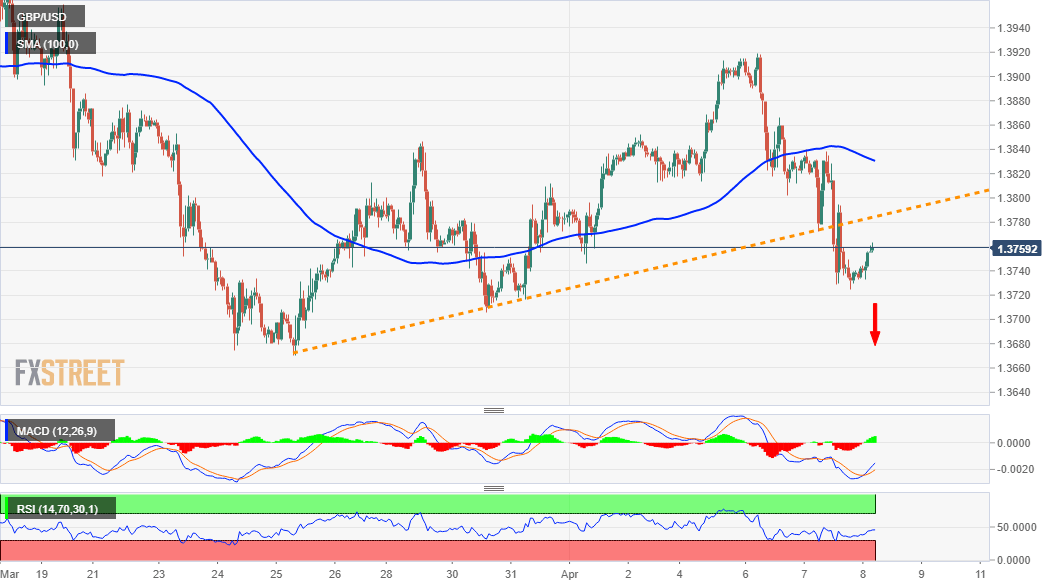