Having witnessed some extreme volatility since the beginning of this week, the GBP/USD pair now seems to have stabilized a bit and has been oscillating in a narrow trading band over the past 12-hours or so. The pair remained well below nine-month tops set on Wednesday despite the fact that the UK PM Theresa May, after suffering two key defeats this week, finally got a win on Thursday, wherein the parliament voted to pass the motion to request the EU for a delay of the looming Brexit deadline on March 29.

The lawmakers approved a short delay until June 30 if a deal is approved by March 20, which means we're headed for yet another meaningful vote next Wednesday. The key focal point for GBP traders will be on whether May will be able to gather enough support for the meaningful vote this time around. If not, a longer extension will further prolong Brexit uncertainties and trigger some choppy trading in the Sterling.

But unless we get more clarity on the matter, the pair seems more likely to swing around within a broader trading range, though a sustained break below the 1.3200 handle might accelerate the slide further towards the 1.3165-60 support area. A subsequent weakness might negate prospects for further near-term up-move and drag the pair back towards testing the 1.3100 round figure mark en-route the 1.3070 horizontal level. On the flip side, the 1.3300 handle now becomes an immediate strong hurdle, which if conquered might push the pair back towards challenging multi-month tops, around the 1.3380 region.

Looking at a slightly broader picture, the pair now seems to be forming a bearish rising wedge chart pattern, though will be confirmed only after a sustained break below a confluence region near the 1.30 psychological mark - comprising of the very important 200-day SMA and pattern support. 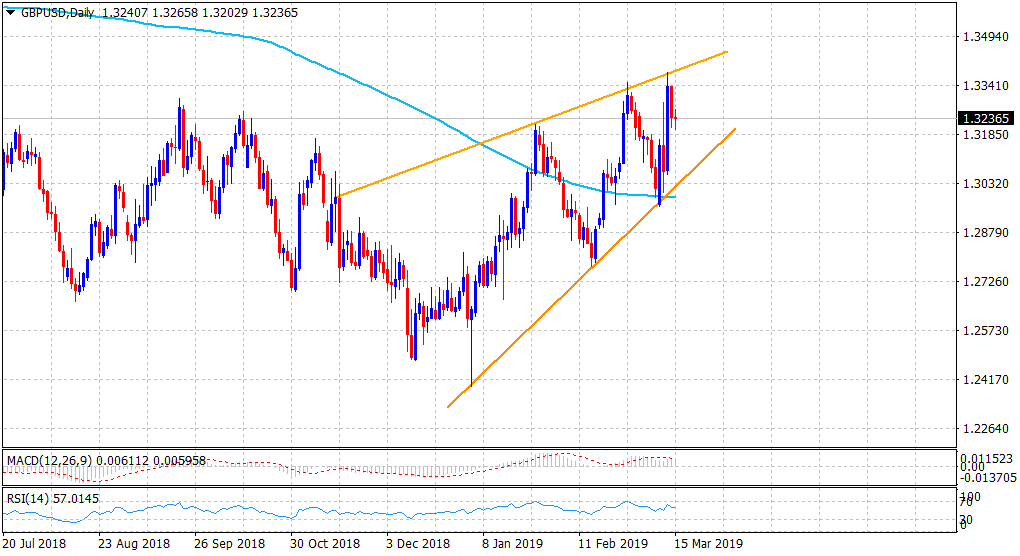