The GBP/USD pair gained some positive traction for the fourth consecutive session on Thursday, albeit lacked any strong follow-through buying. The US dollar remained on the defensive through the early European session amid mixed signals on US inflation. This, in turn, was seen as a key factor that extended some support to the major. The Fed Chair Jerome Powell said on Tuesday that inflation is rising due to pent-up demand and supply bottlenecks and that the price pressures should ease on their own. Separately, Atlanta Fed President Raphael Bostic and Fed Governor Michelle Bowman said that the high inflation in the US would last longer than expected, though agreed that the price increase will prove temporary.

On the other hand, the British pound was supported by Wednesday's UK PMI prints, which reaffirmed the positive outlook for the economic recovery from the pandemic. In fact, June saw another strong growth in output across the UK private sector and the overall expansion was only slightly lower than the record posted in May. That said, concerns about the EU-UK stand-off on the Northern Ireland protocol and a jump in the Delta Plus covid cases in the UK acted as a headwind for the sterling. The pair, so far, remained below the key 1.4000 psychological mark, or one-week tops set in the previous session. Investors also seemed reluctant to place aggressive bets, rather preferred to wait on the sidelines ahead of the Bank of England.

The BoE is scheduled to announce its monetary policy decision during the European session and is widely expected to leave its monetary policy settings unchanged. Hence, the key focus will be on whether the central bank warns about the latest increase in UK inflation and hint towards the possibility for an earlier than expected policy tightening. That said, policymakers would wait to see how sustainable the pickup in prices is. Moreover, the June policy meeting will not be accompanied by fresh economic projections or a press conference, suggesting that the pair might be susceptible to status-quo BoE.

Apart from this, a slew of important US macro data might also provide some trading impetus later during the early North American session. The US economic docket highlights the release of the final Q1 GDP print, Durable Goods Orders, the usual Initial Weekly Jobless Claims and Goods Trade Balance figures for May. This, along with the US bond yields and a scheduled speech by New York Fed President John Williams, will influence the USD price dynamics.

From a technical perspective, this week’s strong move up stalled near the 50% Fibonacci level of the recent corrective slide from multi-year tops. This is followed by the 50-day SMA, around the 1.4035 region, which if cleared decisively will negate any near-term negative bias. The pair might then surpass the 61.8% Fibo. level, around the 1.4070 region and aim to reclaim the 1.4100 round-figure mark.

On the flip side, any meaningful pullback below the 1.3940 horizontal support might attract some buying near the 23.6% Fibo. level, around the 1.3900 mark. A convincing break below will be seen as a fresh trigger for bearish traders and turn the pair vulnerable to resume its prior depreciating move witnessed over the past three weeks or so. The next relevant support is pegged near the 1.3865 region before the pair eventually drops to the 1.3800 mark en-route weekly swing lows, around the 1.3785 region. 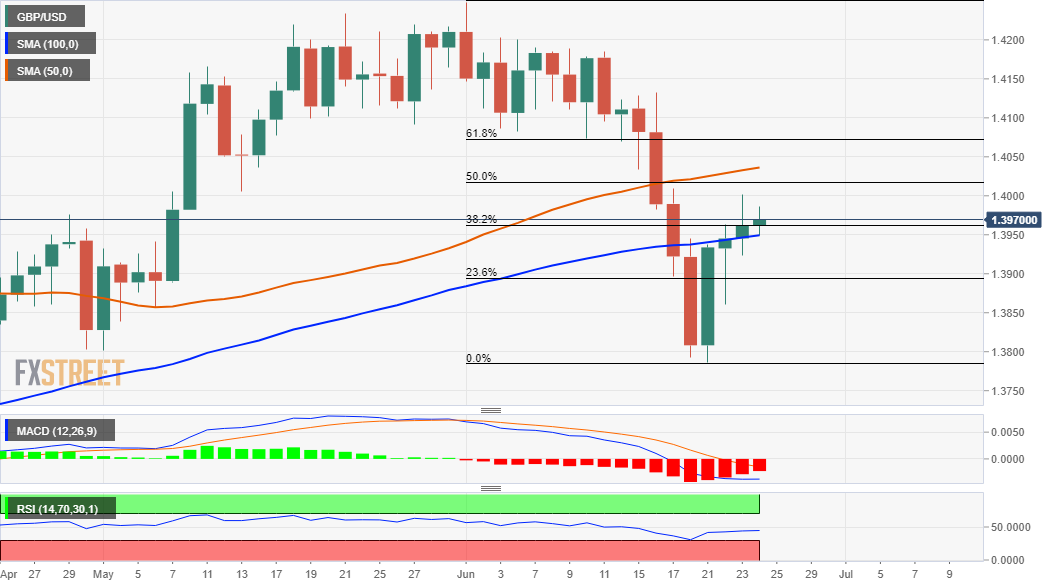