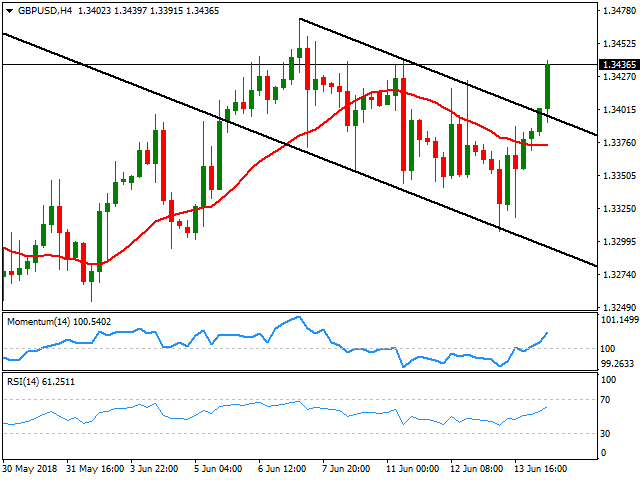 The GBP/USD pair advanced to 1.3410  early Europe and on dollar's weakness but retreated from the level ahead of UK data, holding anyway nearby. Beyond Fed's monetary policy announcement, news late Wednesday showed that UK PM May won in the House of Lords as several amendments proposed by the Lords were reverted. Jeremy Corbyn, Labour leader, suffered a major setback after six of his MPs resigned from their frontbench roles, over a Brexit vote on remaining in the European Economic Area. May's victory is clearly heading into a harder Brexit, but Pound bulls seem unaffected so far.

UK Retail Sales beat expectations, more than doubling market's expectations monthly basis, as the core reading, excluding fuel, came in at 1.3%, vs. the 0.3% expected. The YoY reading was also much better-than-expected up 4.4% against a forecasted 2.5% advance and a previously revised 1.4%. Growth was seen across all sectors, according to the official report, supported by a sustained period of good weather. The positive surprise sent the pair up to the current 1.3430/40 region, stalling 1 pip below the weekly high set Monday.

The US will also release May Retail Sales later today but seems unlikely the numbers would impress enough to trigger dollar's demand. Ahead of the event, the pair is bullish, as it broke the roof of a daily descendant channel, and even completed a pullback to it before resuming its advance. In the 4 hours chart, the price is well above a still directionless 20 SMA, while technical indicators head sharply higher above their midlines, reaching fresh almost 2-week highs. The key now is 1.3471 June 7th daily high, with the upward momentum probably accelerating on a break above it.