The GBP/USD pair remained under some heavy selling pressure on Wednesday and tumbled to three-month lows, weighed down by a combination of negative forces. Concerns about global economic growth reemerged following the disappointing release of Chinese macro data on Wednesday and were evident from a sharp intraday slump in government bond yields, which benefitted the US Dollar's relative safe-haven status and exerted some downward pressure on the major. The British Pound was further pressurized by negative Brexit headlines, wherein a spokesman for the opposition Labour party confirmed that gaps remained between the Labour Party and the government in Brexit talks.

The bearish pressure remained unabated despite weaker than expected US macro data - monthly retail sales figures and industrial production data. However, an intraday turnaround in the global risk sentiment, triggered by media reports that the Trump administration plans to delay a decision on new car tariffs for up to six months, extended some support and helped limit further losses. The pair finally settled just a few pips above session lows and now seems to have entered a bearish consolidation phase during the Asian session on Thursday.

In absence of any relevant market moving economic data from the UK, the incoming Brexit-related headlines might continue to influence sentiment surrounding the British Pound. Later during the early North-American session, some second-tier US economic releases - housing market data, the usual initial weekly jobless claims and the Philly Fed Manufacturing Index, might further collaborate towards producing some short-term trading opportunities.

From a technical perspective, the pair's inability to defend the very important 200-day SMA and a subsequent slide below the 1.2900 mark clearly points to persistent bearish pressure. The mentioned handle nears a support marked by 50% Fibonacci retracement level of the 1.2396-1.3381 up-move and bearish acceptance below the same sets the stage for a further decline towards testing the 1.2800 handle en-route 61.8% Fibonacci retracement level support near the 1.2775-70 region. On the flip side, attempted bounces might now attract some fresh selling near the 1.2885-1.2900 area and any subsequent move seems more likely to remain capped near the 1.2950-55 region (200-DMA). 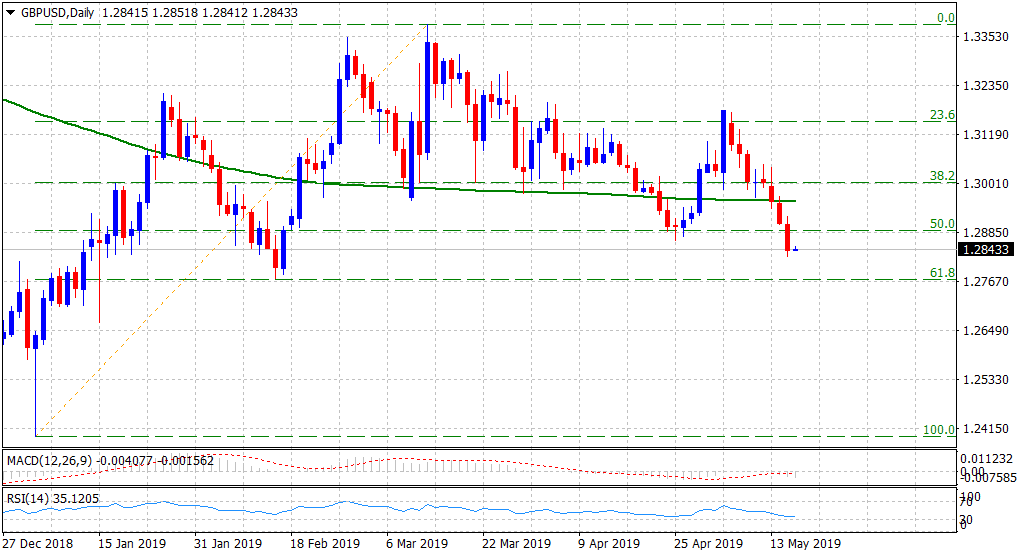