The GBP/USD pair gained some positive traction on Friday and built on the previous session's goodish bounce from 4-1/2 month lows, touched in wake of the recent UK political chaos. The initial leg of recovery was supported by mostly upbeat UK retail sales data for April and got an additional boost after the UK PM Theresa May finally announced that she will be stepping down as Conservative Party leader on June 7th. It is worth reporting that May had been under immense pressure amid disagreements on her revised Withdrawal Agreement Bill and the move now paves the way for a new PM probably in July.

Apart from the latest UK political development, the positive momentum was further supported by a modest US Dollar pullback from levels beyond the 98.00 handle - roughly two-year high. Against the backdrop of a free fall in the US Treasury bond yields, the disappointing release of US durable goods orders continued exerting some downward pressure on the greenback and pushed the pair back above the 1.2700 round figure mark. The recover extended through the Asian session on Monday as investors cheered the early news that the Brexit Party received the highest number of votes in the European Union (EU) elections.

However, given the fact that a pro-Brexit hardliner Boris Johnson is the leading candidate and is gathering momentum to replace May, the optimism is likely to fizzle out rather quickly amid concerns about a no-deal spilt Hence, it would be prudent to wait for a strong follow-through buying before confirming that the pair might have actually bottomed out in the near-term. Both the UK and the US markets will remain closed on Monday and hence, any incoming Brexit-related news/development might turn out to be an exclusive driver of the pair's momentum.

From a technical perspective, any subsequent up-move seems more likely to confront some fresh supply near the 1.2770-80 region and remain capped below at an important horizontal support break-point, now turned resistance near the 1.2800 round figure mark. On the flip side, the 1.2700 round figure mark now becomes immediate support to defend and is followed by the 1.2650 region, which if broken decisively might turn the pair vulnerable to break below the 1.2600 handle and aim towards challenging the key 1.2500 psychological mark in the near-term. 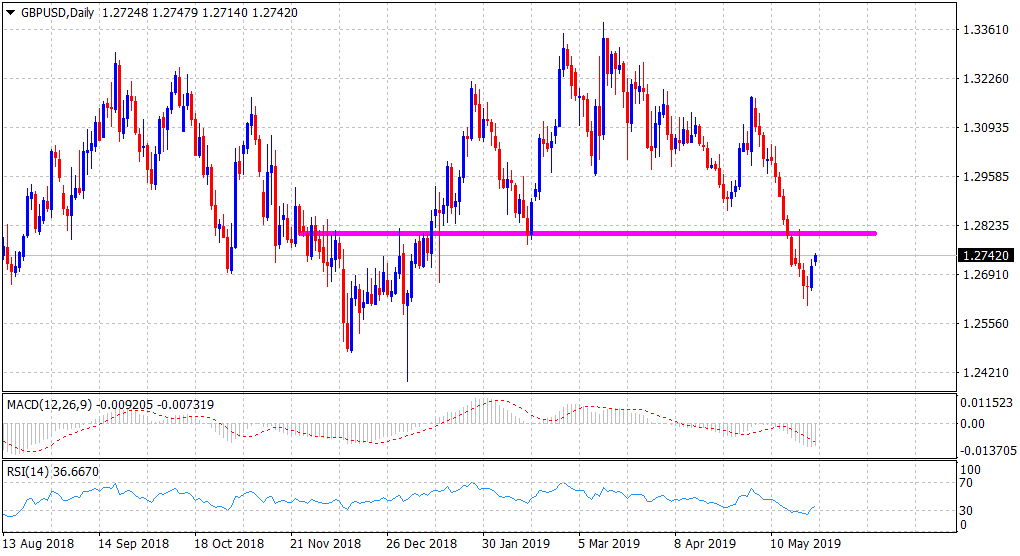