The GBP/USD pair traded with a mild positive bias for the fourth consecutive session on Tuesday and was seen hovering near the highest level in almost three years during the Asian session. The British pound remained well supported by the UK government's plan to ease lockdown measures and the impressive pace of COVID-19 vaccinations in Britain. In fact, UK Prime Minister Boris Johnson unveiled a new four-step plan to end restrictions by 21 June and lifted hopes for a swift UK economic recovery. This, in turn, underpinned the British pound, which, along with the prevalent US dollar selling, remained supportive of the pair's positive move.

The USD languished near six-week lows amid the underlying bullish sentiment in the financial markets and failed to gain any respite from the continuous upsurge in the US Treasury bond yields. The prospects for the passage of US President Joe Biden's proposed $1.9 trillion stimulus package has been fueling the reflation trade. The House Budget Committee on Monday voted to advance the Democrats' massive coronavirus relief plan and is on course to get a floor vote later this week. This, in turn, pushed the yield on the benchmark 10-year US government bond to fresh one-year tops, albeit did little to impress the USD bulls.

Market participants now look forward to the UK economic docket, highlighting the release of monthly employment details for a fresh impetus. The ILO unemployment rate for the three months to December is expected to have edged higher from 5.0% to 5.1%. Meanwhile, the number of unemployed people are anticipated to have risen by 35K in January as against 7K reported in the previous month. Later during the early North American session, the Conference Board's US Consumer Confidence Index will influence the USD and also produce some trading opportunities. The key focus, however, will be on Fed Chair Jerome Powell's testimony before the Senate Banking Committee.

From a technical perspective, the pair, for now, seems to have paused near the top boundary of the monthly ascending trend-channel. Slightly overbought RSI on the daily chart seemed to be the only factor holding bulls from placing fresh bets. Hence, it will be prudent to wait for some near-term consolidation or a modest pullback from the current resistance zone before positioning for any further appreciating move. That said, a sustained breakthrough will be seen as a fresh trigger for bullish traders and pave the way for additional gains. The pair might then surpass the 1.4100 mark and aim to test the next relevant hurdle near the 1.4140 region.

On the flip side, immediate support is pegged near the 1.4030 region ahead of the key 1.4000 psychological mark. Any subsequent slide is more likely to attract some dip-buying near the 1.3960 horizontal support. This, in turn, should help limit the downside near the trend-channel support, currently around the 1.3925-20 region. The latter should act as a strong base for the major, which if broken decisively might prompt some aggressive long-unwinding trade and pave the way for some meaningful corrective slide in the near-term. 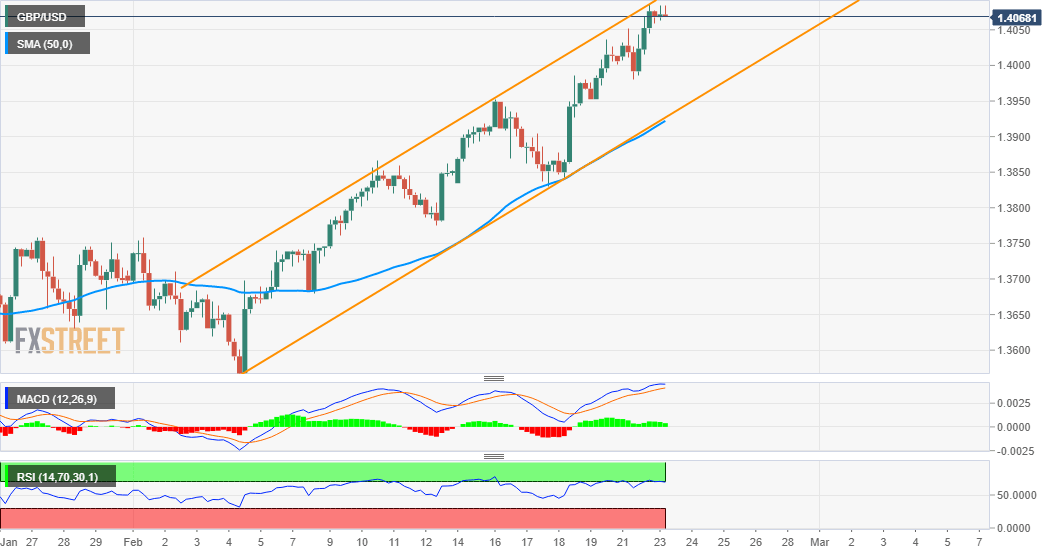