The GBP/USD pair struggled to capitalize on it intraday positive move on Thursday and once again started retreating from the vicinity of the 1.3400 mark. The early uptick to the highest level since early September ran out of the steam after British Finance Minister Rishi Sunak said that the UK should not be stretching for a Brexit deal at any cost. This comes on the back of comments by the European Commission Ursula van der Leyden's comments that the bloc was ready for the possibility of Britain leaving the EU without a new trade accord. With just five weeks left until the end of the transition period on December 31, both sides have been struggling to find a compromise on key sticking points – level playing field, fisheries and state-aid rules. This, in turn, took its toll on the British pound and prompted some intraday selling around the major.

However, persistent US dollar selling bias extended some support, rather assisted the pair to attract some dip-buying near the 1.3320 region. The optimism over coronavirus vaccines continued undermining the safe-haven USD, which was further pressured by Wednesday's rather unimpressive US macro data. The unexpected jump in the US Initial Weekly Jobless Claims added to market worries about the economic fallout from new COVID-19 restrictions and raised expectation for more fiscal stimulus from the incoming Biden administration. This, along with holiday-thinned liquidity conditions, held investors from placing aggressive bets and helped limit the downside. The US markets were closed on Thursday in observance of Thanksgiving Day. Nevertheless, the pair recovered around 35 pips from daily lows and regained positive traction during the Asian session on Friday.

In the absence of any major market-moving economic releases, either from the UK or the US, the incoming Brexit-related headlines will continue to drive the British pound. Apart from this, the broader market risk sentiment will influence the USD price dynamics and further contribute to produce some meaningful trading opportunities on the last day of the week.

From a technical perspective, nothing seems to have changed much for the pair and traders are likely to wait for a sustained breakthrough a three-day-old trading range before placing fresh directional bets. Bulls might continue to face stiff resistance near the 1.3400 mark, representing the top boundary of a two-month-old ascending channel. A convincing breakthrough should now pave the way for a move towards September monthly swing highs, around the 1.3480 region, en-route the key 1.3500 psychological mark.

On the flip side, any pullback might continue to attract some dip-buying and remain limited near the 1.3300 mark. A subsequent fall has the potential to drag the pair further towards the 1.3260 horizontal support. Failure to defend the mentioned support levels might now turn the pair vulnerable to slide further towards the 1.3200 area. The corrective slide could further get extended to the 1.3160 region before the pair eventually drops to test the next major support near the 1.3110-05 zone. 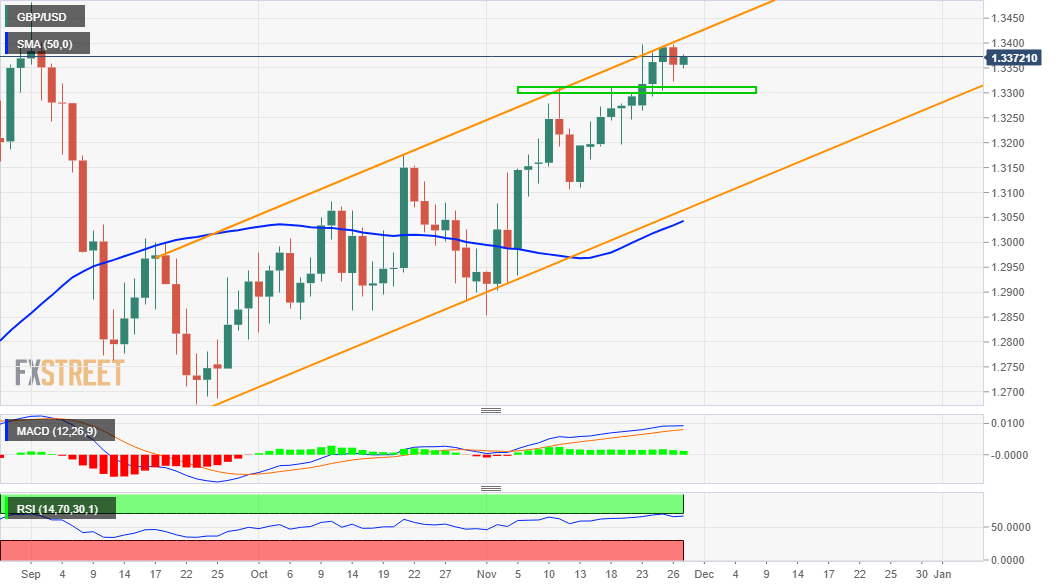