Skip to main content
TRENDING: EURUSD| GBPUSD| AUDUSD| USDCAD| XAUUSD
TRENDING: EURUSD| GBPUSD| AUDUSD| USDCAD| XAUUSD
;
The ECB announces its interest rate decision on Thursday 5th December 2013 at 1245 GMT/ 0745 ET. The market expects no change in policy after last month’s interest rate cut, so the focus is likely to be on President Draghi when he holds his press conference at 1330 GMT/ 0830 ET.

This is an important meeting as the ECB staff economic forecasts will be released for growth and inflation at this meeting. The market expects the ECB to revise up its growth forecast for next year to 1.5% by mid-2014, but we believe that the inflation forecast will be of more interest. This will be the first time that the Bank will extend its inflation forecast out to 2015, and if it shows little upward momentum in prices then it may reinforce the ECB’s dovish forward guidance to keep policy lose for the long-term, which could be EUR negative.

Taking into account sluggish growth and the very low rate of inflation (currently annual headline inflation is 0.9%, well below the ECB’s preferred rate of close to 2%); the ECB staff forecasts could estimate inflation to remain well below 1.5% into 2015. Added to this, credit growth plunged by 3.1% in October right before the ECB rate cut, which may trigger questions to Draghi about what steps the ECB could take next if it deemed more policy support is needed.

What can the ECB do?

While we expect the ECB to keep its powder dry at this meeting (just in case the inflation outlook deteriorates even further), In recent weeks some ECB members have touted the possibility of QE, more LTRO and a potential cut to the deposit rate to spur bank lending to the real economy. From a markets perspective, the most dovish outcome could be if Draghi hints at QE or a negative deposit ratio. However, we believe that it is unlikely that he will commit to such radical easing action at this meeting. Instead he may refer to a potential new LTRO that was referred to recently by the head of the Bundesbank, which would encourage banks to lend directly to the real economy rather than buying up government bonds.

So what does this mean for the EURUSD?

We have been concerned that this pair is defying gravity for some time. EURUSD has successfully managed to diverge from its yield spread since early November, and even though the German/ US yield differential has been USD positive, EURUSD managed to climb from sub 1.33 lows on 7th November to a high above 1.36 in recent days.

It’s not only the fundamental factors that could be EUR negative, from a technical perspective the failure to get above 1.3620 –the high form 29th November, suggests an unwillingness in the market push this pair higher. Added to this, the failure of the bulls to push this pair back above 1.3700 – the top of the daily Ichimoku cloud – was an ominous sign that suggested the bulls were not committed to this up-move. On the back of the fundamental points noted above, a break below 1.3540- the Tenkan line on the daily cloud may open the way to further weakness. Key support levels to watch over the next 24 hours include: 1.3470 – the base of the daily cloud, below here is a bearish development, then 1.3440 –the 100-day sma. 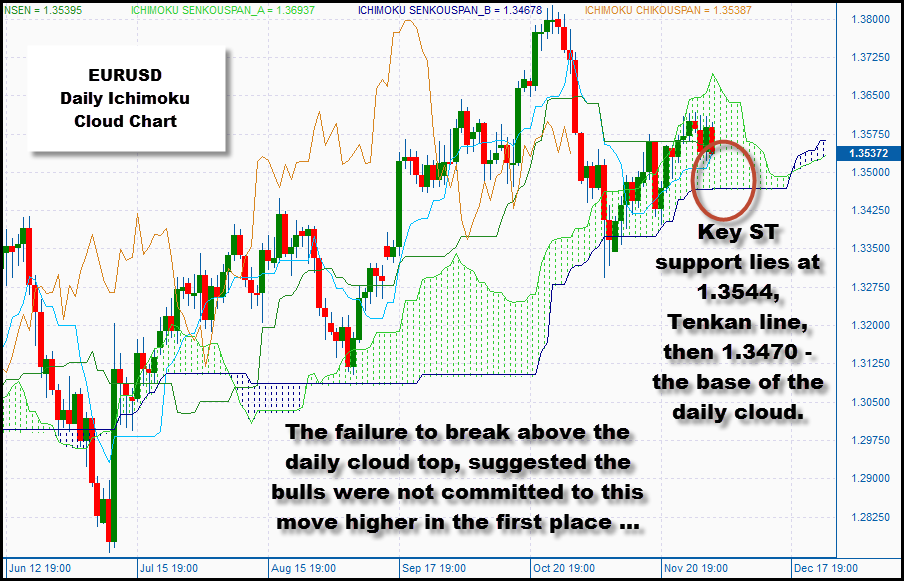 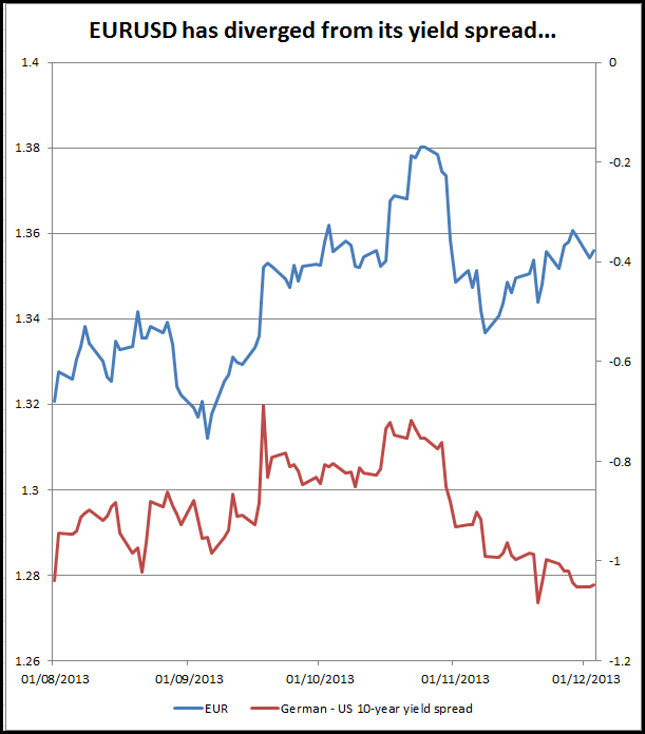