Gold continues to trade close to its lowest level for 3 years, although it is in recovery mode today, attempts to get above $1,260 have been futile in the last few sessions. While $1,200 appears to be decent support for now, there is a nagging fundamental concern that continues to keep me nervous about the outlook for gold: inflation expectations in the US.

There are two charts that are worth watching: The University of Michigan/Thomson Reuters measure of consumer inflation expectations for the year ahead, which fell further last month and are close to its lowest level in 11 months. Added to this, the Federal Reserve Bank of Atlanta’s 5-year deflation probabilities report from last week may have ticked down from 13% to 12%, but it remains close to its lowest levels since November 2012, before the rallies started in the stock market and in the USD.

One of the key drivers of gold is its status as an inflation hedge, thus, this data further erodes the attractiveness of the yellow metal.

So what’s new about falling inflation?

But what is new about falling prices in the US? CPI inflation has been falling steadily after reaching a high of 3.9% in late 2011. Since February, US CPI has been below the Federal Reserve’s 2% target rate. Likewise, consumer inflation expectations have been heading south since peaking in May 2011.

However, in the last few weeks something new has happened: Treasury yields have risen at their fastest pace since 1987 and the 10-year yield is close to 2.7%, while the 30-year mortgage rate is at 4.7%, both the highest levels for nearly 2 years. Added to this, the Fed may start tapering its QE3 programme as early as September, which could keep upward pressure on interest rates in the medium-term.

Rising rates tends to keep the consumer subdued, which could keep inflation expectations under wraps for some time; it could also keep the probability of deflation firmly on the horizon.

This keeps us sceptical on any recovery in the gold price in the near term and why we think that a move higher could be met with a wall of selling pressure. 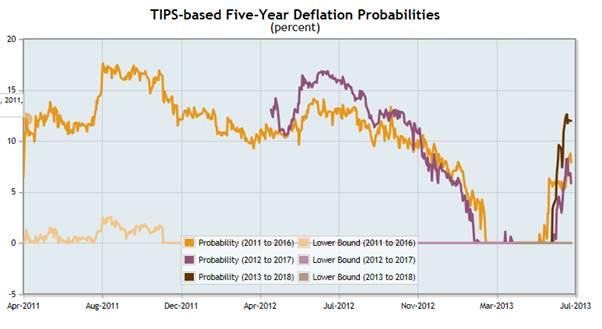