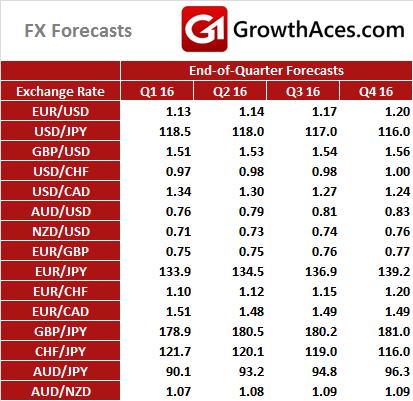 In our opinion the EUR/USD will rise next year. We expect stronger recovery in the EUR/USD in the first quarter of 2016, as in our opinion the Fed next hike will take place later (in April) than current market consensus (March). However, the pace of Fed monetary tightening could be higher in the second half of the year and we think that four rate hikes, as it is currently assumed by Fed policymakers, are possible next year.

The second half of 2016 should bring us better growth data and much higher inflation in the Eurozone. This may trigger discussion about ending the ECB QE programme. That is why we expect the EUR/USD to continue its rise despite interest rate hikes in the US.

British referendum on whether to remain in the European Union will be a cloud over the GBP in the coming year. A date has not been set for the UK referendum as UK Premier David Cameron struggles to obtain sufficient reforms to persuade the electorate to remain in the EU. He dropped a hint that Britain will hold its EUR referendum in 2016. The deadline is 2017, but there is growing expectation that there will be a vote in the second half of next year ahead of German and French elections in 2017.

We expect the GBP to recover slightly in the first months of 2016. In our opinion financial markets have gone too far in pushing BoE rate hikes out further into the future. We expect the BoE to follow the Fed in the mid-2016, which is much more hawkish forecast than the market consensus. Our forecast of GBP/USD rise is built on an expected shift in market expectations for BoE moves.

We expect slightly stronger yen in the coming year. After recent fine-tuning of the BOJ policy, we do not anticipate further easing steps in Japan.

The BOJ has pushed back the timing of achieving its 2% price target a few times since it launched the massive stimulus programme in 2013 because of weak oil prices. The central bank initially aimed to reach the target in roughly two years but it now expects the target will be met in the second half of fiscal 2016.

Japan's economy dodged recession in the third quarter with the initial estimate of a contraction revised to an annualised expansion of 1.0%. This suggests that Japanese economy is in better shape than initially thought. We expect Japan’s growth to recover further, which should support the JPY.

In our opinion the CHF will be the weakest currency among major currencies in 2016.

The Swiss National Bank reiterated that the CHF is strongly overvalued and the bank is ready to intervene in the currency market if necessary to weaken the franc. SNB Chairman Thomas Jordan said the SNB had no limit on how much it could grow its balance sheet in order to weaken Switzerland's currency. He said: “We do not rule out another rate cut.”

The SNB said that the differential between ECB and SNB rates is an important factor in making the franc less attractive but the bank must balance that by not inflicting too great a burden on savers and investors.

Switzerland's export-reliant economy has avoided an anticipated recession in this year but stagnated in the third quarter due to the franc's fall. In our opinion Swiss economy will not recover without significant depreciation of its currency. A further rate cut by the SNB is not our baseline scenario, but even current rate level makes the CHF attractive funding currency for carry trade.

We expect oil and other commodities prices to recover in the coming year, following anticipated rise in activity in global economy. This should support currencies strongly correlated with commodity prices: CAD, AUD, NZD.

We do not expect further monetary easing by the BOC, the RBA and the RBNZ. What is more, inflation in these economies is relatively high (compared to the UK, the Eurozone or Japan) and a rise in commodity prices may trigger the discussion about interest rates hikes much earlier than it is currently anticipated.

In our opinion short USD/CAD trade could be the best performing trade in 2016. We expect the USD/CAD to fall to 1.24 at the end of 2016. The AUD/USD is expected to rise to 0.83 and the NZD/USD to 0.76. We forecast also a recovery in pacific crosses: AUD/NZD and AUD/JPY.

Thank you for the great year of 2015! We wish you Happy New Year! Let your trades be more profitable with us!