Skip to main content
;
Going into 2016, we've been gathering all kinds of feedback from our top in-house experts and contributors on what this new year may bring to the markets. We've published forecast articles on major FX pairs and central banks, we broadcasted a 1-hour show previewing the year and we interviewed ten of our top contributors. We still were missing a bigger picture on what the market expects, so we did a survey asking all of our contributing experts to briefly predict some trends and prices on currencies and commodities as well as developing macroeconomic events.

We got 48 answers and here we present the results of the first part of this survey, which was about predicting the best and worst performing major FX pairs and the first semester prices of the most traded assets in the markets.

Which of these currencies do you expect to perform the best against the USD in 2016? And the worst? 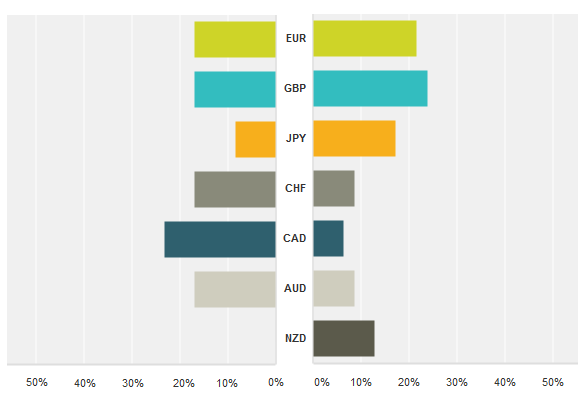 This two-way chart allows us to show the bull/bear side of how the main currencies may perform against the US Dollar during 2016. At the right side you can view the amount of contributors predicting each currency to be the best performing of the list against the USD, while at the left side the worst-performers votes are represented.

The chart shows some interesting trends, as the slightly more bullish than bearish result in the EUR (10 bulls, 8 bears) and the GBP (11 bulls, 8 bears), which is kind of odd if we consider the price predictions we will read later, specially in the British Pound. The JPY (8 bulls, 4 bears) and the NZD (6 bulls, 0 bears) are the currencies more clearly bullish (yes, no one thinks the kiwi will be the worst performer in 2016), while the CHF (4 bulls, 8 bears), the AUD (also 4 and 8) and specially the CAD (3 bulls, 11 bears) are notably bearish.


Which price do you foresee for the EURUSD at the end of the first semester of 2016? 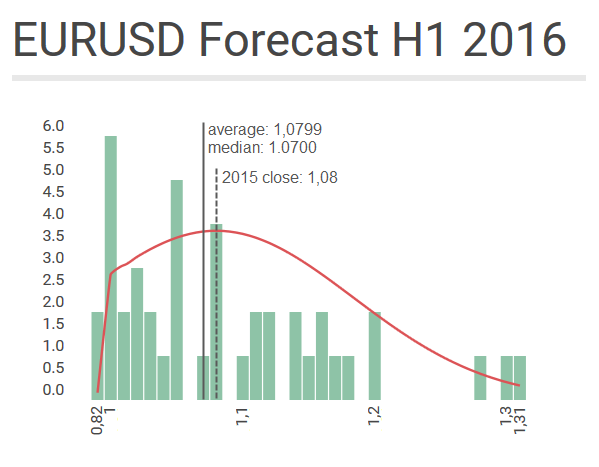 EURUSD closed the year around 1.08 and the average forecast from our contributors is placed just a pip short of that level, at 1.0799, meaning that the bulls/bears are split 50-50. It's interesting to notice, looking at the histogram, that the mode of predictions is located around parity, with most of the bears constrained in a quite tight range (1.00-1.05). On the opposite side, the bulls are quite spread going from 1.10 to 1.31.


Which price do you foresee for the GBPUSD at the end of the first semester of 2016? 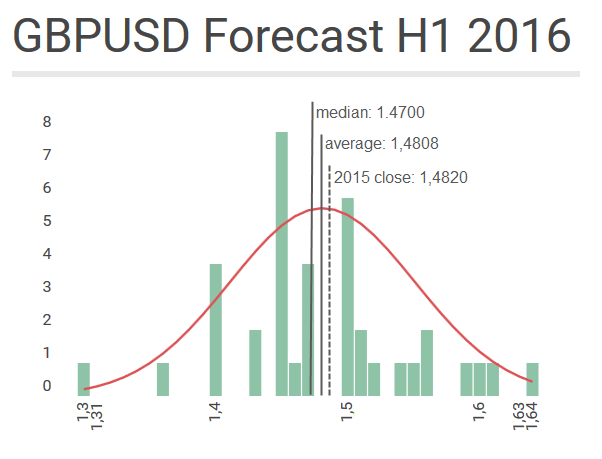 Regarding the cable, the answers of our contributors show a slight bearish bias. The average forecast is placed in 1.4808, a few pips below the 2015 close. Again, it's interesting to notice that the mode (1.45) is located far from the average and the lowest forecast (1.3) is more far than the highest (1.64), which may reinforce the bearish bias observed.


Which price do you foresee for the USDJPY at the end of the first semester of 2016? 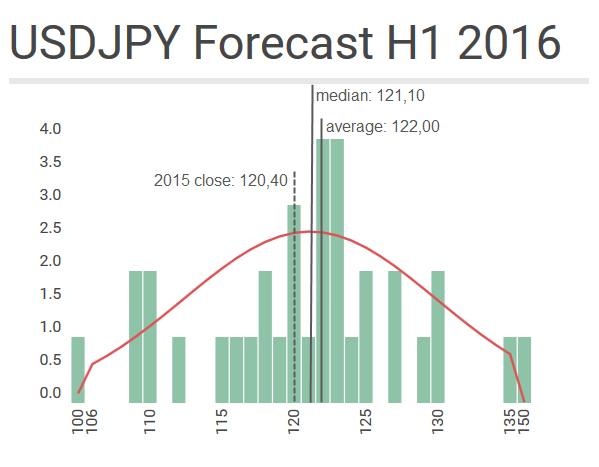 Our contributors are on average bullish on the USDJPY. The average forecast is at 122.00, clearly over the 120.40 where the pair closed last year. It is noticeable the symmetric distribution of the histogram here, with 122-123 acting as the mode and similar spreads on both sides. Both the lowest (100) and the highest (150) are quite extreme but similarly spread from the average. Therefore, with the latter being clearly over the close, we can settle for a bullish bias on this one.


Which price do you foresee for Gold at the end of the first semester of 2016? 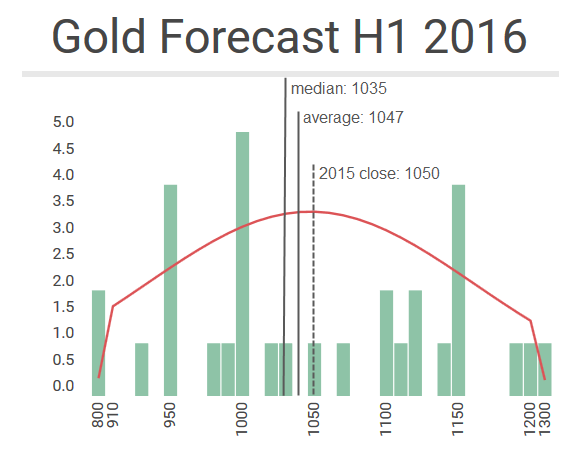 This is an interesting histogram, as there are significant levels all over the chart. At first glance, we observe the average (1047) really close to the last price of 2015 (1050), but there are only three contributors predicting the gold price to be between 1030 and 1070 at the end of the first semester. The mode is located quite below, at the round price of 1000, but there are also significant accumulations of forecasts around 950, 1100 and 1150. Therefore, we can infer that gold price will be an asset tough to predict going forward, with bulls and bears quite convinced they can take the price to their side but eventually could cancel each other.


Which price do you foresee for the WTI Oil barrel at the end of the first semester of 2016? 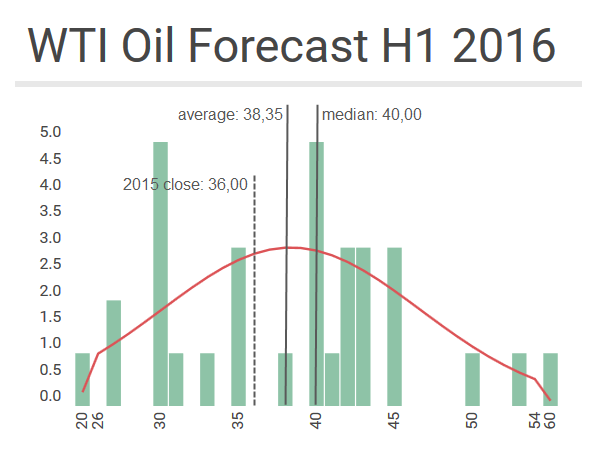 It's kind of surprising to look at this histogram just when oil is occupying headlines with its recent 12-year lows, but our contributors are actually bullish on average. The WTI barrel closed the year at 36$ and the average forecast for the first half of 2016 is at 38.35$. There are two modes, one at 30$ and another at 40$, but the second one has a significant amount of observations around, with 15 of the 33 predictions (a considerable 45%) stuck in the 40$-45$ range.


Which price do you foresee for the DJIA at the end of the first semester of 2016? 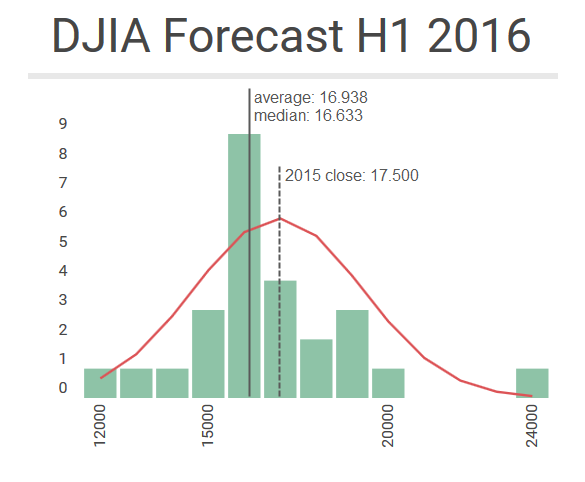 We also got a bonus question on a stocks index. Here we have a more predictable outcome. The DJIA forecasts are bearish on average but most of the observations are located around the 16000-18000 range, where the index closed 2015.

Click here to read the second part of the survey, about macroeconomic topics and trends.