The U.S. central bank has metastasized from an institution that was originally designed to assist distressed banks, to one that believes its purview now includes perpetuating asset bubbles, fighting global warming and reconciling racial inequities. Another distortion of the original purpose of the Fed is that its mandate has changed from providing stable prices and full employment, to creating an inflation rate above 2% for a period of time equivalent to the duration it was below that level.

But the members of the FOMC claim there is nothing to fear if inflation were to ever grow too hot because it has the tools to bring it under control. In other words, when necessary, the FOMC can not only stop QE but it can raise rates aggressively enough to vanquish inflation without destroying the markets and economy along the way. Let’s see just how true this contention really is.

But before we get to how “successful” the fed will be to tame inflation, a funny thing happened on the way to achieve its 2% goal. Our central bank focuses on the incredibly distorted core rate of inflation found in the Personal Consumption Expenditures Price Index. But meanwhile, prices are surging in the real world. For instance, headline PCE inflation increased by 3.65% year over year in April. And even in the fed's preferred metric, prices jumped by 3.1% y/y. Not only this, but a slightly less massaged reading of inflation, which can be found in the headline CPI metric, had prices rising by 4.2% y/y.

If you want an even more accurate view of the current rate of inflation just look at home prices, which are up 21% y/y, according to Redfin data. Also, the 19 commodities in the CRB Index have soared by over 60% in the past 12 months. Safe to say, the actual rate of inflation is already far above the Fed’s inane 2% target.

These absurd inflation rates were brought about by paying citizens $6 trillion between 3/20-3/21 to lay fallow at home and not produce goods and services. Hence, creating supply shortages; and a huge void to absorb the massive liquidity wave. Therefore, the rate of inflation has already climbed to a point that is dramatically destabilizing to the economy. This is the conundrum for our Treasury and Fed: keep printing money and cause inflation to run intractable, which will destroy the stock market and the economy. Or, stop monetizing debt and let the gravitational forces of deflation implode the gargantuan asset bubbles. Given the history of the Fed, it is clear Mr. Powell will soon try to once again convince investors that the U.S. economy has healed and it’s time to normalize monetary policy.

Most in government and on Wall Street claim that the Treasury can slowly and innocuously reduce its spending while the Fed gradually stops printing money. However, this is virtually impossible because of the massive amount of debt taken on since the start of the global pandemic and the mind-boggling level of asset prices--which are predicated on free and continuous money printing.

Twenty percent of the largest U.S. corporations are in the zombie category (meaning they don't earn enough money to even pay interest on outstanding debt). Those big businesses are carrying some $2.6 trillion in debt, according to Barron’s. Once the free-money spigot is turned off, massive bankruptcies will emerge. The asset bubbles in junk bonds, real estate and equities have been built on top of that risk-free-rate of zero percent. Take it away and the game ends in catastrophe.

History is clear regarding this dynamic. In the year 2000—the peak of the NASDAQ bubble--the Fed Funds Rate (FFR) was 6.5%. It was reduced to 1% by June 2003, in order to help ease the pain of the imploding stock market. But by June 2006, the Fed promised the crisis was over and had the FFR back to a lower high of 5.25%.

However, Mr. Bernanke had it all wrong. Bringing interest rates close to the average rate caused the housing market to crash. In the wake of the Great Financial Crisis, the FFR was taken to zero percent by December 2008—it was the first time in history that money became almost free.

Of course, the members of the FOMC are very slow learners. The Fed was once again assuring a weary consumer that the once in a hundred-year storm had passed, and the current Fed-Head Jerome Powell finished the job started by Janet Yellen when he took rates to another lower high of just 2.5% in 2018. Nevertheless, a crash in the equity market in the fall of 2018, plus a REPO market crisis in the summer of 2019 caused the Fed to cut rates three times, to 1.75% by October of that same year. Unsurprisingly, the global Pandemic eventually put the FFR back to zero percent, but it was already on its way there before the advent of COVID-19.

Money printing, debt accumulation and asset bubbles have become the fragile foundation for which this current economy is built. Therefore, the notion that the Fed can end its $120 billion per month QE program and gradually raise interest rates back anywhere close to the normal level of 5-6% is ridiculous. Indeed, it would be shocking if it could get rates close to the previous high of 2.5%--the new lower high on the FFR is probably below one percent given the massive increase in the number of insolvent companies and unsustainable level of equity valuations.

Forget about 2% core PCE inflation. Intractable inflation is acutely manifest in asset prices right now! However, the government and many businesses can only pretend to be solvent while borrowing costs are close to zero. Take the free money away and the whole system goes belly-up. 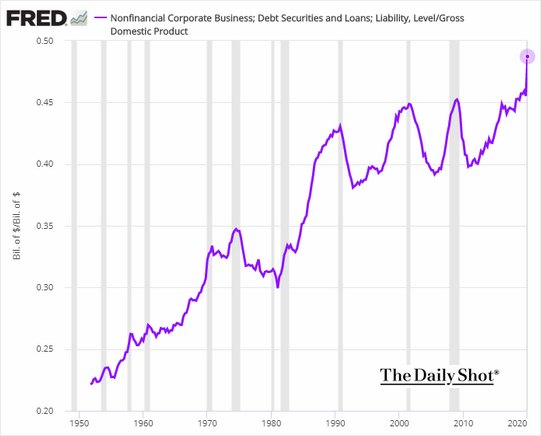 If the Fed couldn’t normalize rates before, how could it possibly come close to doing so now?

The truth is any real effort to tighten monetary policy back to the previous old high of 2.5% will cause the credit markets to freeze once again, which should cause a more intense market crash than the other previous attempts to normalize borrowing costs. Nevertheless, Mr. Powell will soon lead the average investor down this predictably perilous path toward perdition. The question is, what happens when consumers and investors reach the epiphany that the Fed’s tools for the purpose of taming inflation have now become broken?