The Fed meets on July 31 to make an interest rate policy decision. What should the Fed do?

Jim Bianco at Bianco Research says Only a Half-Point Rate Cut From the Fed Will Do.

"Anything less would fail to fix the imbalances in the global bond market, continuing to weigh on economic sentiment," says Bianco.

"By lowering its target for the federal funds rate by just a quarter point, the Fed risks no less than a recession. The Fed has a history of moving too slow to respond to evidence of weaker growth, and a bold move now would help ensure the economy achieves the rare soft landing.”

I stand corrected. With his charts, I concede that Bianco made a solid case for cuts.

Yet, his charts highlight something more important. 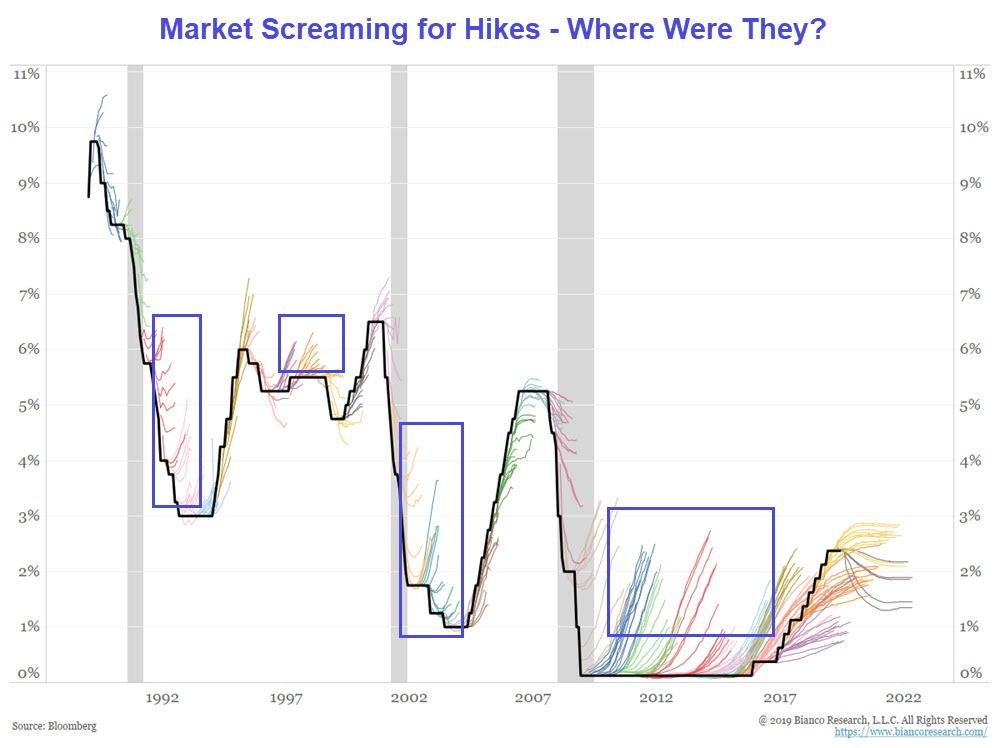 Chart courtesy of Bianco. The title and blue boxes are my anecdotes.

Bianco notes "In the 1990s the fed funds contracts only went out 6 months. That is why the lines are short. In the 2000s they went out a year, lines are a little longer. Around 2007 they started going out three years, the longest lines."

Each calendar years is a different color.

The market was screaming for hikes for five years.

The Fed did not deliver.

Too Low, Too Long

That the Fed did not deliver hikes as expected is part of its asymmetric policy of keeping interest rates too low, too long,

Without a doubt the Fed blew more bubbles, and likely the biggest in history.

The market responded with a prolonged yield-curve inversion.

Bianco is correct. The Fed is behind the curve.

And by his logic it's not clear that 50 basis points is enough of a cut.

But to what avail?

So What? Bubbles Already Blown

Let's return to Bianco's opening gambit: "Anything less would fail to fix the imbalances in the global bond market, continuing to weigh on economic sentiment."

The Fed, with its asymmetric too-low too-long policy blew bubbles that are impossible to fix.

Too Late for Insurance

Rate cuts now as economic insurance is like trying to buy insurance on your car after you wrecked it.

The bubbles have been blown.

Even if the Fed can correct current "imbalances" it cannot "unblow" bubbles anymore than it can unblow a horn.

Deflationary Bust Baked in the Cake

In the Fed's foolish attempt to stave off consumer price deflation, the Fed sowed the seeds of a very destructive set of asset bubbles in junk bonds, housing, and the stock market.

The widely discussed "everything bubble" is, in reality, a corporate junk bond bubble on steroids sponsored by the Fed.

The bottom line at this point is an economic recession is baked in the cake. The global economy is slowing and the US will not be immune.

The debt deflation horn has already sounded.It will not be unblown no matter how big the cut.

GBP/USD is trading above 1.30 after UK wage figures beat expectations with 3.2% annually. The unemployment rate remained at 3.8% in November.

EUR/USD is trading around 1.11 after the German ZEW Economic Sentiment beat with 26.7 points. Presidents Trump and Macron agreed not to slap tariffs on each others' countries.