The FOMC meets on June 13 - 14 concluding the two-day monetary policy meeting with a statement, followed by a press conference. The FOMC will also be publishing fresh quarterly forecasts.

Economists are broadly in agreement that the June rate hike of 25-basis points (bps) is a done deal. This would effectively bring the Fed's short-term interest rates to 1.0% - 1.25%. The rate hike will also be the fourth time the Fed will be raising interest rates.

While the above decision is almost a done deal, the question of what the Fed will do next will be of importance. The rate hike has already been priced in, with the 30-day Fed-funds futures closing at 98.965 as of Friday. 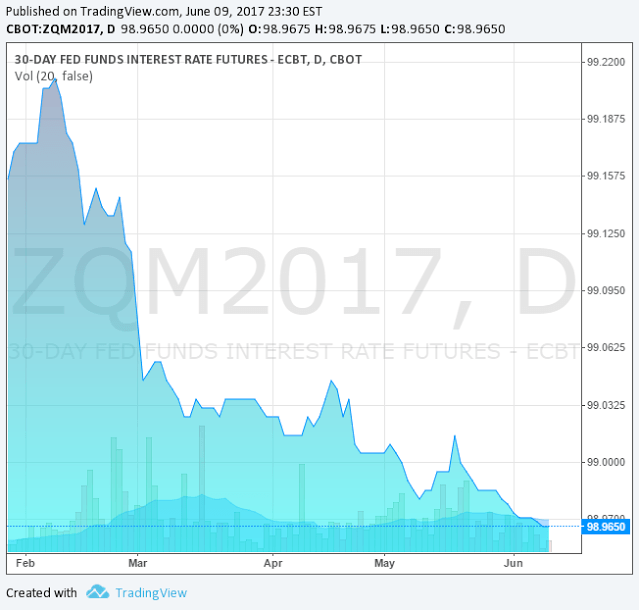 Roughly translated, this is 1.14 (100-) suggesting that the futures markets are expecting rates to be higher, above 1.0%.

According to a poll by the WSJ, economists have assigned a 93% probability for a rate hike this week. On Friday, the CME Futures, Fed funds rate probability closed at 99.6% The data shows that the markets are broadly prepared for the rate hike. Thus, it is likely to have limited impact on the markets. 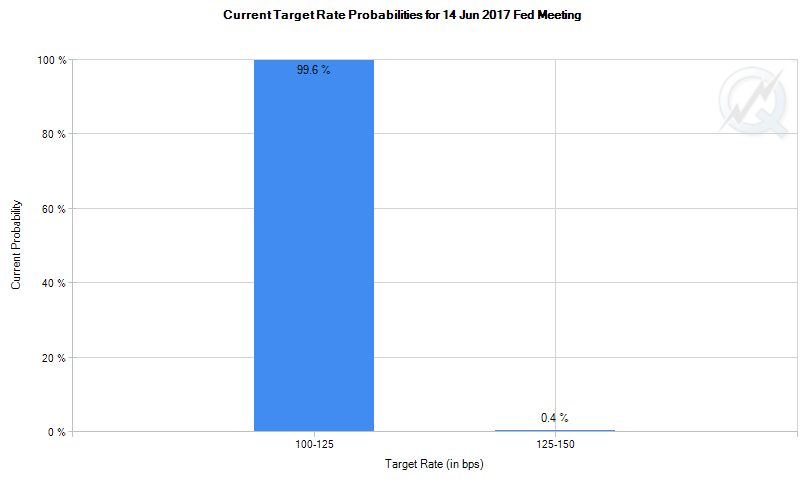 Forward guidance will be key for the markets

With the recent string of weak economic reports which suggest that growth might be witnessing slowing momentum, the questions about the next rate hike from the Fed, along with questions on the Fed's intentions to reduce its balance sheet rank high among investors.

The WSJ's poll, also showed that about 54% of economists agree that the Fed will hike interest rates one more time, most possibly in September. 33% expect that this third-rate hike could come in December.

The Fed had previously signaled three rate hikes this year. After the 25bps rate hike in March, policy makers forecasted two more quarter point rate hikes for the rest of the year.

There will be several factors that will influence the decision from the policy makers. Considering that the economic growth has been wobbly so far, the Fed's dot plot will once again get attention.

The markets would like to know if the Fed will project another rate hike for the remainder of the year.

Likewise, there will be interest in more clarity from the Fed about its intentions to shrink its balance sheet. The Fed's balance sheet stands at $4.5 trillion as the central bank purchased massive amounts of mortgage backed securities (MBS) since the aftermath of the 2008 global financial crisis.

A reduction of the balance sheet will send the longer-term interest rates higher.

Making things somewhat complicated will be the fact that the proposed tax cuts and government fiscal spending will also boost inflation, jobs and the GDP.

Some expect the Fed to be unwinding as early as September, while others suggest this could happen in December.

The unwinding of the Fed’s balance sheet is in some ways considered a form of monetary policy tightening. Thus, it would be quite possible that the Fed will signal its intentions on doing so, while also penciling another rate hike later this year.

Headline inflation in the United States, as seen by the core PCE data has been bucking the trend, staying consistently below the 2% target rate. One of the FOMC members, Lael Brainard, said in late May that the soft trend in inflation is concerning.

“If the soft inflation data persist, that would be concerning and, ultimately, could lead me to reassess the appropriate path of policy,” Brainard said in a prepared statement.

Fed officials are currently thinking of a way to shrink their balance-sheets without disrupting the markets.

It is therefore quite possible that if the mixed signals from the economy continue, the Fed could potentially pause rate hikes but consider cutting back on its balance-sheet.

No matter which way one looks at this, the June FOMC meeting is likely to see a cautious but a confident tone from the central bank.

This could very well translate to some short-term strength in the U.S. dollar.

Besides the Fed’s meeting, the monthly consumer price index (CPI) data will also be coming out this week.