US equities rose modestly even as the country’s bond yields rose. Futures tied to the Dow Jones rose by 123 points while those linked to S&P 500 and Nasdaq 100 rose by 17 and 102 points, respectively. At the same time, the 10-year bond yield rose to 1.85%. The rally was likely because of the positive quarterly results by some of the biggest companies in the country. For example, Bank of America, Morgan Stanley, United Airlines, and Procter & Gamble published strong results. Later today, companies like Netflix, Northern Trust, Travelers, and Fifth Third.

The euro retreated against the US dollar even as analysts started to predict that the European Central Bank (ECB) will hike interest rates in September this year. This happened after the Eurostat published strong consumer price index (CPI) data. The data revealed that the bloc’s inflation rose to 5.0% while the core CPI rose to 2.6%. These numbers are significantly above the ECB’s target of 2.0%. Still, analysts expect that prices will start to normalize later this year. The euro mostly declined because of a statement by Christine Lagarde. She rejected calls to move faster than planned, saying that the economic recovery cycle in the US was higher than that of the EU.

UK equities retreated even after the strong results by companies like Entain and Deliveroo. The FTSE 100 index declined by about 0.16%. In a statement, Deliveroo said that its gross transaction value rose by 70% in the fourth quarter. It also said that its gross margins rose to the range of 7.5% to 7.75%. Meanwhile, Entain, the parent company of Ladbrokes and Bwin, said that it expects its profits to be better than expected. It sees its EBITDA coming between 850 million and 900 million pounds. Other FTSE companies that published strong updates lately are Shell, Tesco, and Burberry.

The EURUSD pair declined slightly after the dovish statement by Christine Lagarde. The pair is trading at 1.1340, which was lower than yesterday’s high of 1.1370. It moved below the key resistance level at 1.1362. On the three-hour chart, the pair is slightly above the ascending yellow trendline. It has also moved slightly below the 25-day moving average while the Relative Strength Index (RSI) has moved slightly above the oversold level. Therefore, the pair will likely keep falling during the American session. 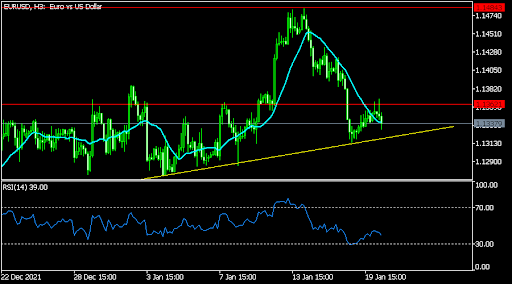 The GBPUSD pair tilted lower even as Boris Johnson announced plans to reopen the country. It moved to a low of 1.3615, which was lower than this week’s high of1.3650. On the four-hour chart, the pair managed to move slightly below the 23.6% Fibonacci retracement level. It also moved slightly below the 25-day moving average. It has also formed a bearish flag pattern. Therefore, the pair will likely drop as bears target the 38.2% retracement at 1.3525. 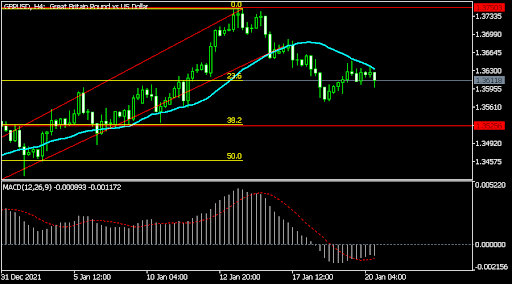 The XAUUSD pair bounced back even as worries of a hawkish Federal Reserve remained. The pair is trading at 1.1840, which was the highest level since November 22. The pair managed to move above the key resistance at 1,830. It also rose above the 61.8% Fibonacci retracement level. Therefore, the pair will likely keep rising, with the next reference point being at 1,850. 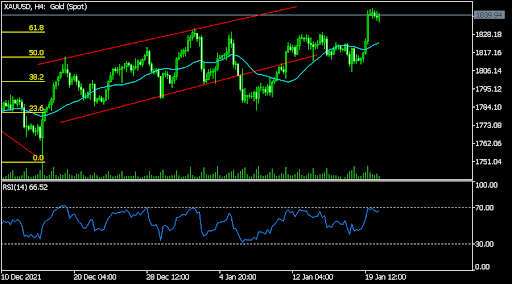