EURJPY has posted a double top around the more-than-seven-year high of 144.25 over the last couple of weeks. The MACD oscillator is extending its positive momentum above its trigger and zero lines; however, the RSI indicator is pointing slightly lower in the positive region. The 20- and 40-day simple moving averages (SMAs) are still developing above the bullish crossover, suggesting that the bull market is still on the cards.

On the upside, resistance could occur around the multi-year high of 144.25 that may be a strong resistance level for traders. Higher still, the peak from December 2014 at 149.75 would increasingly come into scope.

A reversal to the downside could stall at the latest bottom at 141.40, which overlaps with the 20-day SMA ahead of the medium-term ascending trend line near the 140.00 round number. Further below, the 23.6% Fibonacci retracement level of the upward movement from 124.40 to 144.25 at 139.55 could also provide support, while any violation at this point could potentially trigger further sell-off in the market, probably leading the price down to 138.30.

Overall, EURJPY has been completing a double top formation and any declines below the 138.30 support may shift the outlook to bearish. 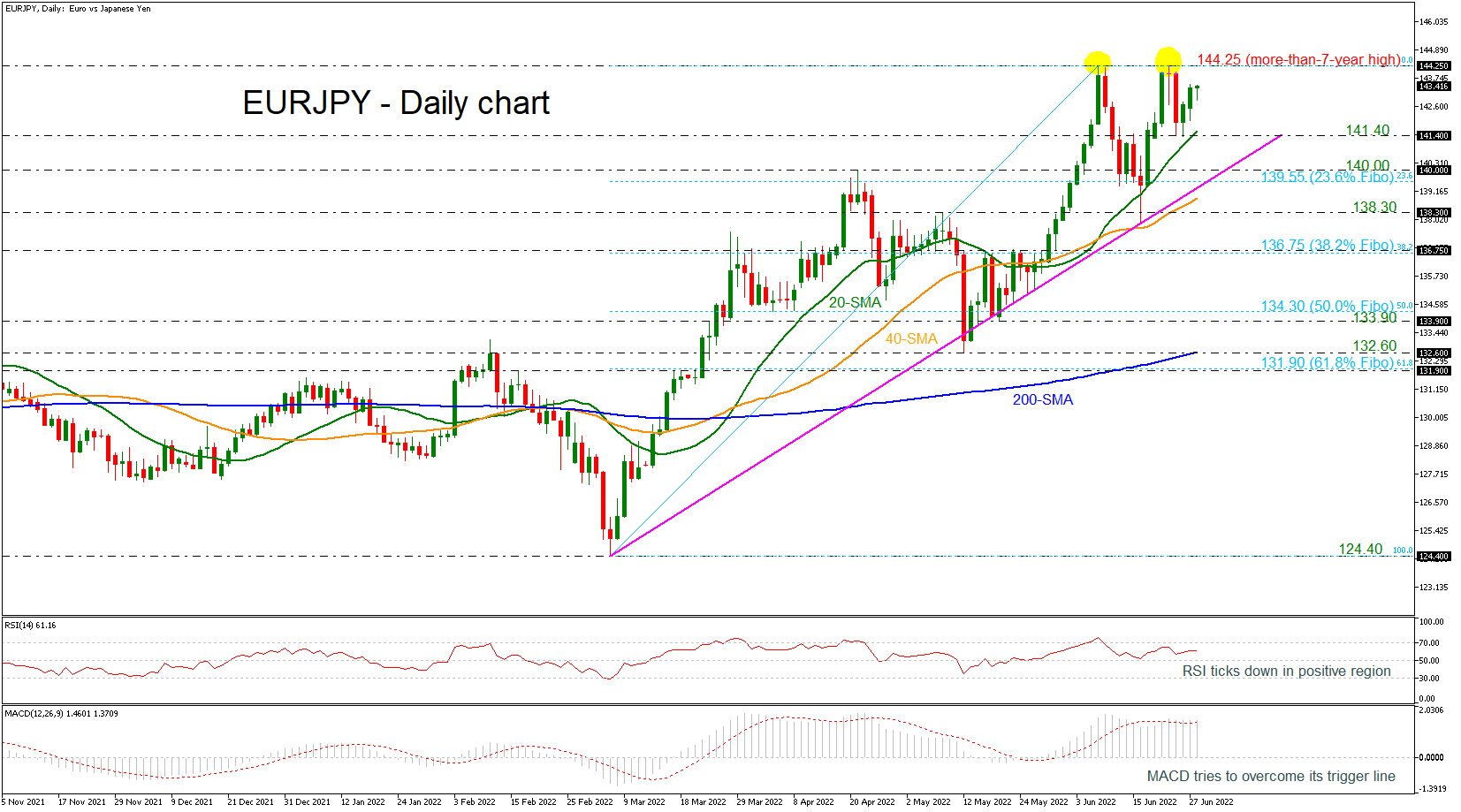 GBP/USD in wait-and-see mode within downtrend

GBPUSD has been tip toeing sideways over the past week within the range of 1.2150 – 1.2356, unable to extend its recovery off two-year lows.

The momentum indicators are reflecting a neutral bias as the latest rebound in the RSI has stalled marginally below its 50 neutral mark, while the MACD continues to grow gradually within the negative region and barely above its red signal line.

As regards the market trend though, the picture remains bearish given the lower lows and lower highs formed below the descending trendline. The falling simple moving averages (SMA) are also promoting the negative direction in the market.

A close above the 20-day simple moving average (SMA) and the 23.6% Fibonacci retracement of the 1.3747 – 1.1932 downtrend at 1.2356 could immediately pause around the descending trendline at 1.2465. The 50-day SMA is positioned in the same area. Therefore, another bullish break at this point could confirm an extension towards the 38.2% Fibonacci of 1.2622, where June’s peak is also placed. Should upside pressures accelerate from here, violating the negative trend pattern, the spotlight will shift up to the 50% Fibonacci of 1.2837.

Looking for support levels, the 1.2250 region has been cooling downside forces over the past week. Should that floor collapse, the 1.2150 restrictive region may come to the rescue, preventing a continuation towards the crucial zone of 1.1988 – 1.1932. In case the downtrend resumes below the latter, a new lower low could be formed around 1.1765, taken from March 2020.

In the four-hour chart, the pair keeps trading within a triangle for the second consecutive week.

In summary, GBPUSD is holding a neutral-to-bearish status in the short-term picture. Failure to bounce above 1.2356, and more importantly beyond 1.2465, may shift attention back to the downside. 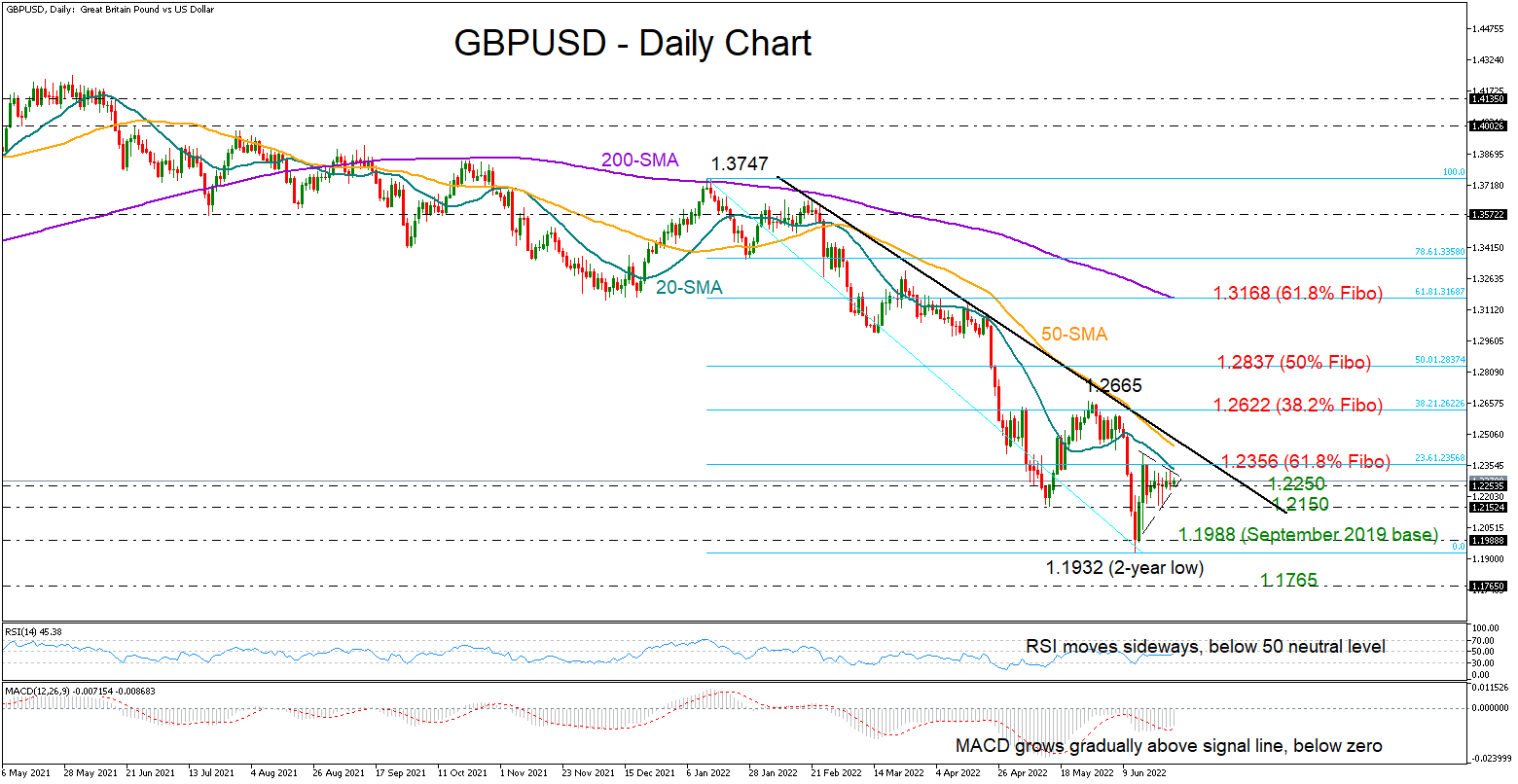