Another week is coming to an end, and the FX market seems unable to find its way. The EUR/USD pair is poised to finish it little changed around 1.1850, its comfort zone pretty much since September started.

Several central banks had monetary policy meetings these days, the US Federal Reserve included but were far from being shining stars. In fact, the impact of the pandemic on economies, and the uncertainty on what’s to come in that front, have policymakers as clueless as speculators.

The US Federal Reserve revised its near-term economic outlook and now sees GDP down 3.7% this year, much better than the 6.5% drop forecasted in June. The unemployment rate is now seen at 7.6% from 9.3% previously. Yet, at the same time, policymakers pledged to keep rates near zero at least until 2023. The central bank added a year to its economic projections, with chief Powell noting that this “powerful” forward guidance will provide support for the economy.

Even further, the central bank indicated that the current levels of QE are appropriate. Economists were expecting the Fed to announce increased bond-buying, but instead, the Fed said that more fiscal support is needed, rolling the ball into the Congress’ side of the court.

And the Fed was not the only central bank that held back. Neither the BOJ nor the BOE introduced changes to their monetary policy, although the last one made some noise by mentioning negative rates. Still, and remembering the ECB’s announcement a couple of weeks ago and also RBA’s Lowe, it seems the subtle intention of central bankers these days is to keep currencies from appreciating, which may hurt the already battered economies.

Within the pandemic context, central bankers have taken extraordinary measures. The crisis remains, and policymakers are reluctant to extend massive easing. It seems they are saving the last bullets should the ongoing tepid recovery suffers a setback.

Macroeconomic figures released these days mostly indicate that, while progress is being made, economic activity remains well below pre-pandemic levels. To mention some of the most relevant numbers, European Industrial Production improved in July, but when compared to a year earlier, it was down 7.7%. The Union’s inflation contracted 0.2% YoY in August. In the US, August Retail Sales posted a modest 0.6% advance, although the core reading printed at -0.1%, below the 0.5% expected.

The focus next week will be on the Federal Reserve Chair Jerome Powell, who will testify before Congress. Given the recent central bank’s meeting, it seems quite unlikely that his words could impact currencies. Also, Markit will publish the September preliminary estimates of its PMIs for the US and the EU. Market’s expectations are of similar readings to August final ones. By the end of the week, the US Census Bureau will publish August Durable Goods Orders, seen up in the month by 1.5%.

The EUR/USD pair is ending a second consecutive week unchanged in the 1.1840/50 price zone. However, it posted yet another lower low of 1.1736 and a lower high at 1.1900. In the weekly chart, the pair continues to develop far above all of its moving averages, with the 20 SMA maintaining its bullish slope above the larger ones. Technical indicators, in the meantime, stabilized well into positive ground, indicating that there’s no interest on the greenback.

In the daily chart, the pair retains its neutral stance. It keeps hovering around a directionless 20 DMA, while the larger ones keep heading north far below it. The Momentum indicator turned marginally lower around its midline while the RSI indicator stands flat around 54.

An immediate support level is 1.1790, followed by 1.1695, August monthly low. However, the greenback remains out of the market favor and a decline towards the latter seems unlikely. If it happens, strong buying interest will likely reappear around it. Resistances, on the other hand, come at 1.1915 and 1.2011, this year high. 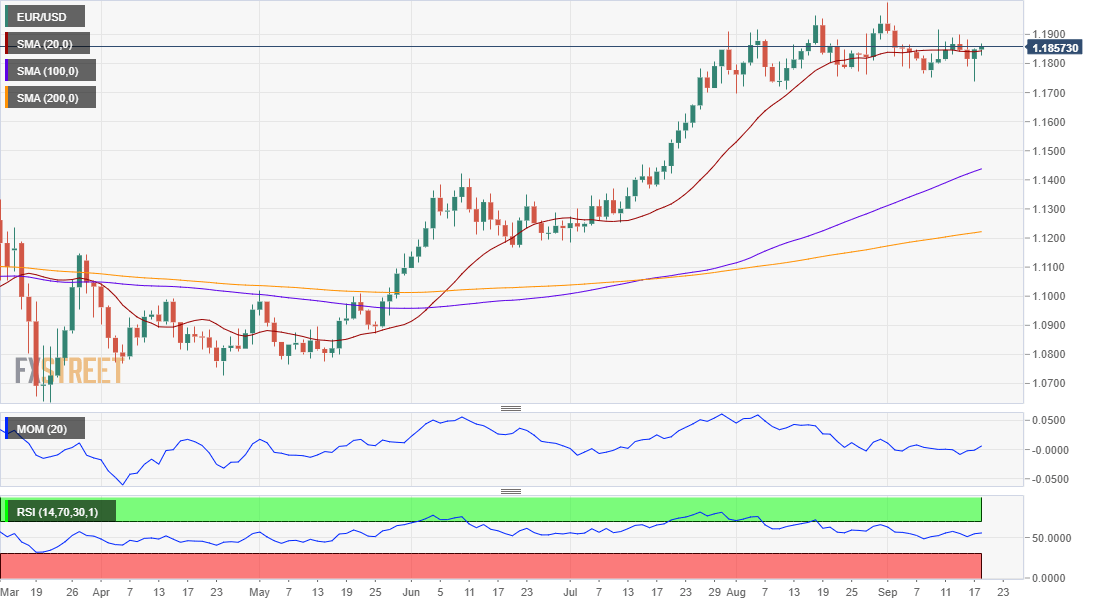 According to the FXStreet Forecast Poll, the pair has reached an interim top.  Bears are a majority in the weekly and monthly views, with bulls taking the lead by little in the 3-month perspective. Anyway, and on average, the pair is seen holding around the current level.

The Overview chart, however, indicates that higher targets are now being considered, reflecting decreasing interest on the greenback. The weekly moving average is heading marginally lower, but the monthly and quarterly ones offer neutral-to-bullish slopes.  Interestingly, and despite the ECB put a virtual cap on 1.20, most targets in the longer-term perspective accumulate around it, with higher possible objectives expected as time goes by.

In a variation of a Wyckoff style schematic, the bulls have accumulated the Aussie at a discount. The price has broken out from within the 'consolidation' following the break of 0.6925 resistance, in a ''sign of strength'' which has encouraged the bulls.

USD/JPY struggles around 135.50 ahead of US Consumer Confidence

USD/JPY is failing to surpass 135.50 as the DXY is trading lackluster. The US Consumer Confidence will bring a significant action in the asset. A mixed performance is expected from Japan's Retail Trade.