A combination of factors assisted the EUR/USD pair to gain strong follow-through traction on Tuesday and climb to the highest level since January. A broad-based US dollar weakness remains a key theme in the market amid expectations that the Fed will retain its ultra-lose monetary policy stance, despite worries about the inflation outlook. Various FOMC officials stuck to the stubbornly dovish view and reiterated that inflationary pressures were more likely to be temporary in nature. Investors now seem aligned with the narrative, which was evident from the continuous decline in the US Treasury bond yields. In fact, the yield on the benchmark 10-year US government bond fell to fresh multi-week lows, around 1.56% and continued acting as a headwind for the greenback.

Bulls seemed rather unaffected by a downward revision of the German Q1 GDP print, instead took cues from an upbeat IFO survey. The Eurozone's largest economy contracted by 1.8% during the January-March period as against 1.7% estimated previously. The negative reading, to a larger extent, was offset by a leading indicator that showed business optimism is rising on the back of a pickup in the pace of vaccinations. According to the closely-watched monthly survey from the IFO institute, Business Climate Index rose to the highest level since May 2019 and came in at 99.2 in May. Adding to this, the Current Assessment sub-index climbed to 95.7 from 94.1 in April and the Expectations Index jumped to 102.9 during the reported month from the 99.5 previous.

On the other hand, the USD failed to gain any respite following the release of the Conference Board's Consumer Confidence Index, which dropped slightly to 117.2 in May from the 117.5 previous. Meanwhile, the Present Situation Index rose to 144.3 from 131.9 in April, while Expectations Index fell from 107.9 to 99.1 during the reported month. Apart from this, the underlying bullish sentiment in the financial market further undermined the safe-haven USD and remained supportive of the pair's positive move. That said, a modest pullback in the US equity markets prompted some selling at higher levels, through the dip was quickly bought into. The pair finally settled with decent intraday gains and held steady above mid-1.2200s through the Asian session on Wednesday.

Meanwhile, a modest bounce in the US bond yields extended some support to the USD and capped any strong gains for the major. That said, a generally positive tone around the equity markets held traders from placing any aggressive bets around the safe-haven USD and allowed the pair to edge higher for the third consecutive session. There isn't any major market-moving economic data due for release either from the Eurozone or the US. Hence, the US bond yields and the broader market risk sentiment will continue to play a key role in influencing the USD price dynamics. This, in turn, should provide some impetus to the major.

From a technical perspective, the overnight sustained move and acceptance above the 1.2240-45 region has paved the way for additional near-term gains. The constructive set-up is reinforced by bullish technical indicators on the daily chart, which are still far from being in the overbought territory. Hence, a subsequent move towards reclaiming the 1.2300 mark, en-route YTD tops around mid-1.2300s, looks a distinct possibility.

On the flip side, any meaningful pullback below the 1.2240-45 resistance breakpoint might now be seen as a buying opportunity. This should help limit the downside near the 1.2200 mark. This is followed by support near the 1.2160-50 region, which if broken decisively will negate the constructive outlook and prompt some technical selling. 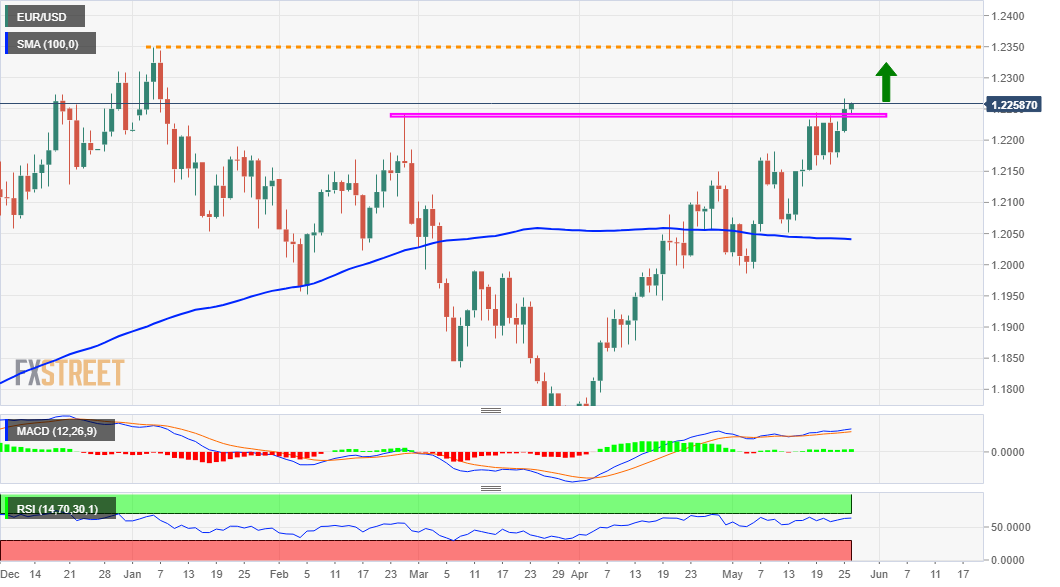